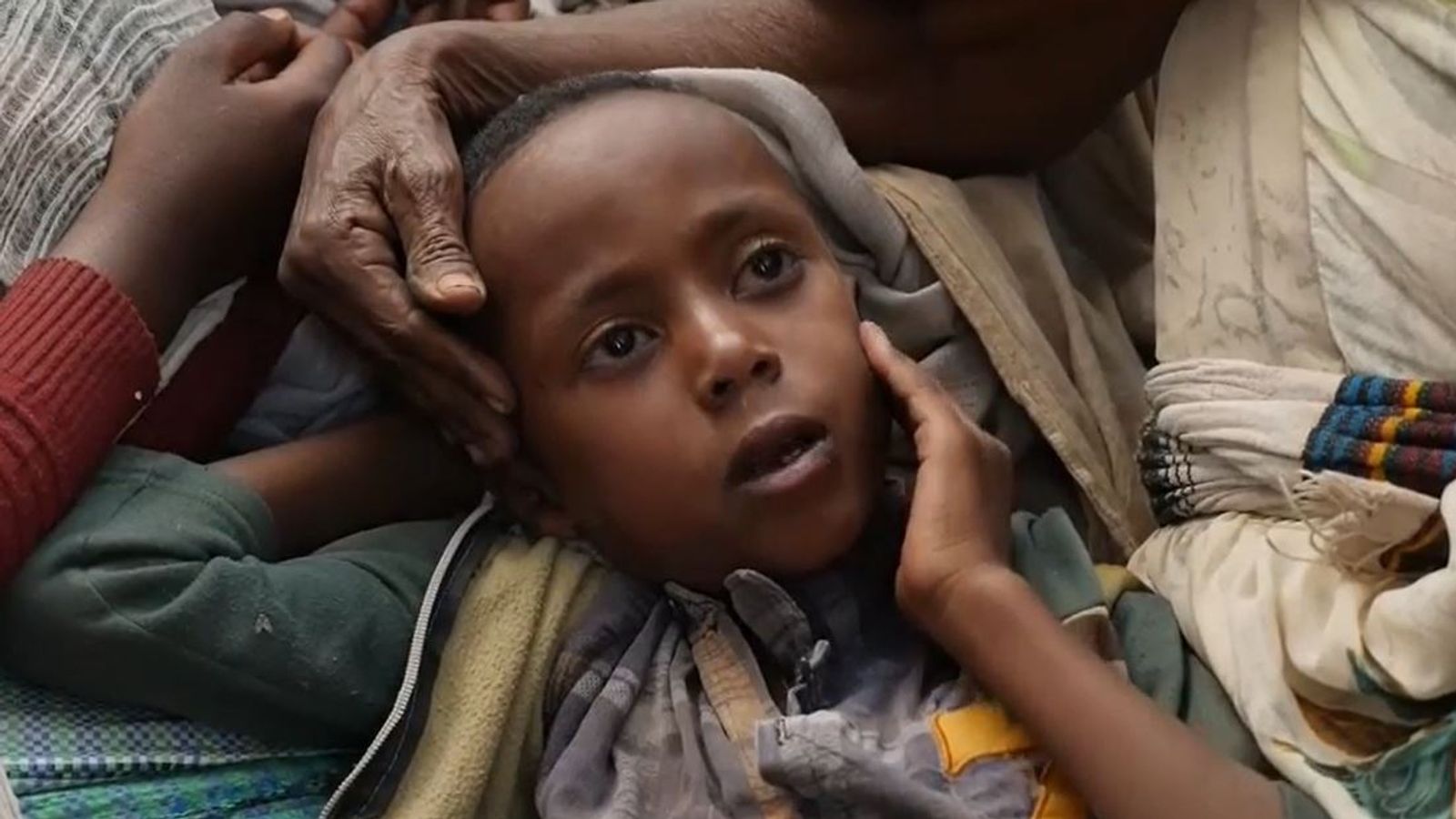 The Tsehaye Elementary School in Shire, Ethiopia, offers some sort of sanctuary, a place of refuge for people on the run.

But there is not much here to keep them alive.

A human tide of 300,000 Tigrayans are now camping in this beleaguered city at six schools, a local college and any number of half constructed buildings which dot the city.

After four months of warfare between Ethiopia’s national defence force and fighters from the Tigray People’s Liberation Front (TPLF), more than 500,000 Tigrayans have lost their homes.

The majority here have made a hazardous journey from western Tigray. Some have been forced to flee their homes, others have been banished by militias from the neighbouring region of Amhara.

The US government, amongst others, has condemned the violence and declared these evictions ‘ethnic cleansing’.

At Tsehaye Elementary, buses and trucks piled up with people’s basic possessions, stop outside the school’s front gate every few minutes.

We stopped one woman called Letay Teweldebrehan who had arrived in Shire with her daughter just before nightfall.

“It must be a difficult time for you,” I said.

“Yes, very much, I cannot explain it. We came because of the war. We have been robbed of our things and our animals were taken.”

She told me she was a civil servant from a city called Humera and I asked why she felt she had to leave.

“I work in water development but I have not received my salary for the last four months. We don’t have water, no electricity or medicines. Life is not possible.”

As she readied herself for the night ahead, I asked where she thought she was going to sleep.

“I don’t know where. I have left my bed behind.”

There is no space left in the classrooms and the school playground is packed with families wrapped in blankets or balanced on bits of school furniture.

But if Ms Teweldebrehan does find a few square feet she will struggle to find anything else on offer.

Atsede Kidane, a mother of three, has been camping at the school for the past six weeks and she says the interim administration which now runs this region has not provided the residents with a single item of food.

She said: “Since registering here on 28 January I haven’t received a thing. My children are dying of hunger. We’ve had nothing so far.

“People are getting sick because they’re hungry. People are dying.”

Humanitarian organisations could not get into Shire until early March and although Ethiopia’s Prime Minister Abiy Ahmed has now given them “unfettered access” in Tigray they must operate in the region at their own risk.

His government declared the “law and order operation” – launched against the people who ran Tigray, the Tigray People’s Liberation Front (TPLF) – a success in late November and it is not clear why it has been so slow to offer aid organisations access.

The delay raises important questions – has the central government been trying to hide serious human rights violations conducted by Ethiopian troops – as well acts committed by allied soldiers from Eritrea and Amhara region of Ethiopia?

Alternatively, does this foot-dragging reflect the fact that Ahmed’s administration has failed to bring large parts of the region under its control?

These matters are no concern of a priest called Teklehaimanot, who has brought his family of eight to Tshaye Elementary School.

His 28-year-old son, Fitsum, contracted a mental illness in the third year of university and his parents have found him difficult to control in the camp. They have decided to chain him to a wooden beam.

“It’s very difficult, we cannot sleep. At night, he tries to go out and he bothers the children, so we have to chain his hands and legs.”

When the feared Amhara militia called ‘Fano’ turned up, they took everything the family possessed.

“This is my son, because of son, I cannot go anywhere. I don’t even have clothes.

“This is what I have. Everything has been taken, this is it.”