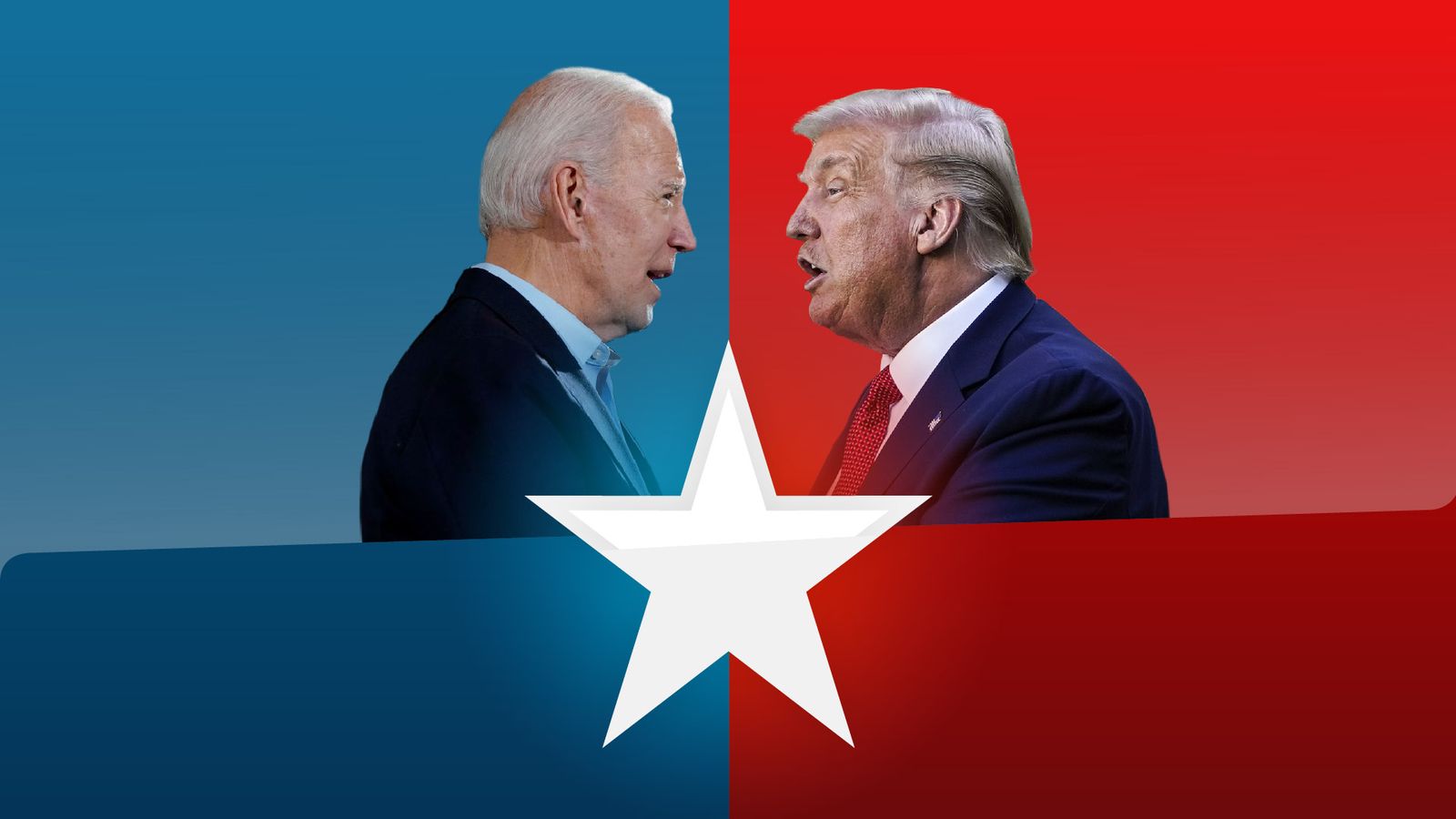 Over the coming weeks, the world’s attention will turn increasingly to the US, where the next presidential election is due to take place.

Read on for all you need to know on all the key dates, who’s who, and how it works.

The next US presidential election takes place on 3 November.

The presidential debates take place between 29 September and 22 October.

The incumbent Republican president is Donald Trump. He will be running alongside his vice president Mike Pence.

Mr Trump has proved one of the most divisive presidents in recent US history, after his controversial 2016 run that saw him switch from being a reality TV star and businessman to an outspoken campaigner who appealed to a particular “base” with his nationalistic, pro-American rhetoric.

He quickly courted disquiet with a move to ban immigrants from Muslim countries, but won plaudits for a tax-cut package that many commentators say boosted the US economy.

His “America First” policies have angered many on the international stage, particularly China, which Mr Trump sees as benefiting unfairly from an unbalanced world trade system, and have caused concern on the markets, and his withdrawals from the Paris climate accord, the Iran deal and other agreements have drawn many critics.

Many doubted whether he would last the full four-year term – particularly as he faced an impeachment trial over allegations he solicited the investigation by Ukraine of his rival Joe Biden, and previously faced a special counsel probe by Robert Mueller. But he survived and came back fighting.

His running mate Mr Pence has remained relatively in the background while his boss has taken the limelight, but has taken some flak for heading up the White House Coronavirus Task Force in a country that has seen some of the worst rates of infection and death in the world.

The party’s nominee is Joe Biden. He has chosen California senator Kamala Harris as his pick for VP.

Mr Biden was Barack Obama ‘s vice president between 2009 and 2017, and had better approval ratings for his time as number two in the White House than Mr Pence.

He was a long-time senior US politician before he was chosen by Mr Obama – and the ex-president trusted Mr Biden with overseeing a number of negotiations over budgeting and financial issues on Capitol Hill.

His decision to run this time came amid one of the most sought after tickets for the nomination in years, with dozens of potential Democratic candidates seeking the position, which he eventually breezed, despite several allegations from women of inappropriate physical contact and one of sexual assault.

If elected, he would become the oldest president to take office, at the age of 78.

Ms Harris, the first woman of colour on a vice presidential ticket, was also a contender in the Democratic primaries to choose a challenger to Mr Trump.

Like Mr Biden, the senator is on the moderate wing of a party that also saw many progressives – most notably the Vermont senator Bernie Sanders – among those also vying to be chosen. She is much younger at 55.

How does it work?

Each state is allocated a set number of electors, who make up what is known as the US electoral college.

Rather than voting directly for a president, voters are allocated electors from the electoral college, depending on the number of votes for each candidate.

In most states, if voters choose one party over another, electors back that party’s candidate.

The candidate that gets the support of at least 270 electors wins.

When are the TV debates?

The campaign has already started, but interest will peak with the televised live presidential debates , which are organised by the Commission on Presidential Debates.

Last time, in 2016, some 84 million people tuned in to see Mr Trump and Hillary Clinton go head-to-head, setting a record for the number of viewers.

The final debate takes place on:

Even at the start of his presidency, Mr Trump was less popular than any president since the Second World War.

Although his approval rating has improved slightly since it hit its lowest point in December 2017, it is still below that of most modern presidents by the same stage of their first term, apart from George HW Bush and Jimmy Carter – both of whom lost.

With Mr Trump’s approval ratings being so low, many observers say he will struggle to recover enough to win a second term.

But their success in the House came at the expense of victory in the Senate, where they actually lost ground due to results in the third of seats that were contested.

The national polls have put Mr Biden consistently ahead since he emerged as presumptive challenger.

FiveThirtyEight, a national poll data analysis organisation which crunches all the numbers and has been correct on a number of occasions in the past, says Mr Biden is the favourite to win.

But Mr Trump has demonstrated that he loves a challenge and is a capable campaigner.

What are the big issues?

According to a poll carried out by Pew Research in early August, the economy remains firmly the most important issue for voters, as it was two years before.

But Pew found a wide divergence among voters with different voting intentions.

Trump supporters were more likely to rate the economy as important, whereas Biden supporters viewed health care and the coronavirus response as being most relevant to their selection.

Likewise, race and ethnic inequality provoked a widely divergent range of opinion, with 76% of likely Biden voters saying it was very important to their voting intentions, compared to 24% of Trump voters.

With coronavirus having had such a major impact on the US economy – despite recent stock market recoveries – and with the Black Lives Matter movement making such an impact on national politics, it is difficult to see how these priorities will play out, considering how little is known about how important all the factors are to Americans of all leanings.

Climate change remains important for Biden supporters, but is almost completely unimportant to Trump backers. The environment has been overridden by the COVID-19 pandemic this year, while gun control – which was a huge issue under Obama – is of only moderate concern to both sets of voters.

While Mr Trump was less popular after two years than Mr Obama and Bill Clinton were, the president no doubt took heart from the fact that he was not far behind where they were at the same stage.

Mr Obama saw his popularity rating dip consistently in the first three years of office, until it began to rise again before he fought his second election. He eventually won 332 electoral votes to 206.

At an earlier stage, Mr Clinton had actually been even more unpopular than Mr Trump was at the midpoint and yet still went on to win a second term easily.

Significantly, there were other presidents who had approval ratings lower than Mr Trump’s.

Harry Truman saw his popularity plunge to 33% a year-and-a-half into his presidency following a wave of strikes. As the economy and international sphere became more important, his ratings improved in time to win a second term.

Due to other matters, however, he ended up one of the most unpopular presidents in US history.

When will the result be known?

Although the election takes place on 3 November, because the US covers so many time zones, it is not until the following day that the last polls close.

Traditionally, the result is often known by the time polls close on the West Coast – about 11pm EST and 4am GMT.

It can be complicated working out when the winner has crossed the finish line because of the electoral college system, which allocates different numbers of votes depending on a state’s share.

But this year could be different.

There has been a lot of concern expressed in the last few months about postal voting – which is expected to be considerably more important this time around because many people will prefer to mail in their ballot paper rather than visit a polling station in the middle of the ongoing pandemic.

Mr Trump has already said he has concerns that there could be voter fraud as a result.

But critics of the president have claimed he is falsely stoking concerns, perhaps because he is preparing to challenge the result – assuming he loses – and may even refuse to leave office.

If that were to happen, a legal challenge would be inevitable – with the conservative-leaning Supreme Court likely to make the ultimate call.

Whoever is victorious, assuming any challenge can be dealt with quickly, the winner would be expected to be approved by 6 January and inaugurated 14 days later.