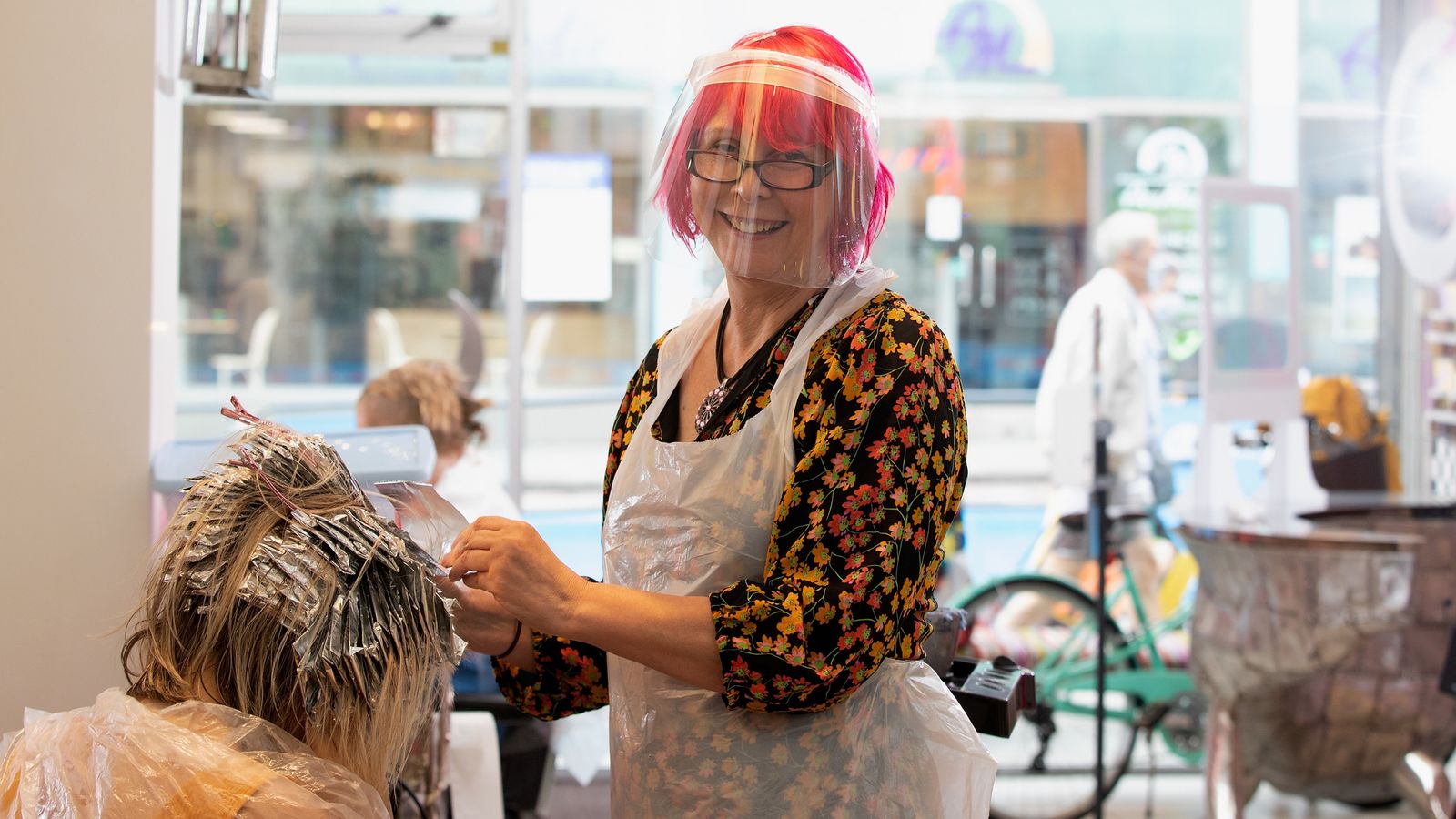 Pubs, hair salons and camp sites were among the businesses reopening on Saturday after more than three months of lockdown. Sky’s reporters were out and about hearing from owners and customers.

Sadiya Chowdhury was at Hershesons hair salon in London:

Lauren Saul, customer: “Well it’s eight o’clock in the morning on a Saturday and I’m here, so [getting a haircut is] definitely important. It’s definitely a priority and it’s really exciting to be pampered again.”

David Hazel, customer: “My last hair cut was about three months ago. It’s so urgent, especially with places opening up now. I had an appointment before lockdown came and cancelled it, so I came really early to get it done today.”

Simon Boston: “Just great to get away, to be honest – we’ve been cooped up for so long, stuck at home, so it’s just nice to get out in the fresh air. It’s easy to social distance when you’re camping as well, so it’s great.”

Trudy Jarvis: “We’ve driven from High Wycombe overnight and we stayed in the car park until we were allowed to come in. St Ives is lovely. If you haven’t been, you really should go. It’s going to be a different kind of holiday, hopefully not too different with social distancing and how it’s going to work in the restaurants… but we’ve got a spreadsheet as we’ve had to book all our restaurants in advance.”

Amelia Jarvis: “We booked everything, my daughter is very efficient. She’s joining us next week for our second week and she’s booked the whole variation of restaurants we need but she had to get in the minute it opened. We’ve just been waiting on the 4th of July because we booked this time last year and we’ve been keeping our fingers crossed for the 4th of July. So far it’s all worked out well.”

Lisa Dowd was in Leicester:

Leicester is in a different situation – it was returned to lockdown rules last week after a spike in coronavirus cases. Only essential businesses are open.

Shinto Baby, grocer: “To be honest [customers are] scared. Some of them, they don’t care. But most of them are scared, you know – especially people with kids. They pick it up from the street and bring it home and they’re just kids. So they’re scared. That’s why a lot of people stay at home”

Michelle Teale has incurable cancer and had planned to form a “bubble” with her mother who lives 100 miles away.

“I was like, ‘Hooray, Mum we can finally get that hug again’. I was planning to go on the 11th and had to say, ‘Mum, we can’t do it’. I was upset. I don’t cry very often. I was deflated, gutted, I’d waited all this time, followed the guidelines, and it was stripped away in a heartbeat, very frustrating.”

Katie Spencer was at The Thatched Tavern in Ascot:

Owner Laurence Coveney: “It’s been a bit of a trek but it’s good to get the staff back in and see the customers’ faces, many of whom we haven’t seen in months.

“You’ll be seated at a table, you won’t be standing at a bar. It’ll be table service. We’ve got sanitisers and a one-way system operating. It’s a case of common sense, really, and doing as much you can to make people feel safe.”

Peter Miles, customer: “I was a bit nervous at first but I’m alright now. I think you’d go insane if we carry on as we have been doing. You’ve got to get out.”

Maria Hannison, customer: “We’ve come out for a sandwich and a drink. If everybody keeps doing their hands and keeps apart, then it’s safe. I have a son who’s a chef and you need to try and get out, otherwise they have no jobs.”

Katerina Vittozzi was in Manchester:

Nancy, Lauren and Alyssa are from Stoke-on-Trent and have come to Manchester for a night out.

“We’ve already been to one bar and it was quite empty, to be honest,” said Alyssa.

“Everyone is social distancing and we feel really safe. We don’t feel like we’re at risk. The weirdest thing was having to take the train in.”

Laura said: “It feels so amazing to be out and we want to support the hospitality industry because if we don’t, when we do come out of lockdown we’re going to have nothing to come out to.”

Andrew Jackson, a St John Ambulance volunteer, is working in the charity’s mobile treatment centre in the city centre tonight.

“We’re here and in six other locations across England tonight,” he said. “The reality is we don’t know what we’re expecting but we can deal with anything, from someone with a blister on their foot to someone having a cardiac arrest.

“So far it’s been okay but it’s still early and the night can change very quickly.”