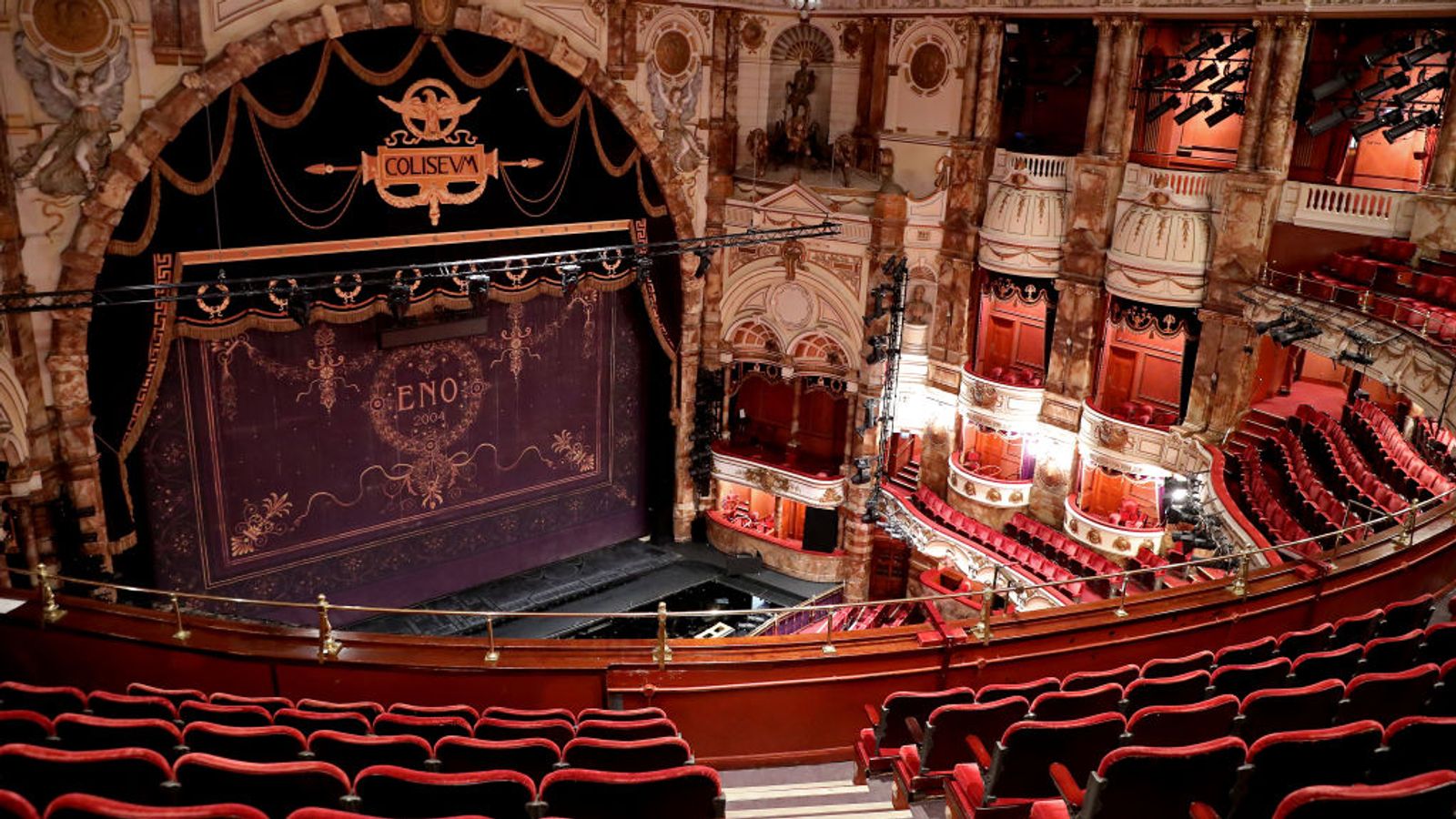 A massive £1.57bn coronavirus lifeline for the arts is being promised by the government, but theatres and music venues could still remain closed until next year.

The emergency cash aid, in grants and loans, has been welcomed by leading figures from the arts, but there will be dismay that there are still no plans to resume live performances.

There are fears that many theatres, concert halls and other venues may not re-open until next summer, which would mean them remaining closed through Christmas – with no panto season.

Labour has dismissed the handout as “too little, too late” and a top Tory MP said it would only provide temporary help – and claimed social distancing does not work for theatres and other venues.

Announcing the rescue package, Boris Johnson appeared to acknowledge that the return of many theatre productions, musicals and concerts of all sizes would not be possible in the foreseeable future.

“From iconic theatre and musicals, mesmerising exhibitions at our world-class galleries to gigs performed in local basement venues, the UK’s cultural industry is the beating heart of this country,” the prime minister said.

But he added: “This money will help safeguard the sector for future generations, ensuring arts groups and venues across the UK can stay afloat and support their staff whilst their doors remain closed and curtains remain down.”

The government says it is working to get the performing arts back up and running as soon as it is safe to do so and is being guided by medical experts. Guidance for a phased return will be published shortly.

The £1.57bn lifeline comes after frantic lobbying by the arts world, the closure of the Nuffield Theatre in Southampton and even claims that the Royal Albert Hall will go bust without urgent funding.

It is estimated than 350,000 people in the recreation and leisure sector have been furloughed since the pandemic began. But that scheme is due to end in October.

Under the new scheme, organisations from the performing arts and theatres, heritage, historic palaces, museums, galleries, live music and independent cinema will be able to apply for emergency grants and loans.

The government claims the money represents the biggest ever one-off investment in UK culture and will help organisations facing closure and bankruptcy stay afloat while their doors are closed.

• A £1.15bn support pot for cultural organisations in England delivered through a mix of grants and loans. This will be made up of £270m of repayable finance and £880m grants

Oliver Dowden, the culture secretary, said: “I understand the grave challenges the arts face and we must protect and preserve all we can for future generations. I said we would not let the arts down, and this massive investment shows our level of commitment.”

But Labour’s shadow culture secretary Jo Stevens said: “Whilst we welcome the announcement of a much-needed injection of cash into the sector, for many this is too little too late.

“The government needs to ensure that this vital funding gets to those theatres and other organisations currently teetering on the brink and fast – especially those across the towns and small cities where live performance venues and other arts organisations are so valuable to local economies providing many interdependent jobs, particularly in hospitality.”

Tory MP Julian Knight, who chairs the Culture Select Committee, said: “This is the first step to help prevent some of our major cultural institutions from going under.

“This money is welcome and should take some out of the danger zone, if only temporarily. But to secure their long-term future there needs to be a targeted sector deal, possibly involving more generous tax breaks.

“We know that one-metre social distancing doesn’t work economically for most theatres and venues in the UK. We ultimately need to have a means by which these organisations can open safely and gain the confidence of the public.”

There has been a warm welcome for the government aid from leading figures in the arts world, however.

National Theatre director Rufus Norris said theatre companies across the country “stand ready to respond with creativity and commitment, and to reopen as soon as is safe”.

“We feel very positive that this major investment will reach and sustain the vital talent and infrastructure – both organisations and freelancers – which make British theatre truly world-leading,” he said

Composer and impresario Andrew Lloyd Webber, whose musicals have run for decades in London’s West End, said: “This news is truly welcome at a time when so many theatres, orchestras, entertainment venues and other arts organisations face such a bleak future.”

Playwright James Graham, author of top West End, TV and film hits, said: “In normal times, we are a profitable and world-beating industry, and we can be again.

“The scale and the ambition of this package is incredibly welcome and I have to say a huge relief to the hundreds of thousands of skilled workers, not to mention millions of audience members, who want to be able to get British culture back up and thriving as soon as it is safe to do so.”

And Sir Nicholas Serota, chairman of Arts Council England, said: “I know our amazing artists and creative organisations will repay the faith that the government has shown by demonstrating the range of their creativity, by serving their communities and by helping the nation recover as we emerge from the pandemic.”