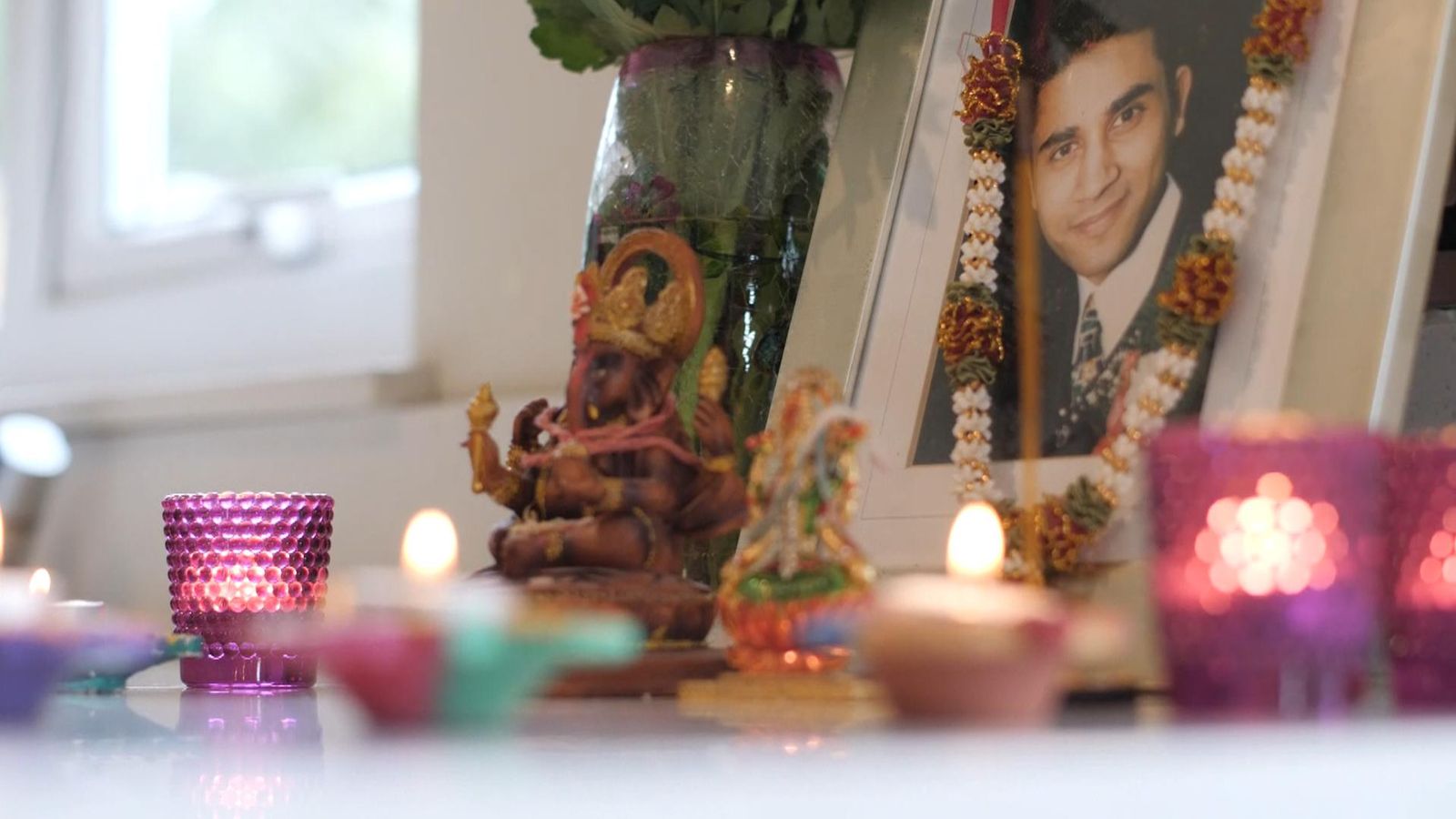 The widow of a community pharmacist who died from COVID-19 has spoken of the heartbreak of not being able to see her husband before he passed away.

Kanan Patel fought back tears as she described how her husband Jayesh “walked towards the ambulance in his slippers” and said that was the last time she saw him.

“He looked just like a skeleton. He had lost so much weight. He said to me ‘get me a spoon because I can’t drink water with a glass’.”

Mrs Patel believes her husband caught the virus as he dispensed medicine in a local pharmacy.

As a key worker she was very worried about him contracting COVID-19 but she says he always took precautions to protect himself and his family as much as he could.

As her husband’s condition deteriorated, Mrs Patel felt “something was not right”. That is when she called the ambulance.

“He just went out in his slippers. I didn’t know he wasn’t going to come back.” It was the last time she saw her husband alive.

When they spoke on the telephone after Mr Patel was admitted to hospital, he asked his family to pray for him.

The last text Kanan received from Jayesh was after the doctors treating him confirmed he had COVID-19. He was then moved into intensive care and placed on a ventilator.

“I had a call from the consultant. He said ‘We can’t do anything for him. We are giving him 100% oxygen but nothing is going through’.”

Mrs Patel was certain her husband would recover. She urged the hospital not to take him off the ventilator.

But when Mr Patel’s condition deteriorated further, Kanan went to the hospital with some holy water and a small idol of the Hindu god Ganesh. She handed these over to a nurse in the hospital car park and asked that the holy water be placed on her dying husband’s lips in accordance with her faith.

At 11am the next morning the same nurse phoned Mrs Patel to tell her that Jayesh had passed away and she had carried out Mrs Patel’s wishes.

“That’s how my goodbye to him was.”

Jayesh Patel is one of the tens of thousands of COVID-19 victims who were remembered on Saturday in a special tribute at St Paul’s Cathedral and when landmark monuments across the capital were cast in blue light.

World famous buildings including Downing Street and Wembley Stadium turned blue on the eve of the 72nd birthday of the NHS.

To mark the occasion, Boris Johnson will meet NHS workers in the Number 10 garden on Sunday afternoon before a nationwide round of applause at 5pm.

Speaking at a Downing Street press conference on Friday, the prime minister urged the public to clap for “those who have worked tirelessly and selflessly to help the nation get through this pandemic”.

The initiative follows the success of the weekly Clap for Carers, and it is hoped the applause will become an annual tradition.

NHS chief executive Sir Simon Stevens said he hopes the public will use the anniversary as an opportunity to “say a heartfelt thank you” to hospital staff.

Sir Simon said: “This year has been the most challenging in NHS history, with staff displaying extraordinary dedication, skill and compassion to care for the 100,000 patients with COVID-19 who needed specialist hospital treatment and many others besides.

“During this testing time our nurses, doctors, physios, pharmacists and countless more colleagues were sustained by the support of the public, not least through the weekly applause for key workers.

“No health service, not even the NHS, could have coped alone with this coronavirus pandemic.”

The government’s latest figures showed that 44,131 people have died after testing positive for coronavirus in the UK as of 5pm on Thursday.