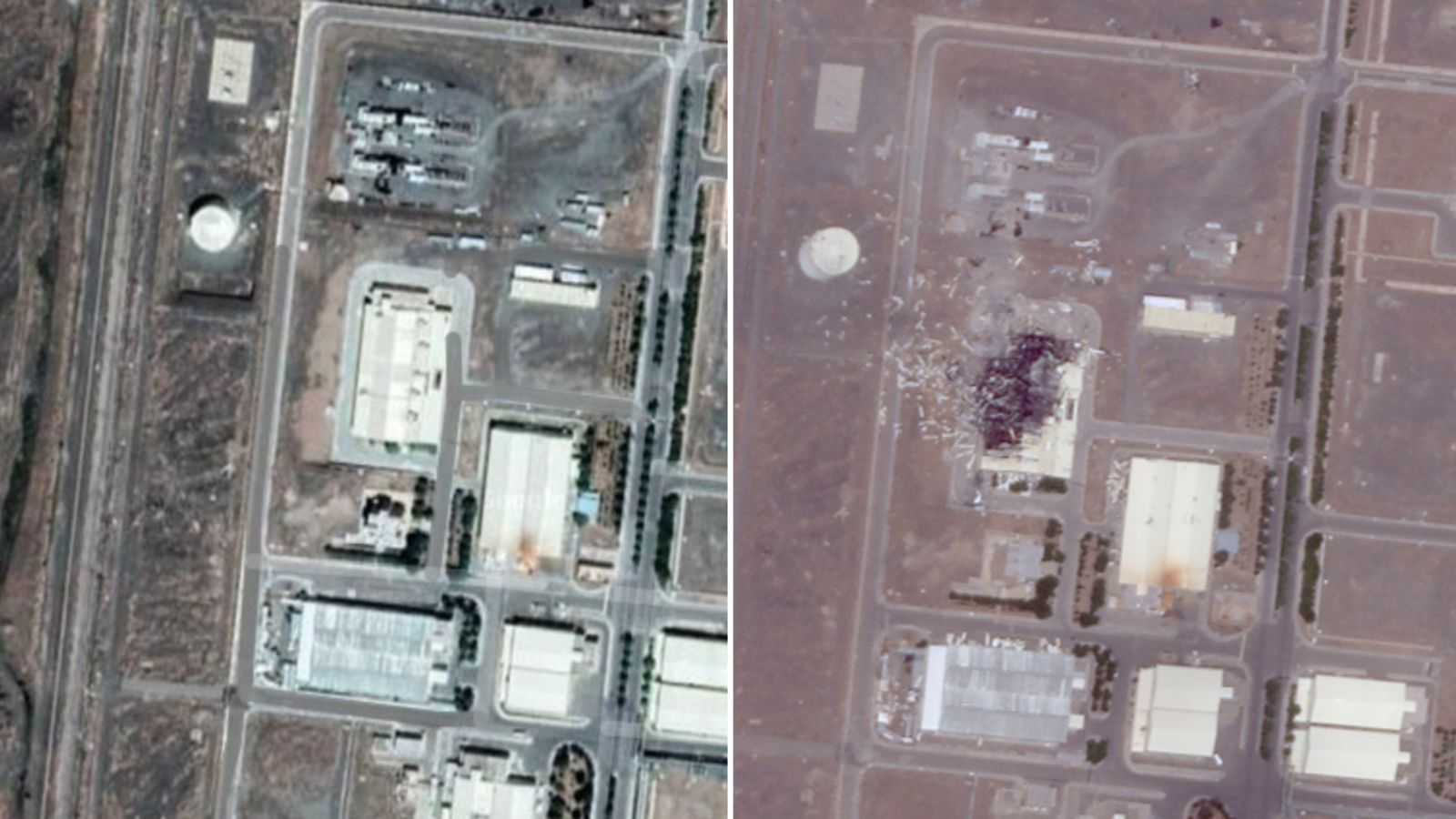 There have been six curious incidents over the past couple of weeks in Iran.

On the face of it, they are unconnected. But as conspiracy theories abound, what do we actually know? Could they be attacks? Who could be behind them and why?

26 June: An explosion at a weapons depot in Parchin near Tehran. Hours later, 600 miles south in Shiraz, the power went out.

30 June: An explosion killed 19 people at a medical clinic in central Tehran.

2 July: An ‘incident’ was reported by Iranian media at the Natanz nuclear facility.

3 July: A huge fire in Shiraz, the same town hit by the power outage days earlier.

4 July: A fire at a power station in Ahvaz in southern Iran.

What do we know about each incident?

The explosion took place early on the morning of 26 June. Footage captured by locals showed a huge arc-like explosion lighting up the sky.

The Iranian defence ministry claimed it was the consequence of a “gas storage facility” leak at the Parchin military base.

Iranian media was given access to a site showing a small hole in a gas tank inconsistent with the images of a huge explosion.

Open-source satellite images released by the weekend showed a large burnt patch of land. It was not located within the military base, as Iran had claimed, but next to it, at a missile production facility in Khojir.

Officials from the Israeli prime minister’s office and the Israeli Defence Force both declined to comment.

The Khojir missile complex, part of the wider Parchin military zone, is understood to contain a research, development and manufacturing facility.

Parchin was visited by nuclear inspectors in 2015 after renovations to the facility prompted international suspicion of nuclear activity.

Six-hundred miles to the south of Parchin, at almost the same time, a power cut hit the city of Shiraz.

Shiraz is home to a major air base and the Iranian military’s 55th Airborne Brigade.

No explanation has been given for the cut.

Nineteen people died on 30 June after an explosion at the Sina Athar clinic in Tehran.

Iranian media said the explosion was the result of a gas leak.

The explosion happened at about 2am on 2 July.

State media was given a tour of the facility the same afternoon.

A spokesman for the country’s Atomic Energy Organisation confirmed minor damage and said there was no risk of radioactive pollution.

The New York Times then quoted an unnamed Middle Eastern intelligence official as saying that “the blast was caused by an explosive device planted inside the facility. The explosion… destroyed much of the above-ground-parts of the facility”.

Other reports have suggested the explosion might have been caused by a cyberattack. In 2010, high-speed centrifuges at the same facility were knocked out by the Stuxnet computer worm.

Experts have variously attributed the origin of Stuxnet virus to Israel and the US.

Natanz is at the centre of the Iranian nuclear programme and is on the International Atomic Energy Agency’s list of nuclear sites of interest.

Some of the country’s more sophisticated uranium enrichment centrifuges are thought to be assembled at Natanz.

Iranian officials have now conceded that significant damage was caused in the 2 July incident.

Relying only on social media reports, it’s thought the fire was in the Zargari area of the city.

A fire knocked out a power station transformer in the southwestern city of Ahvaz on Saturday.

Al Arabiya TV quoted a firefighter as saying that one of the generators had exploded.

There is no known military or nuclear facility in Ahvaz.

Coincidental incidents or part of a coordinated attack?

Asked about the incident in Natanz, Gabi Ashkenazi said: “We have a long-term policy… not to allow Iran to have nuclear abilities.

“This regime with those abilities is an existential threat to Israel… we take actions that are better left unsaid,” the foreign minister said.

It follows a pattern by Israel of neither confirming nor denying involvement in attacks which take place frequently against Iranian targets in Syria and Iran.

Israel is increasingly concerned by what it sees as the growing danger posed by Iran’s nuclear weapons programme and its attempt to supply regional proxies – such as Hezbollah in Lebanon – with precision-guided missiles.

In 2011, an explosion in Iran killed a key architect of the country’s missile programme. It knocked Iran’s nuclear programme back by several years and was attributed to Israel.

A UN arms embargo on Iran is due to expire in October. There is a broad diplomatic effort led by Saudi Arabia and the US, supported by Israel, to extend it.

On Thursday, Iranian officials hinted that the Natanz incident was a cyberattack and “sabotage” by Iran’s enemies. But they stopped short of accusing Israel or the US.

“If it is proven that our country has been targeted by a cyber attack, we will respond,” civil defence chief Gholamreza Jalali told state TV.

Asked about the incidents at strategic sites in Iran, Israeli Prime Minister Benjamin Netanyahu told reporters: “Clearly we can’t get into that.”

With Iran, the United States and Israel dealing with significant new spikes of coronavirus, it seems unlikely that any of them wants to be drawn into conflict.

But Iran now says that the incident at the Natanz facility caused significant damage, potentially setting back its production capability.

If the Iranian regime concludes formally that it was a cyber attack then they may want to be seen to respond in kind.