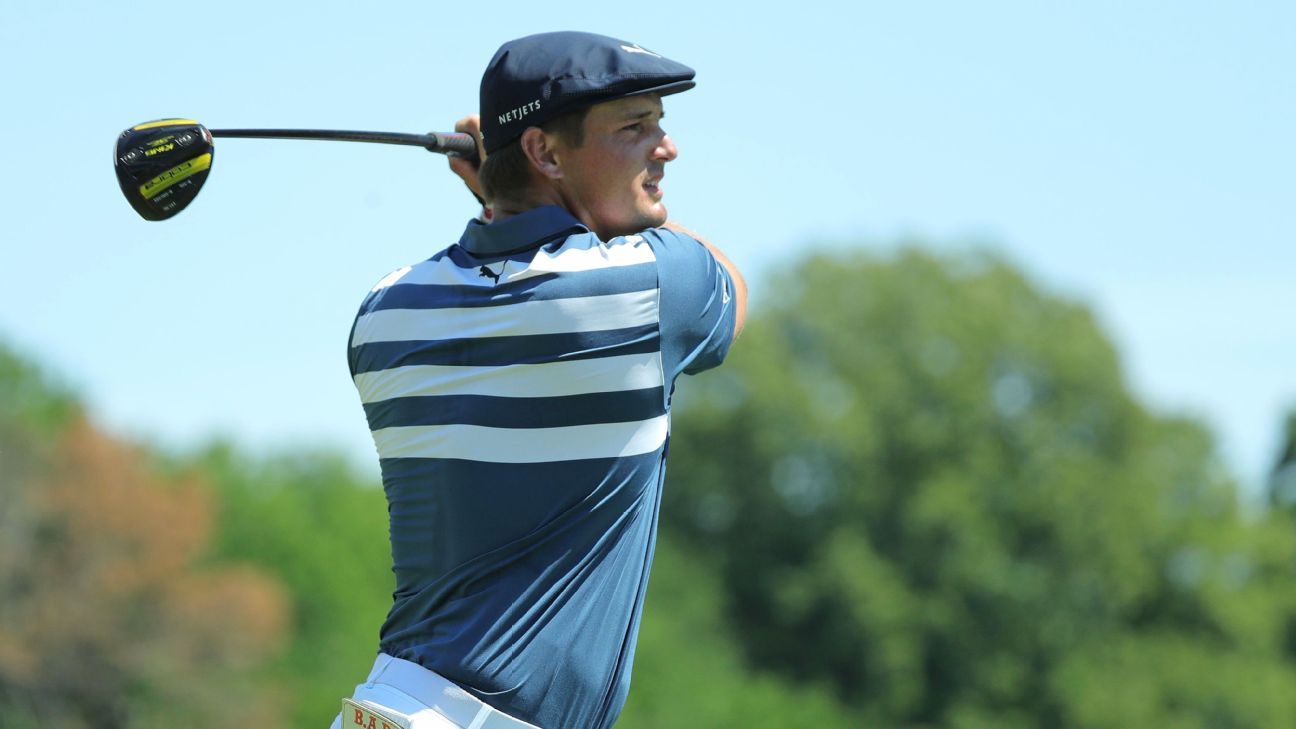 DETROIT — After six top-10 finishes in a row, Bryson DeChambeau has found the winning formula.

After all the experiments, tinkering with equipment, angles, math, bulking up and adding distance, DeChambeau put everything together and won the Rocket Mortgage Classic in Detroit. He did it while many on the outside questioned if his strategy made any sense, if it was sustainable and if it would ever pay off.

Since he joined the PGA Tour, DeChambeau has been known as someone who takes a methodical, analytical approach to his golf swing and career. He factors in math and science more than feel and touch.

He has never been traditional with his one-length irons and uncomfortable-looking swing. DeChambeau has gone down his own path confident he was slowly building the right formula for what it would take to win consistently. He already had five PGA Tour wins entering this season, but he wanted consistency and wanted to build himself into a machine that could get him to where he thinks he can go.

Most recently, he used the time off from the tour, a three-month layoff forced by the coronavirus pandemic, to tinker with the formula, deciding to put on 20 pounds to add mass and speed for more distance. He averaged 340.4 yards off the tee at the Charles Schwab Challenge and showed off what he had been working on in his laboratory.

“He’s changed the way the game is played entirely,” Kevin Kisner said to CBS after the Rocket Mortgage Classic.

Each week — his weight gain is now at 40 pounds — the farther DeChambeau hit the ball, the more heads started to turn.

As is the case with anything new or different from the norm, though, skepticism was still rampant. Finishing in the top 10 week after week is impressive, but it’s not winning.

Despite going 46 under par in his first three tournaments, without a win, credit would not be given to DeChambeau. The added muscle was all for show if it didn’t get him on top of the leaderboard.

He even showed disappointment, saying he hadn’t found his “A-game,” that he was still searching for that peak that he knew was inside him. It wasn’t self-doubt; it was outwardly expressing that he knew everyone was watching and judging and that he too expected more out of himself.

He knew if it didn’t work, the criticism would be aplenty. But he also knew he put in all this work and it would eventually pay off. Using a metaphor comparing himself as a casino, saying the house always wins, DeChambeau repeatedly said he just needed to keep going and keep pushing forward.

The house always wins, and he knew it was coming.

“It’s a lot of momentum for the majors. I feel like it’s a good test run for me hitting drives in tight areas. Number seven wasn’t easy this week and I hit great drives there all week, DeChambeau said after the Rocket Mortgage Classic. “18, I had been doing a great job when I had to. Absolutely had to. If I hit it in the water or a little left or a little right I’m struggling to make par, but I was able to give myself a nice little wedge shot in there.

“It gives me a little confidence moving forward that I know I’m headed in the right direction with my driving and my game. “

He is yet to get to the majors this season — the first one is a month away at the PGA Championship — but DeChambeau is already reaping dividends from his investment.

He’s not just hitting it far off the tee, he’s scoring and has been in the hunt in every tournament since the return of golf in June. His driver is going a mile, but having more distance in his irons is where it’s going to pay off in the long run.

Hitting a 9-iron, a high-percentage club, from 190 yards out is not an option for most players. It is for DeChambeau, and he’s using it to his advantage.

The majority of what he has done in his career is not an option for most players, though, and he’s sticking to who he is. Playing through the criticism from other players, media and fans, DeChambeau hasn’t backed off his formula.

“Yeah, there’s no secret that hitting the ball far is a huge advantage,” Viktor Hovland said. “Now, you’ve got to hit it straight as well to gain all that shots like has been gaining to the field. I think, you know, you can look at him and say, ‘Oh, that’s crazy, I would never do that.’ But the fact is that it works.”

While so many on the outside were questioning when or if a win would happen, he kept trying to improve. After the first round of the Rocket Mortgage Classic, DeChambeau said he wasn’t comfortable off the tee with his driver and it was something he needed to improve.

After the third round, DeChambeau said he felt he was getting better and better every day with the driver. Not coincidentally, as he was getting more comfortable, he also was getting closer to the top of the leaderboard.

He acknowledges there’s still work to do — now that he has the power and distance he does, he needs to improve his wedge play. Having shorter distances to the green means he is hitting different shots that weren’t in his repertoire prior to his body makeover.

He’s confident that will come with time, too.

He’s going to continue to play as the house, not let the outside distractions get into his head and keep putting in the work. His victory at the Rocket Mortgage Classic is already showing his efforts are anything but an experiment.

He made a calculated attempt to gain an advantage over the competition. Now, he has that advantage sitting in his bag.

He’s bombing it off the tee, but he’s also getting the ball in the hole and scoring. If he continues to tinker and gets more and more comfortable each week, he’ll have confidence his long-term investment will pay off in the majors.

But just like a casino, DeChambeau doesn’t look past the bets made that day. For now, he’s focused on what’s in front of him, rather than the majors and what lies ahead.

“I’m not even worried about that,” DeChambeau said. “That’s one of those things that when everything lines up and comes into play, that’ll take care of itself.”