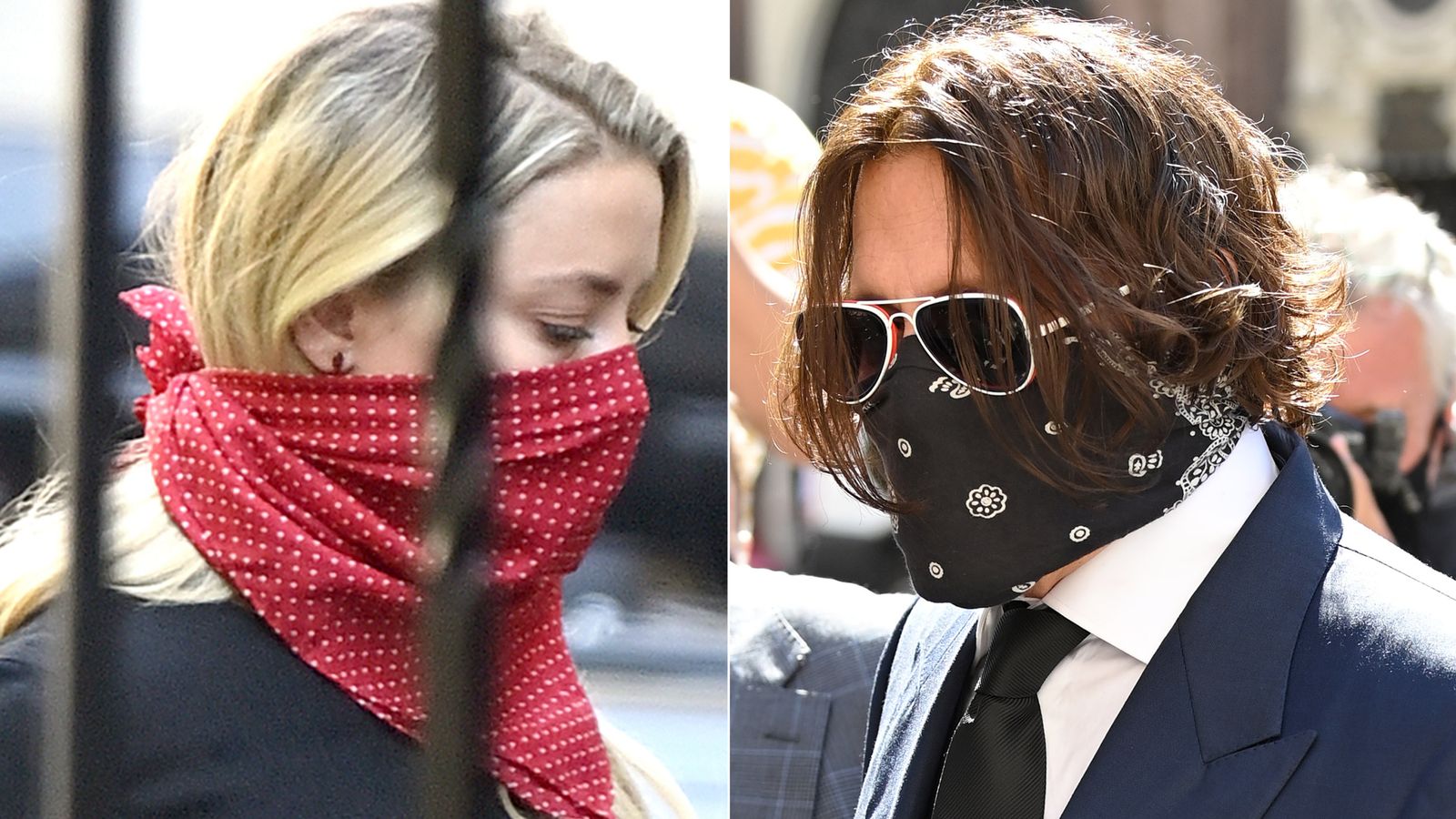 Johnny Depp is not a “wife beater” and allegations of violence made by his ex-wife Amber Heard are “complete lies”, the High Court has been told by his lawyers on the first day of a libel trial.

The Hollywood star is suing The Sun’s publisher, News Group Newspapers (NGN), and its executive editor, Dan Wootton, over an article published in April 2018 which referred to “overwhelming evidence” that he attacked Heard during their relationship – claims which he has strenuously denied.

Both he and Heard are at London’s High Court today, having arrived through separate entrances wearing scarves as face masks.

Depp‘s legal team has said it is “not a case about money” but about “vindication”, with the star wanting to “clear his reputation” following the claims.

They have also argued that Heard, 34, has “invented these stories of serious violence” and that she was the “abuser” in the relationship.

However, lawyers for News Group Newspapers have told the court that The Sun’s description of Depp was “entirely accurate and truthful”.

Appearing as the first witness, Depp was asked about the allegations of abuse, and also about his drug-taking and relationships with famous figures such as writer Hunter S Thompson, musicians Keith Richards and Marilyn Manson, and fellow actor Paul Bettany.

In a written outline of the actor’s case, his barrister, David Sherborne, said The Sun’s article amounted to a “full-scale attack” on Depp as a “wife beater” with “defamatory allegations of the utmost seriousness”.

Mr Sherborne said: “The author deploys a panoply of cultural and topical references – namely the #MeToo movement, the Time’s Up movement and the disgraced film mogul and serial abuser of women Harvey Weinstein – in order to convey the seriousness of what the claimant is alleged to have done.

“They are allegations which the claimant absolutely denies, and which, at the time of publication, he had already publicly denied.”

“The claimant was not violent towards Ms Heard, it was she who was violent to him.”

The main allegations of domestic violence the case is centred on were summarised by Mr Sherborne.

“He (Depp) is not and never has been a wife beater,” he said.

“Indeed, he says that it was Ms Heard who was the one who started physical fights, who punched or hit him (and there was little he could really do to stop this); she was the abuser, not him.”

The barrister said that evidence will be presented to the court which supports this claim.

Speaking about The Sun’s article, written by Mr Wootton, he said it “repeated Ms Heard’s allegations, referring to what he described as ‘overwhelming evidence’ in her favour, in an obvious attempt to confirm categorically in the readers’ minds, several million readers’ minds, that these appalling and serious allegations of criminality were true”.

Later in the trial, the court is expected to hear evidence by video-link from actresses Vanessa Paradis and Winona Ryder, former partners of Depp who both say he was never violent towards them, as well as Ms Heard’s friends, who claim they witnessed abuse by the star.

Mr Sherborne said the “starkly contrasting nature of the evidence” given by Depp and Heard is “one of the defining features of this case” and that there is “no real room for a middle ground here”.

He continued: “One side is plainly lying, and to an extraordinary extent.

“Either Ms Heard’s allegations are true, in all their various forms now, and therefore Mr Depp has chosen to launch and pursue a lengthy libel claim despite knowing that the article which forms the subject matter of the claim is completely true.

“Or, as we say, Ms Heard has concocted them, embellishing and adding to them over the years… which means that Mr Depp is right in seeking vindication before this court from a hugely influential newspaper that sought to act as judge (and jury) by endorsing and convicting him in relation to Ms Heard’s allegations, not to mention demanding an end to his career as the punishment he supposedly deserved.

“You might be forgiven for wondering why would Mr Depp put himself through all of this process otherwise, ie if he were in fact guilty.

“That is the determination for this court. Mr Depp is either guilty of being a wife beater for having assaulted his ex-wife on numerous occasions, causing the most appalling injuries, or he has been very seriously and wrongly accused.”

The actor was asked by his barrister about a conversation between him and Heard in September 2015, which was recorded.

Heard then went on to say “you are a f****** baby”, to which Depp said: “Because you start physical fights.”

The star said he “wanted to avoid another confrontation”, adding: “As was my practice in these situations, whenever it would escalate I would try to go to my own corner as it were… before things got out of hand.”

During cross-examination by The Sun’s lawyer, Sasha Wass, Depp was asked about his drug use and admitted taking marijuana, cocaine, LSD, ecstasy, magic mushrooms and prescription pharmaceuticals over the years.

He said his drug use began when he was just 11, “the only way that I found to numb the pain” due to an unstable home life.

Speaking about his celebrity associations, Depp described Rolling Stones star Richards as his “favourite guitarist” and said both Thompson and Manson were “wonderful friends”.

He said he had taken drugs with Manson “twice maybe, many years ago” and not during his relationship with Ms Heard.

Ms Wass replied: “Mr Depp, you are lying about that.”

Asked whether Bettany was one of his “drug buddies”, the star replied: “Paul Bettany is an actor that I’ve worked with several times, he is a friend and we have… yes, we have dabbled in drugs together.”

He then listed cocaine, alcohol, Xanax and Adderall as some of the drugs they had taken together.

Ms Wass also questioned whether Depp had an anger management problem, referencing an arrest for assault in 1989 and a later incident in which he damaged a New York hotel room.

“I was angry, but that doesn’t mean I have an anger problem,” Depp said.