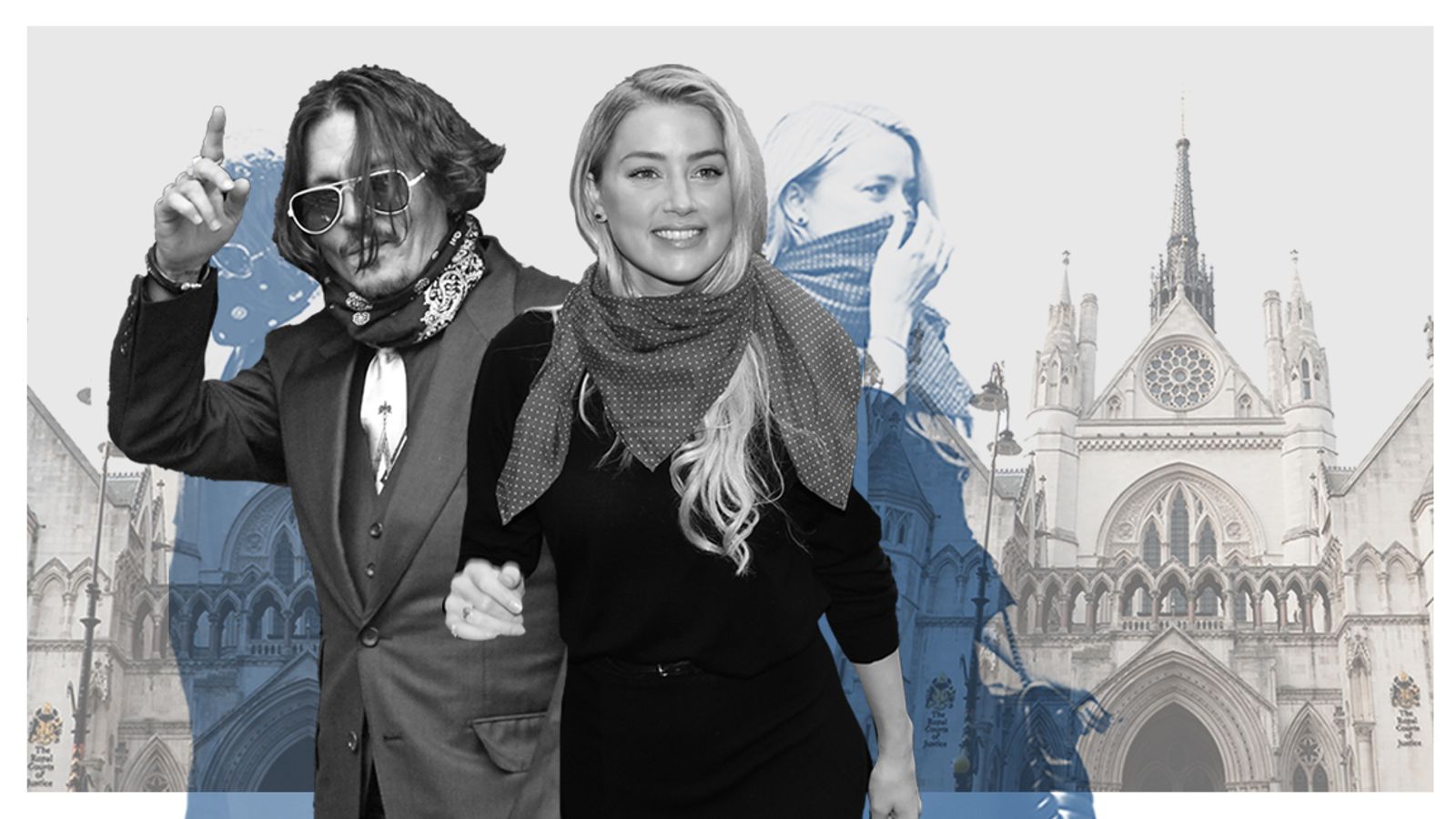 Claims of defecating in bed, accusations of dangling a dog out of a moving car, writing on a mirror in blood and tales of drug and alcohol abuse – after an extraordinary week at the High Court in London the world has seemingly heard every single detail of the now not-so private lives of Johnny Depp and his ex-wife Amber Heard.

The Hollywood actor is suing NGN, the publishers of The Sun, over an article published in 2018 referring to him as a “wife beater”, due to claims of domestic abuse made by Heard following their break-up.

Depp, 57, strenuously denies the allegations, claiming Heard – who is set to give evidence later in the three-week hearing – made them up as part of a “hoax” and that it was she who abused him. The Sun is defending its article as true.

Here are some of the extraordinary details the court has heard during the Pirates Of The Caribbean and Edward Scissorhands star’s time on the witness stand.

Depp painted on a mirror using blood from his sliced finger

One of 14 alleged incidents of domestic violence NGN is relying on in its defence against the actor’s libel claim is what Heard claims was a “three-day ordeal” in Australia in 2015, when the former couple were staying in a rented house while Depp was filming a Pirates Of The Caribbean film.

During that time, the actor’s finger was seriously injured, the tip sliced off – with the injury occurring, he says, when Heard threw a bottle at him.

At the third day of the hearing, Depp admitted to using his bloody finger to scrawl on a mirror in the house, and then dipping it in paint to continue.

The actor said when he realised the top of his finger was missing “and pouring blood profusely and the bone was sticking out, I believe that I went into some kind of breakdown”.

He has “vehemently denied” assaulting Heard, 34, and “completely destroying” the home in Australia – smashing things including a window and the TV – in a drink and drug-fuelled rage.

During the first day of the trial, Depp told how he realised his marriage was over when he found faeces in his bed.

He alleges it was Heard “or possibly one of her friends” and that the actress described it as “just a harmless prank”.

The actor says it was this that made him “resolve to divorce” Heard. The court has heard he called her “Amber Turd” after the alleged incident.

The alleged defecating took place in April 2016, after Heard says Depp arrived late to her birthday party at their LA home, “drunk and high on drugs”.

She claims he threw a bottle of champagne at her and shoved her to the floor several times before leaving a note reading: “Happy F****** Birthday.” However, Depp claims Heard had been “drinking heavily” and attacked him while he was reading in bed.

The next day, the actress or one of her friends “defecated in Mr Depp’s and Ms Heard’s bed”, the court was told.

Under cross-examination by The Sun’s lawyer, Sasha Wass QC, Depp has acknowledged heavy drug use over the years, including marijuana, cocaine, LSD, ecstasy, magic mushrooms and prescription pharmaceuticals.

He told the court his drug use began when he was 11, “the only way to numb the pain” due to growing up with “not a particularly stable or secure or safe home life”.

The 14 alleged incidents of domestic violence include numerous claims of excessive drinking and drug-taking.

One of these is said to have taken place in the US in June 2013, when the pair were with a group of people including Heard’s sister Whitney and Depp’s assistant Nathan Holmes.

Heard says Depp was “taking drugs” and became “enraged” and “jealous” when one of her friends touched her. Depp admits he drank and took magic mushrooms, but claims Heard and her friends did too – as well as ecstasy.

During the alleged incident in Australia in 2015, Heard says Depp stayed up all night taking pills and drinking.

The court also heard how Depp had spoken about actors often being required to take drug tests while filming, but it was put to him that he had once said that “those tests are easy to fake”.

The actor denied saying that, adding: “They are not easy to fake. I never faked a drug test.”

Depp allegedly held Heard’s dog out of a car window

Depp was travelling in a car with Heard and her Yorkshire terrier Pistol, as well as her sister, his assistant Holmes and a driver when he allegedly dangled the dog out the window.

“When you were in the car, you were smoking and you opened the window and you were angry and you were aggressive,” Ms Wass put it to Depp, who replied saying he was “not in that mode at all”.

He was then accused of holding Pistol out the car and “making howling noises”.

Depp described this claim as an “absolute utter falsity” and “fraudulent”, and said: “I don’t think hanging an animal, a small defenceless dog that weighs three pounds, out of a window is fun.”

The actor was also asked if he had laughed at a suggestion of putting the pet in a microwave – he responded saying that it was a “running joke” between himself, Heard and others.

“I wouldn’t say that I was the inventor of that particular joke and also I wasn’t the only one who brought anything like that up,” he told the court.

He has also admitted to the dog once getting “hold of a little ball of hashish”.

Depp has been questioned about his friendships with Hollywood stars and big-name musicians, as well as alleged jealousy over some of Heard’s co-stars.

During the first day of the trial a string of celebrities were brought up, including the Rolling Stones’ Keith Richards, Marilyn Manson and the late author and journalist Hunter S Thompson, who wrote Fear And Loathing In Las Vegas – which was adapted into the 1998 film, which Depp starred in.

“I believe Mr Thompson has a very famous quote that says ‘I do not condone the use of drugs or alcohol to anyone, but they’ve always worked for me’,” Depp said at one point.

Depp said he had taken drugs with Manson “twice maybe, many years ago”, and also spoke about taking drugs with actor Paul Bettany. The court has also heard about text messages between Depp and Bettany, in which Heard was referred to as a “witch” and Depp said: “Let’s burn Amber.”

Two of Heard’s film co-stars, James Franco and Billy Bob Thornton, have also been discussed in court, with Depp being questioned about alleged jealousy.

Depp denies attacking Heard on a flight from Boston in May 2014, saying claims that he shouted at her about “getting f***** on set” by Franco were “quite a stretch of her imagination”.

Depp has also been accused of being jealous of Thornton, who starred with Heard in the film London Fields.

Photos of Heard’s injuries and wrecked rooms shown in court

Pictures of Heard with bruises, allegedly caused by Depp, have been shown to the court.

In one incident, during an alleged fight at their LA penthouse in December 2015, it is claimed Depp trashed Heard’s wardrobe, threw a decanter at her, slapped her, pulled her by the hair and headbutted her, causing two black eyes.

The Sun’s lawyer told the court the actor was “in an uncontrollable rage” and “screaming you were going to kill her”.

However, Depp claims it was Heard who was aggressive and that he only tried to restrain her. He conceded he might have headbutted her, but only by accident, and denied causing her injuries.

With the hearing set to last three weeks, the court is due to hear evidence from numerous associates of both Depp and Heard, as well as the stars themselves.

Included in the list of witnesses are Winona Ryder and Vanessa Paradis, both former partners of Depp who are set to appear by video-link.

French star Paradis, a singer and actress, is the mother of his two children. The court has heard how Depp referred to her as the “French ex albatross” in a text message sent after he first started dating Heard.

Asked in court if he considered that a reasonable way of describing the mother of his children, Depp admitted it was “disrespectful and disgusting”.

Depp famously had the words “Winona Forever” inked during his relationship with Ryder, who he starred with in Edward Scissorhands. After their break-up, he changed the tattoo to “Wino Forever”.

The court has been told how Heard allegedly laughed at the tattoo, but Depp says he does not recall any conversation about it and has denied getting violent over her mocking him.

In witness statements, both Paradis and Ryder both say the actor was never violent towards them.

Heard’s friends, also set to give evidence, say they were present when Depp was abusive.

Heard was allegedly compiling a ‘dossier’ against Depp

The actor has claimed several times throughout the hearing so far that his ex-wife was “building a dossier” from early in their relationship as an “insurance policy for later”.

His theory for Heard’s allegations is that they are a “hoax”, the court has been told.

The actor’s case against NGN and The Sun’s executive editor Dan Wootton is over the publication of an article on The Sun’s website in April 2018, which ran with the headline: “Gone Potty: How can JK Rowling be ‘genuinely happy’ casting wife beater Johnny Depp in the new Fantastic Beasts film?”

NGN says Depp was “controlling and verbally and physically abusive towards Heard, particularly when he was under the influence of alcohol and/or drugs”.

Depp’s barrister David Sherborne has described Heard’s allegations as “complete lies” and says the article made “defamatory allegations of the utmost seriousness”, amounting to a “full-scale attack”.

A separate libel claim brought by Depp against Heard in the US, over a column in the Washington Post published in December 2018 – which said the actress received “the full force of our culture’s wrath for women who speak out”, but did not mention the actor by name – is due to begin in January.

The libel action in the UK continues on Monday.