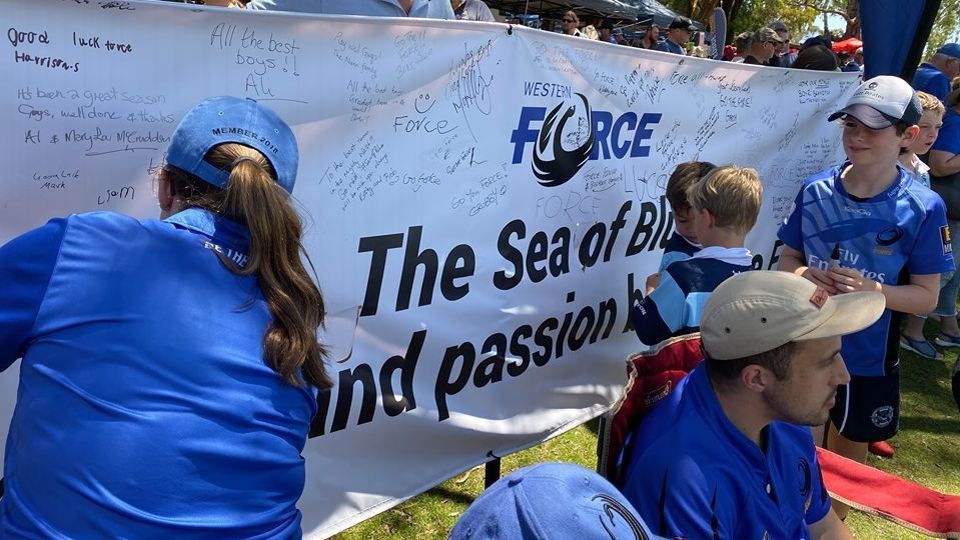 They’re three words associated with rugby clubs all over Australia, particularly when you consider the shambolic nature of how the game has been run in recent years.

With the game slowly starting to emerge from the hiatus caused by the COVID-19 pandemic, and Super Rugby AU kicking off last weekend, there are some positive signs at last for supporters to cling onto.

But there is one group of fans for whom the fixture between the Waratahs and Western Force at Sydney Cricket Ground on Saturday night will be particularly special; the match will be a celebration of the passion, determination and community they have driven just a few years after they had every right to walk away from rugby altogether.

“I didn’t think about it [Force’s return] too much over the last few weeks because you didn’t want it to fall through,” Karen Hennessy, creator of the Sea of Blue Facebook group, told ESPN. “And then over the last couple of days I really started to think about it, and when we watched the two matches at the weekend I thought ‘we might be in with a good chance here’.

“So for them to be back in Super Rugby, just back playing as a nation, all the five teams together, is just amazing.”

The story of the Force’s demise is well known.

Following a horrendous expansion of Super Rugby in 2016, when the competition swelled to 18 teams and introduced a conference system that had little integrity, the then Australian Rugby Union agreed to cut a team after the 2017 season.

Having already called on the national body for a loan to survive, the Force was deemed surplus to requirements despite similar concerns around Melbourne Rebels’ financial stability.

Images of Matt Hodgson, the tireless former Force skipper, in tears at the team’s looming exit towards the end of 2017 Super Rugby season, stung rugby fans right across Australia.

But they also motivated a small group of Force supporters to do something. Knowing how important it was to keep the game alive at grassroots level, and to retain at least some connection with the team around Perth, Hennessy and her fellow Force diehards went to work.

“When we got cut, it was such a shock for everybody and nobody could quite believe that this happened,” Hennessy explained. “So myself and an Irish guy, Shane O’Neill, and a couple of other people organised the Save the Force rally, and I set up the Sea of Blue Facebook group and Save the Force Facebook page, and that was all done at that time.

“And then after we got cut, it was a way of keeping people together; people were feeling so lost and disgusted and couldn’t believe that this had happened and they wanted to vent, and the social media side of it went from there.

“And then what myself and another lady and I did, Alison Foskett… all of a sudden I got dragged into this, just a face in the crowd into a realm of a hardcore fan and I was like ‘What the f—?! So Alison and I met and we got together through that whole period, and through our pain, we formed a really strong friendship and started organising events.

“When the Force was cut, we had nothing, we had no professional team. There were rugby fans who had their club rugby and then there were Force fans who had no rugby to watch. So we organised what we called was a ‘Rolling Sea of Blue’ where a group of Western Force fans would go around club rugby games with banners that said Sea of Blue, so still trying to keep that grassroots connection there; and that all happened in the midst of not having the Western Force.”

While the Force were banished from Super Rugby, the whole episode eventually costing former ARU chief Bill Pulver his job, billionaire mining magnate Andrew ‘Twiggy’ Forrest quickly stepped in and set about ensuring the franchise had a future.

Forrest set up a Global Rapid Rugby exhibition series in 2018 before a proper competition, featuring teams from Asia and the Pacific, was played in 2019; one match of this year’s tournament had been played before the onset of the coronavirus pandemic.

He also recently donated $5 million to grassroots rugby in Western Australia just a few weeks ago.

“I’ve met Twiggy a couple of times, at a couple of announcements, before myself and another girl were invited to the Bledisloe game [in Perth last year] as their guests to say ‘thank you for all the behind-the-scenes work that you do’,” Hennessy said.

“But with Matt Hodgson and the Western Force side of things, what I’ve done over the last few years is I’ve repeatedly looked at their fan engagement and how they relate to the Sea of Blue; post-game supporter analysis and what worked well with the fans. So I’ve kept up that connection the whole way through, and we’ve looked at having official supporter clubs and stuff like that.

“So I have a really good relationship with them — and Alison does, too; she’s been setting up some fan hubs to watch the [Super Rugby AU] games at Palmyra Rugby Club and then a couple of the bars, too. So they’ve been so welcoming and continued to reach out the whole time, keeping that connection with the Sea of Blue and the fans.”

While the Force haven’t been connected to the rest of the country on a Super Rugby level, the state has still managed to provide both the Under 20s and Wallaroos with players at international level. Michael McDonald, a member of last year’s Junior World Championship runners-up, is Perth born and raised and will, ironically, line up for the Waratahs against the Force on Saturday night having headed east.

Hennessy says that is a result of the hard work, commitment and drive of those involved at Rugby WA and the local rugby community.

“I think what it comes down to is the strength and determination of the volunteers at club level, all clubs and grassroots rugby,” she told ESPN. “I think that’s where the sport is still so alive; the passion of those coaches and parents to get the kids through.

“Then I suppose when you look at the work that Rugby WA and CEO Bob Hunter have done over the last few years in keeping that alive, standing up to battles with Rugby AU to get funding and stuff like that. But the Future Force Academy, if you look at that — I think that’s funded by Rugby AU and the Future Force foundation over here, that’s so important to keep the young lads and now young women going through the pathways, it’s just so important.”

Despite a thawing of tensions, Hennessy says Force fans have not totally forgiven Rugby Australia for its decision to axe the team in 2017.

A quick look at the Sea of Blue Facebook page and the sense of excitement ahead of their return is clear. There’s a few people who think the $4.25 odds for the Force to beat the Waratahs is overs, too.

Having played just the one game earlier in the year, and with some new faces joining the squad when their involvement in Super Rugby AU was confirmed, the Force are certainly facing a tough challenge, at least while they find their feet in the opening few weeks of the competition.

They have also been away from home for more than a fortnight, having relocated to the Hunter Valley in New South Wales in the midst of the COVID-19 pandemic.

Win, lose or draw, the supporter base can bask in their return to the national stage; Hennessy, and her fellow Sea of Blue tragics, proud of their sheer determination to keep the team relevant.

“No, I never thought it was too hard, because people were feeling the same way you were feeling,” Hennessy said of the past few years’ work. “So it was like a sounding board really, if you look at the group and how many people are on there and how many people respond to posts; there’s a lot more people listening than you might think and you get a lot more personal messages from people saying nice things.

“It was never too much.”