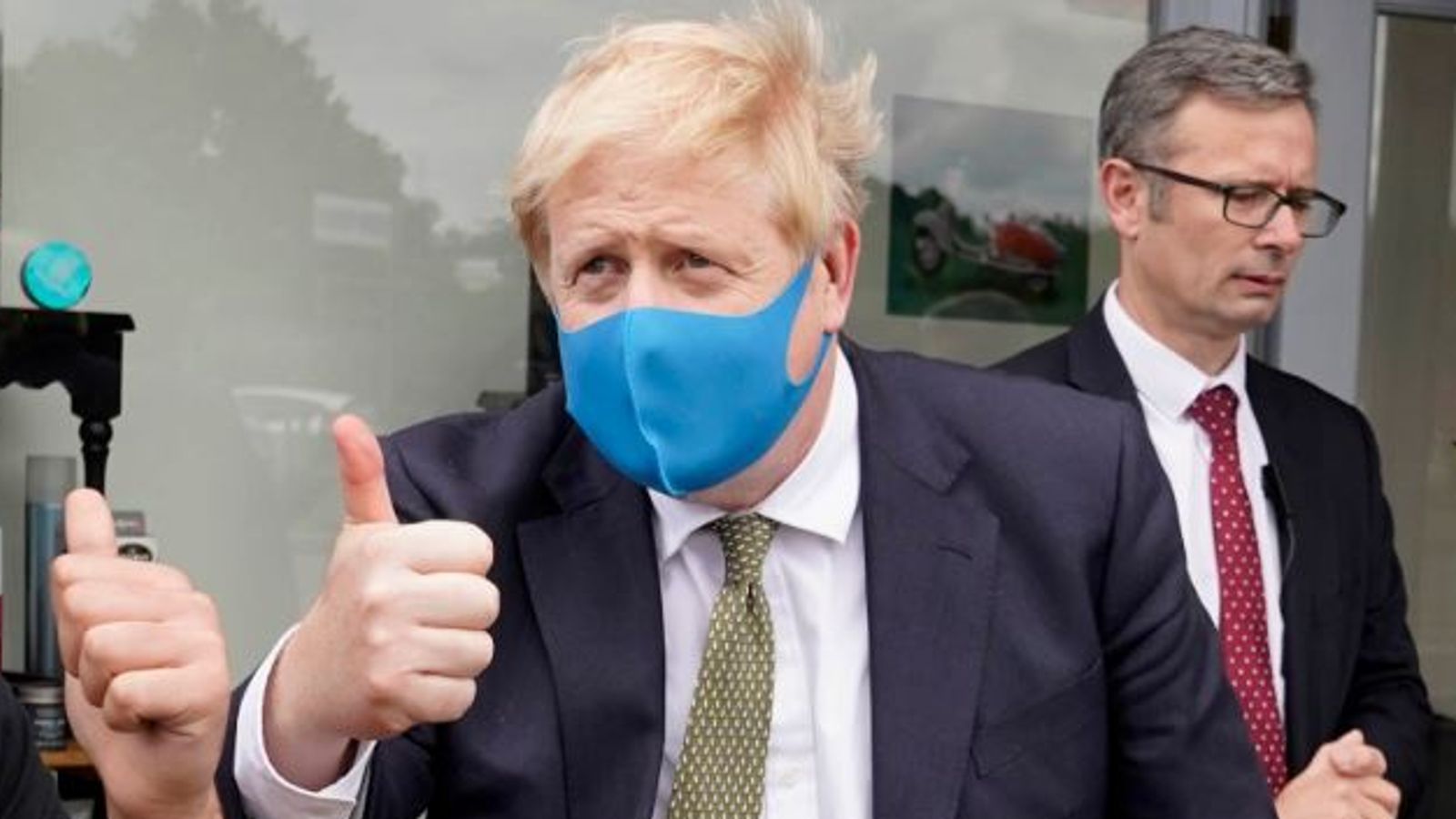 Boris Johnson has served notice that tougher rules on wearing face masks could be on the way, as he appealed to people working from home to go back to work.

In a significant shift in COVID-19 policy, the prime minister said the government now needs to be stricter on insisting people wear masks in confined spaces such as shops.

Mr Johnson was himself seen wearing a covering – a bright blue number – for the first time on Friday, while he visited shops and takeaways in his constituency of Uxbridge.

He also said he wants people to now go back to work if they can, to try to lead their lives more normally and feel confident to use shops and restaurants, while following official guidance.

The prime minister’s apparent double U-turn came as he answered questions from members of the public in a pre-recorded online “People’s PMQs” from 10 Downing Street, lasting 40 minutes.

His comments on face masks came in response to a question about a World Health Organisation warning on coronavirus transmission and whether they should be mandatory in all places outside homes.

“We are looking at ways of making sure that people really do have face coverings in shops, for instance, where there is a risk of transmission.”

The prime minister said expert opinion on face coverings had shifted over the course of the coronavirus pandemic.

“The balance of scientific opinion seems to have shifted more in favour of them than it was,” he said.

“We are very keen to follow that. I do want to get back to a world where the British people are able to shake hands – that’s what we are aiming for.

“But face coverings, we increasingly think that we have got to be very insistent in confined spaces, where you are meeting people you don’t normally come into contact with – transport, shops – wear a face cover.”

Urging people to return to work, Mr Johnson said: “I want people to go back to work as carefully as possible.

“Because I think it’s very important that people should try to lead their lives more normally. I want to see more people feeling confident to use the shops, use the restaurants, and get back into work – but only if we all follow the guidance.”

The prime minister’s remarks came after his official spokesman faced questions about why more cabinet ministers are not wearing face coverings.

Fresh data from the Office for National Statistics suggests 52% of adults in Britain wore a face covering when leaving their home in the final week of June, up from 43% the week before.

And 58% of the 1,788 adults quizzed between 2-5 July said they were very or fairly likely to wear one in the next seven days.

Before Friday, there had been no public sighting of Mr Johnson wearing a face covering.

But he tweeted several photos showing himself sporting a blue covering while visiting several businesses in Uxbridge, which he said were “working hard to make themselves COVID-19 secure”.

It was great to visit some local businesses in Uxbridge today, and see how they’ve been working hard to make their premises COVID-19 Secure.

If you’re out this weekend be sure to follow the guidelines on social distancing. #StayAlert pic.twitter.com/54eCyvOa9D

However, earlier this week Chancellor Rishi Sunak was pictured serving food to customers at a Wagamama restaurant in central London without a mask, as he urged the public to “eat out to help out”.

Earlier, arts minister Caroline Dinenage said she had taken to wearing a face covering “all the time” and said a lot of her colleagues were doing the same.

“I have a fashion design student as a son who has run me up a few on his sewing machine and I wear them all the time,” she said in a radio interview.

“A lot of us are out there wearing them as we go about our daily lives.”

Health Secretary Matt Hancock has been seen wearing a face covering while visiting a hospital, while Culture Secretary Oliver Dowden also wore one while attending a gallery this week.

In Scotland, First Minister Nicola Sturgeon – who is regularly seen wearing a tartan mask – has made it obligatory for shoppers to cover their face with a covering or similar garment.

And London mayor Sadiq Khan has told the prime minister in a letter that he is “disappointed and frustrated” that the government has not demanded masks be worn in “busy and enclosed public places”.

“Face coverings are not only vital for public health,” said Mr Khan.

“They could play an increasing role in supporting public confidence and our economic recovery.”

Meanwhile outdoor arts performances – including theatre, opera, and music concerts – will be able to resume from this weekend, while the government has published guidance to enable grassroots team sports to return, beginning with cricket.