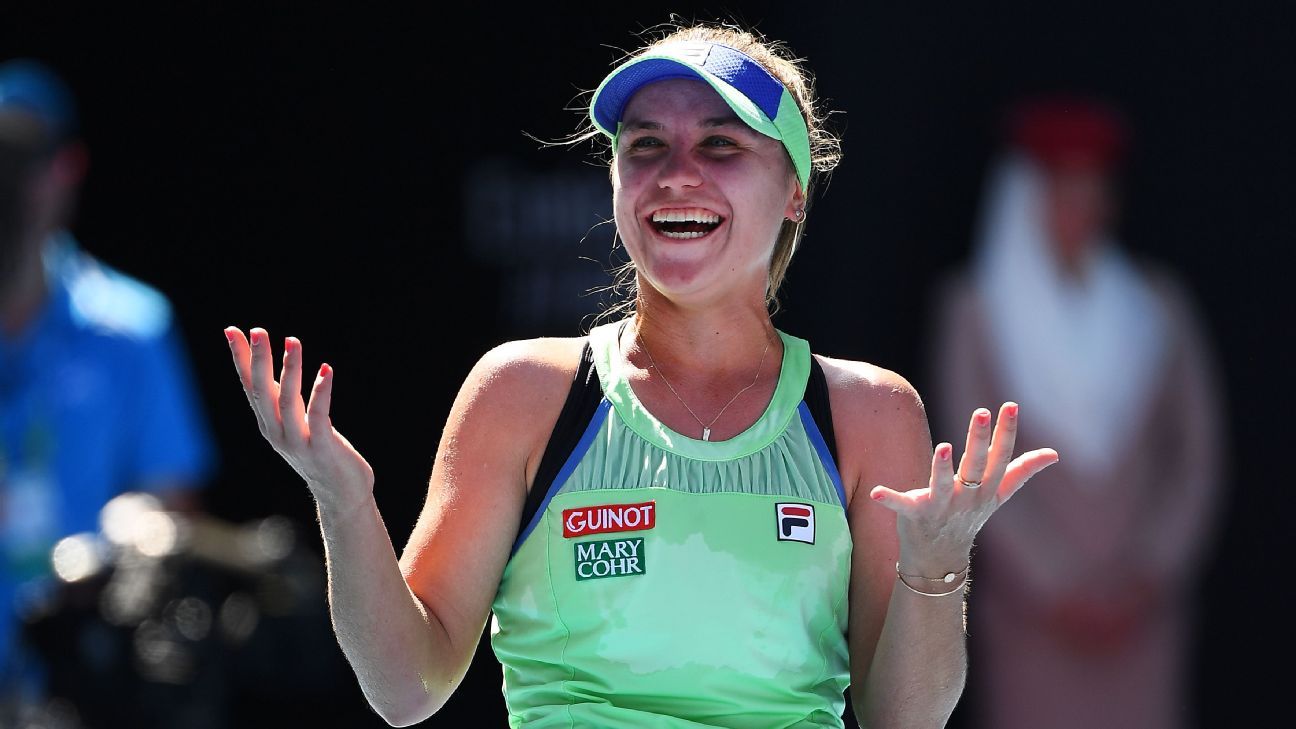 After being at home for several months because of the global coronavirus pandemic, Sofia Kenin was more than eager to return to competition. So when the opportunity arose to play World TeamTennis this summer, she jumped at the chance.

It was only after she agreed to participate that she realized how little she knew about the event or the format with no-advantage scoring and the use of multiple players and configurations in a match. So she did what any 21-year-old would do and headed to YouTube, where she spent hours watching matches from previous seasons.

“I started watching as soon as I knew I was going to go,” Kenin said. “I’ve never played it before, and the format is so different. It looks really fun. All of the other teammates are sitting on the benches, cheering each other on, and it seems like a great team atmosphere, so I’m super excited. I’ve heard nothing but good things about it [from other players], and I’m happy to be a part of it this year.”

The suspension of the tennis season has undoubtedly been challenging for everyone on the WTA and ATP tours, but for Kenin, it couldn’t have come at a more inopportune time. She won her first major title at the Australian Open in February and surpassed Serena Williams as the highest-ranking American in the process. Entering the BNP Paribas Open in Indian Wells, California, she was ranked a career-high No. 4 and had just won her second title of the year in Lyon, France. She was hoping to capitalize on her blistering-hot start to the year with deep runs during the Sunshine Swing and ultimately secure her spot on her first Olympic team.

Instead, she returned home to Florida, where she did her best to stay upbeat and in shape as tournament after tournament was canceled. She knows she has been lucky. She and her family have stayed healthy, and she has been able to train consistently — unlike many of her peers around the world who endured much stricter lockdowns. Kenin also developed a love of cooking during the break.

Still, Kenin admits it has been difficult.

“It was really difficult and not easy coming off after [such success] and then having everything just stop,” she said. “It’s been tough, and obviously seeing everything that’s going on [with the virus] has been so upsetting. I had no motivation during the first weeks following the shutdown, and it was hard to keep practicing when we had no idea what was going to happen or what tournaments were going to happen.

“I just kept telling myself everything is going to get better, and my dad [and coach] tried to keep me focused. When I found out about some of the events that were happening, I started feeling a lot better on the court and was so happy to have competitions to look forward to again.”

Kenin is known for her intense on-court energy and fierce win-at-all-costs persona, so it’s not exactly a surprise she says she has missed competing more than anything else. She was thrilled to be able to participate in last month’s exhibition event in Charleston, South Carolina. The clay-court tournament featured 16 women playing on two teams — Team Peace and Team Kindness — in singles and doubles matches over the course of six days. Kenin helped lead Team Peace and was part of the tournament-clinching match with frequent doubles partner and friend Bethanie Mattek-Sands, who was also the team captain.

The competitors did their best to maintain social distancing protocols throughout. They wore masks when they weren’t on the court, and there were no fans in attendance. As such, the players did their best to make it feel as normal as possible and would all remain in the crowd for each other’s matches. Kenin said teammate Eugenie Bouchard was the most vocal during everyone’s matches, as she could be heard throughout the stadium offering positive cheers.

The team celebrated the victory with a champagne-soaked celebration on the court. Kenin said the experience made her even more enthusiastic about the World TeamTennis season.

During a normal year, WTT matches are held across the country in the respective cities of the participating teams. This year, all of the matches will be played at the Greenbrier Resort in West Virginia. The players will stay at the resort and must be tested before going to the facility, as well as undergoing another test upon arrival. They will be tested again a week later and potentially undergo more testing as needed over the three-week season. Players will be eliminated if they test positive and be asked to self-quarantine. A limited number of fans (about 500 per day, or 20% of capacity) will be allowed to attend. Their temperatures will be taken before they enter the grounds (under 100.4 degrees acceptable).

Kenin will be playing for the Philadelphia Freedoms alongside Taylor Townsend, Caroline Dolehide, Taylor Fritz, Donald Young and Fabrice Martin. Kenin said she already knows all of her teammates and likes their chances to win together.

“I feel like I have even more motivation now because I really haven’t played in four months,” she said. “I know everyone on the team will be so excited just to compete again, and we’re going to do our best to bring our A-games for every match. In tennis, it’s usually you by yourself, so getting to be part of a team is really special. You really feel their support when you’re out there, and it means a lot.”

The season officially gets underway on Sunday, and Kenin and the Freedoms will make their debut on Monday against the Orange County Breakers, with another four matches scheduled in the first week. The regular season ends on July 30, and the final is scheduled for Aug. 2.

Kenin is hopeful her team will ultimately be the last one standing and hoist the King Trophy when it’s all over. But no matter the outcome, she is grateful to have the opportunity to prepare for the restart of the WTA season in a competitive environment.

She remains cautiously optimistic about the two-tournament bubble in New York for the Western & Southern Open and the US Open. She plans to play in both events, as well as the rescheduled French Open in September if travel restrictions allow. She recognizes there is still a chance the schedule will change again because of the lack of containment of the virus, but she is hopeful.

“I definitely want it to happen, but of course we really can’t be sure [if it will] at this point,” Kenin said. “It’s not going to be the same without the fans, but I just really want to play and I really want to compete. I have to be realistic and understand there’s a chance it might not happen, but in order to stay motivated, I have to tell myself it is so I can have that goal.

“But yeah, fingers crossed and just hope things will be good. That’s all I can do at this point.”