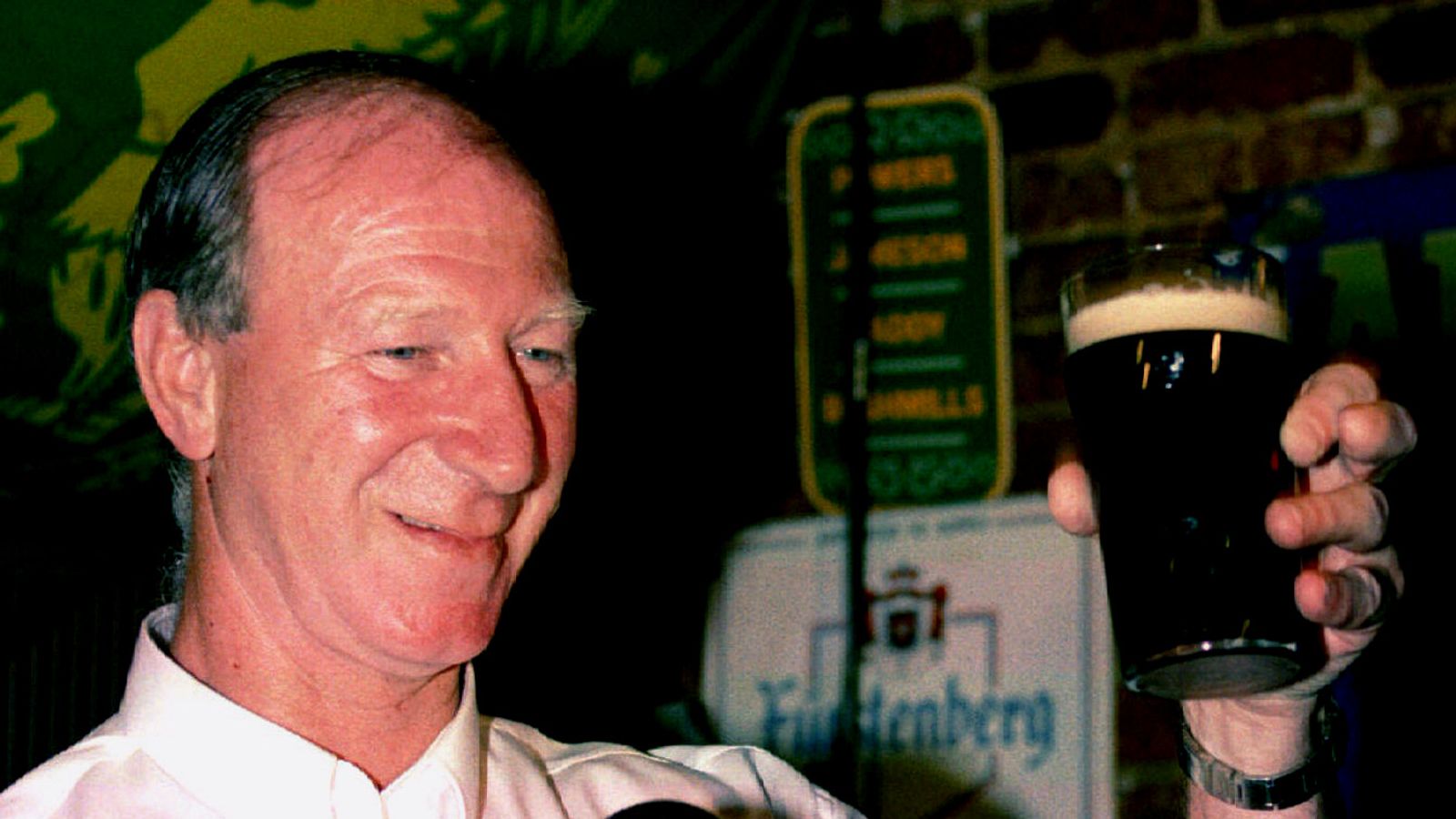 The Football Association of Ireland changed its mast head picture on Twitter to an image of a smiling Charlton, and tweeted videos and pictures of some of the national team’s finest moments under his leadership, saying: “The man who dared us to dream”.

Micheal Martin, the prime minister of Ireland, who Charlton took to the World Cup quarter finals in 1990, said: “So saddened to hear of the passing of Jack Charlton who brought such honesty and joy to the football world.

“He personified a golden era in Irish football – the Italia 90 campaign being one of pure joy for the nation. He gave us magical memories. Thank you Jack.”

Former Liverpool midfielder Ray Houghton, who was handed his Republic debut in Jack Charlton’s first match in charge of the side in 1986, told talkSPORT: “He was a larger than life character. The word legend is used too much in football but not for Jack.”

He said Charlton “changed everything about Irish football”, adding: “His legacy within Ireland is absolutely huge.”

‘The news of the death of Jack Charlton will have been received with great sadness by those of us who took him to our hearts as he brought Ireland to some of our most celebrated moments in Irish sporting history.’ https://t.co/ltKIIOOXTp

Former Ireland defender Paul McGrath, who played under Charlton at Italia 90, tweeted: “Absolutely gutted. Father figure to me for 10 years, thanks for having faith in me. Sleep well Jack. Love ya.”

McGrath’s former Ireland teammate, John Aldridge, added: “Absolutely gutted that BIG JACK has passed away!What a football man,,Loved and adored,specially in Ireland.The best manager I was lucky to play for.The times we had on and off the pitch was priceless !”

The England team’s Twitter page said: “We are devastated by the news that Jack Charlton, a member of our World Cup-winning team of 1966, has passed away.”

Several Premier League clubs also paid tribute, including Leeds United, for which he played for more than two decades.

The club pinned a tweet at the top of its page that said simply, “Rest in peace Jack”, over a video montage of some of his most remarkable feats on the pitch.

We are devastated by the news that Jack Charlton, a member of our World Cup-winning team of 1966, has passed away.

Our deepest sympathies are with Jack’s family, friends and former clubs. pic.twitter.com/eSGjbOpo7Y

Prime Minister Boris Johnson tweeted: “Jack Charlton was a football great whose achievements brought happiness to so many. My sympathies are with his family and friends.”

Beyond sad to have to say goodbye to my beloved Grandad, Jack Charlton. He enriched so many lives through football, friendship and family. He was a kind, funny and thoroughly genuine man and our family will miss him enormously. pic.twitter.com/MR4i5WgAMP

Former England striker Gary Lineker said: “Saddened to hear that Jack Charlton has passed away. World Cup winner with England, manager of probably the best ever Ireland side and a wonderfully infectious personality to boot.”

Emma said: “Beyond sad to have to say goodbye to my beloved Grandad, Jack Charlton. He enriched so many lives through football, friendship and family. He was a kind, funny and thoroughly genuine man and our family will miss him enormously.”

Kate added: “Yesterday was a very sad day. My grandad, Jack Charlton, died peacefully at home.He was kind, playful and genuine, and I’ll miss him so much. Already seen many lovely messages in his honour. I’ll share them with his wife, my grandma Pat, to help her through this difficult time.”

Sky correspondent Enda Brady, who posted a picture of him interviewing the football legend as a youngster, said: “I don’t have the words to describe just how much Jack Charlton meant to Irish people and how much he did for our country. He gave us the best of times. Thanks for giving a 15 year old kid on work experience a break. Much love to your family. RIP Big Jack”