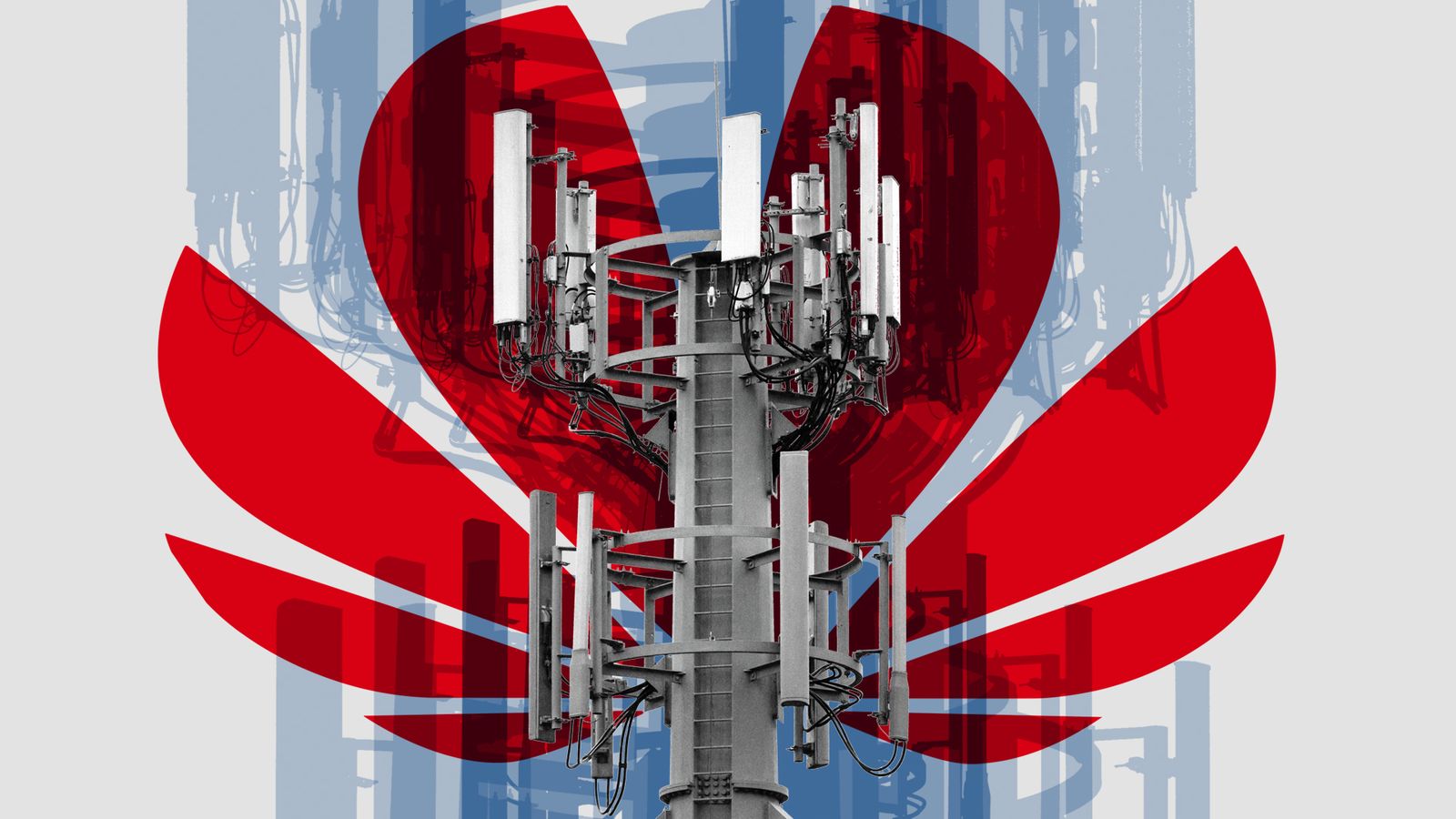 As the government announces that Chinese tech giant Huawei’s equipment will be removed from the UK’s 5G network by 2027, Sky’s experts assess the implications of the decision.

Huawei’s first major customer was China’s People’s Liberation Army. Its latest will not now be the UK – and that will provoke fury.

Beijing’s rhetoric is so reliably and angrily florid on every matter that it can be hard to tell what the Chinese Communist Party really cares about.

It responded apoplectically to the UK’s offer of passports to people in Hong Kong, calling it “gross interference”.

But the UK’s offer had already been anticipated by the Chinese side, according to diplomatic sources.

The public fury was merely routine.

Huawei is different. It is the crown jewel of China’s technological ascent. Its executives are princes in the party.

Had the British government allowed Huawei to stay in the UK’s 5G networks, it would have been a kitemark of approval the company could tout to other countries around the world which have their own security concerns.

And banning Huawei would mean the UK is treating China as a “hostile country”, the Chinese ambassador to the UK has said.

Critics will argue this rather proves their point – that Huawei and the Chinese state are too close for comfort.

Canada crossed Huawei and saw their citizens jailed in China.

The UK should prepare for serious retaliation this time, not just rhetoric.

It’s striking how the tone has changed in a relatively short time.

In January, British intelligence was relaxed with the decision to allow Huawei access to parts of the 5G network. Six months later Huawei is persona non grata.

The US has outwardly altered the landscape by preventing Huawei from using American technology in its chips.

That move has forced Huawei to use untested, untrusted Chinese alternatives and precipitated an intelligence review of the British decision; but it’s also provided Downing Street with a convenient excuse to make this U-turn.

I’m not sure the US/UK intelligence-sharing relationship was ever in great doubt, despite White House threats.

But Britain’s change of heart will ensure the Five Eyes alliance is at one on Huawei, although Canada is yet to formalise its decision.

Frustratingly for Huawei, such is the respect with which British intelligence agencies are regarded, this decision is also likely to influence other countries still considering their 5G policy.

‘Golden era’ of relations with China is over
By Sam Coates, deputy political editor

Today marks a major pivot in British foreign policy, as Britain brings to an end the “golden era” of relations with China.

The previous initiative was inaugurated under David Cameron and continued, somewhat less fulsomely, under Theresa May, and set the UK up for a more profitable trading and investment relationship with China after Brexit.

It is now over – with today’s instruction to rip out Chinese tech company Huawei technology from the 5G network by 2027.

But to listen to ministers, this change – greeted with the promise of consequences from Beijing – is all presented as the consequence of decisions out of their hands.

Today’s decision is not a consequence, for instance, of the new security law governing Hong Kong; China’s behaviour over the coronavirus outbreak; the treatment of the Uighur Muslim minority in Western China; or years of trade infractions.

The move, which has the potential to change Britain’s place in the world, according to ministers is simply a consequence of US sanctions on all American chips being used by Huawei products announced in May, sanctions the UK government presumably regrets.

The British government wanted to do something different – keeping 35% of Huawei in its network just months ago – but it appears Global Britain in this instance means having to choose between superpowers rather than strike out on its own.

Government could face demands for compensation in wake of decision
By Rowland Manthorpe, technology correspondent

This news will come as a big blow to the UK’s four telecommunications networks: O2, Three, EE and Vodafone.

For the last year, they’ve been quietly rolling out 5G across the country – mostly with Huawei kit, which was approved by the government for use in the outer part of the network.

According to tech website Techradar, 5G is available in a total of 249 UK locations, from Aberdeen to York.

Taking the Huawei elements out of that will cost “hundreds of millions”, one telecoms source told me.

The telecoms companies have been given until 2027 to act and it seems as if they’ve been spared the huge additional cost of removing Huawei from the 4G network.

But given that they were only following the rules, this is going to cause real frustration – one reason why respected telecoms experts were suggesting this morning that operators may ask for compensation from the government.

Response from China could include cyber attacks and levies on British imports
By Deborah Haynes, foreign affairs editor

China will not react well to Britain’s rejection of Huawei, but the US will celebrate.

The Chinese ambassador to London has already warned there will be consequences, hinting at a reduction in Chinese investment.

Wanting to limit the damage, the Foreign and Commonwealth Office (FCO) will seek to frame the Huawei move as an isolated issue, forced upon the UK by US sanctions against the Chinese firm.

But there will be no such distinction drawn in Beijing.

It will view the snub as a sign of the UK kowtowing to the will of US President Donald Trump, who has pressured successive British governments to ditch the company.

It will also be seen through the lens of a wider sense of anti-China rhetoric from Britain and other western allies like Australia, New Zealand and Canada.

This includes criticism of China over its initial handling of the coronavirus pandemic, with the Chinese authorities accused of secrecy in the early days of the crisis – a charge they refute.

There are also growing hostilities over Hong Kong, triggered by a new security law passed by Beijing in the face of condemnation from the West.

By contrast, Britain’s decision to turn its back on Huawei will be welcomed by its closest ally – the United States – as well as other parts of the Five Eyes intelligence-sharing alliance of Australia, Canada and New Zealand.

They have largely struck a highly cautious note on the Chinese company, with the US and Australia in particular highly critical of Britain’s dealings with the firm.

The UK could also make it harder for Huawei to expand further into other European networks, with a 5G platform in Britain seen as an important way point to further growth across Europe.

With so much at stake this is a highly turbulent time, making the question of Huawei particularly combustible.