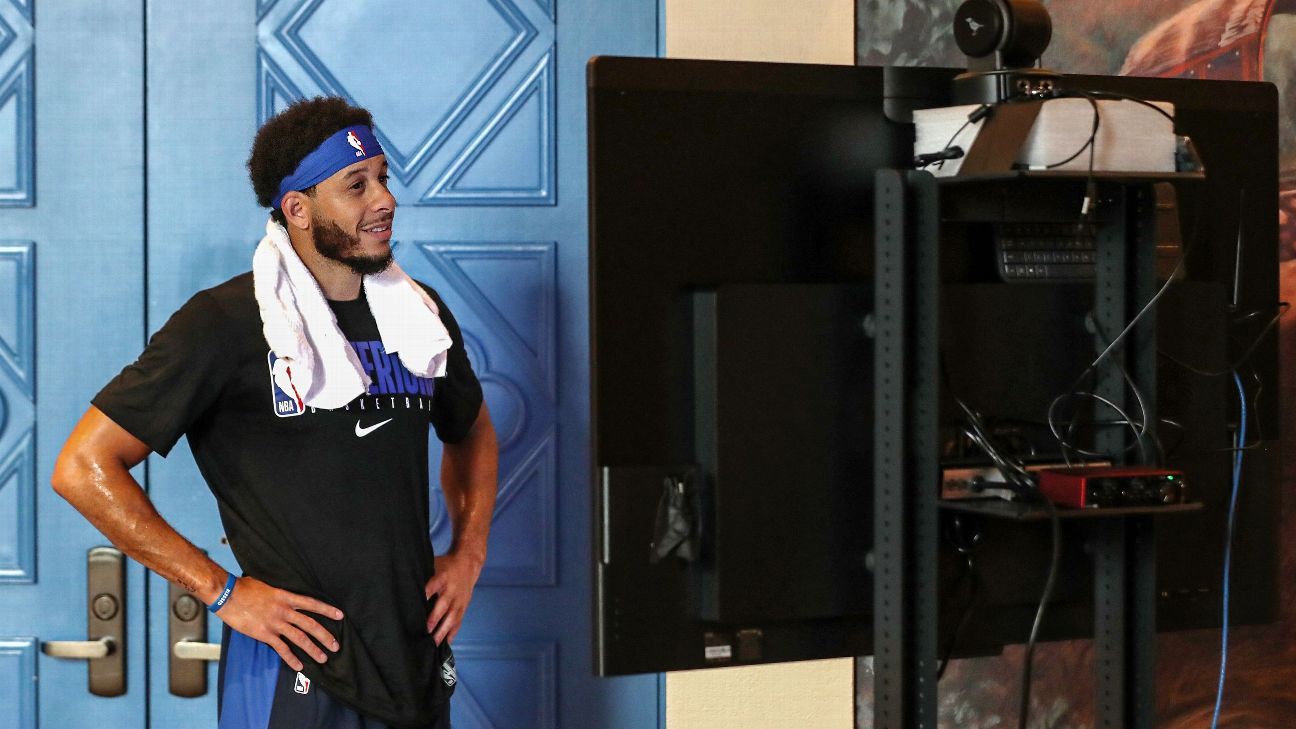 All 22 teams participating in the NBA season restart have arrived at Walt Disney World, cleared the initial quarantine period and begun practicing on courts set up in converted ballrooms. Players have checked into their temporary homes at one of three resort locations and have been introduced to the meal service and amenities they’ll have access to as the NBA attempts to crown a champion in mid-October.

As players and coaches met with the media — virtually — they shared their early impressions of the NBA’s setup in Central Florida.

Donovan Mitchell, Jazz guard: “Honestly, to me, it’s like AAU really — except for the quarantine part. But, it’s been like AAU. I’ve just been relaxing, studying film and just making sure I can try to eat as well as I possibly can as far as nutrition because there’s temptation to have snacks for sure.”

Joe Ingles, Jazz guard: “The first 48 hours sucked. I don’t know if you’ve ever been locked in a room with no window before. I can’t open my window. I don’t think anyone can. When you’re in a room for a couple of months, it’s going to get a bit stanky at times I think. So, it’s tough when you come from 48 hours before this, I was in my house with my family, my kids running around and doing that kind of normal life.”

Meyers Leonard, Heat center: “I’ve heard that the player lounges are nice. I saw some stuff on social media where guys were playing bags. Let me just tell you something — I come from the sticks, No. 1. No. 2, I went to the University of Illinois. I am nice at bags. So anybody can meet me there.”

Evan Fournier, Magic guard: “It kind of feels like when I was back in high school where you have everything together. So you have where we stay at, our rooms, then we have the lunch area, dinner and the practice facility is like right there. Everything is close. There’s a little bit of that Olympic Village kind of a feeling, so I’d say that’s what it feels like.”

Erik Spoelstra, Heat coach: “Nothing’s normal. We’ve learned that over the last several months. But we’re confident and pleased with the protocols that the NBA [has] and the plan they’ve put in place. It’s not going to go perfectly the first few days certainly, but we feel good about the plan.”

De’Aaron Fox, Kings guard: “You can focus on the social injustice stuff while hanging out with your teammates and doing other stuff. … You’re off the court for most of the day. You’re not going to sit there the entire time and think about social justice issues. You’re going to want to have fun and enjoy yourself while we’re here. I mean, there’s a time and place for everything.”

MORE: How the NBA picked the barbers for the bubble

JR Smith isn’t a fan of the blanket he was given in his hotel room in Orlando, but he did enjoy the selection of food.

More than the bare necessities

The NBA provided welcome kits in each player’s room upon their arrival, but many players made sure to bring more than clothes as they settled in to what could be their home for the next three months.

P.J. Tucker, Rockets forward: “[For shoes] I’m bringing the big boy out for Orlando, I’m not gonna lie. The big, 24-case joint. I’m bringing that. I got to! Cause I won’t be able to get nothing else in there. I’ve gotta go all-in. Everything needs to come day one. Between the pairs that I bring, and the pairs the equipment manager brings, I would say I’m going to have north of 60 pairs of shoes with me. I’ll bring two 24s and one 16. For sure. You know me, I gotta have choices and options. I need a big room.”

Richaun Holmes, Kings center: “Man, I just threw something of everything [in my bag]. Like, my whole drawer is in my suitcase. Everything in my front row that was hanging up is in my suitcase. I brought like three or four different bags and just stuffed them with everything I could find. I wouldn’t even call it ‘packing,’ just more like throwing stuff in a suitcase as I go.”

Luke Walton, Kings coach: “The strangest thing I brought that I’m very happy I brought now is, I dedicated a whole carry-on bag to my coffee. Which is like seven pounds of coffee beans, my coffee grinder, I got a French press in my room, because I knew we were going to be quarantined so I couldn’t trust whatever was going to be in my room.”

Ja Morant, Grizzlies guard: “I brought my own food down here, so I’m good. I’m a ramen noodles guy, so I’m used to all this.”

Seth Curry, Mavericks guard: “I put a couple orders in, stuff that I realized I needed once I was in the room and in quarantine. … I got a little humidifier. Just to make it more [like] home, a little bit more comfortable. I got a couple other things too.”

Reggie Jackson, Clippers guard: “I think [Montrezl Harrell] is one of the biggest forward thinkers. He brought a portable sauna, which is the coolest thing. Got to see that. Lou [Williams] brought his studio. Hopefully after this championship run, he’ll drop an EP talking about this whole experience.”

Danilo Gallinari, Thunder forward: “I think the coolest thing was that [Steven Adams] brought his guitar. Which, I knew he was playing guitar at home, but to bring it to Orlando, I didn’t know he was going to do that. Me playing a little guitar too, I think we’re going to find some time to play some guitar.”

Carlisle: “I brought an exercise bike down and some weights and stuff like that, so I work out every day. I also had a piano sent down here, a keyboard. That’s another thing to do to pass the time and work on something constructive and try to get better.”

Goran Dragic, Heat guard: “I didn’t bring nothing special. As long as I have my iPad and my phone so I can talk to my family, FaceTime and see my kids, that’s good enough right now in this situation.”

Fournier: “I pack always last minute, so I forgot a bunch of stuff, but I don’t really care, to be honest. I have my phone, I have my computer, that’s all I need. I have a few books. Of course, it could be better; but my wife is in France anyways, so I’m not going to be able to get some packages delivered, and it’s OK.”

Wesley Matthews, Bucks guard: “Brought some candles, some air scents and smell-good stuff that kind of reminds me of my place back in Wisconsin to try to just have some resemblance of home or resemblance of comfortable and familiarity. Brought a picture of my daughter and I, got that by the nightstand, by the bed.”

JaVale McGee, Lakers center: “Uh yes, everything. I packed like I’m moving into a new apartment or something. I brought my bike. I brought my gaming setup. What else did I bring? I mean, I brought a lot of stuff that I wouldn’t bring if it was just a regular road trip, obviously. I had like 10 bags. So, yeah, it’s crazy.”

Hotel parties, Disney magic and a Bobi-Tobi reunion are only the beginning of the Mavericks’ bubble adventures so far in Orlando.

Get your game on

While each team has its own players lounge with gaming systems available, multiple players mentioned bringing their own gaming systems from home to set up in their rooms.

Morant: “I brought my PS4. That’s all I really do. I brought Martin down here to watch. I got an iPad for film. I watch TV. This is normally what I do at the house — just sit around, watch basketball, stay to myself. If I play the game, I play with my friends or whatever. So I’m doing fine.”

Terrence Ross, Magic guard: “Of course, I brought my PlayStation, my streaming cameras, I brought three laptops for my podcast [I’m] trying to set up and get running out here. What else? I brought a gaming chair that I need for all of that because these hotel chairs are terrible.”

Curry: “Obviously brought the video games so I can get that going. Just the essentials. And pretty much video games, golf clubs and a couple other things I had to order to make my room a little bit more comfortable, feel like I’m at home.”

Heat center Meyers Leonard gives a tour of his gaming setup inside his hotel room at the NBA bubble.

The leader of the club

Then there is Robin Lopez. The Milwaukee Bucks center is a lifelong Disney fan, and he appears to be loving life through his first few days inside the Disney “bubble.”

Why do we even need those Fire TV sticks @nba? pic.twitter.com/QsOceYAzY0

Got stuck at the Dig Site arcade just now when a storm hit…but at least there’s pinball #WoeIsMe pic.twitter.com/3Gl8VJzjqO

MORE: Here’s how NBA players and teams arrived to Disney