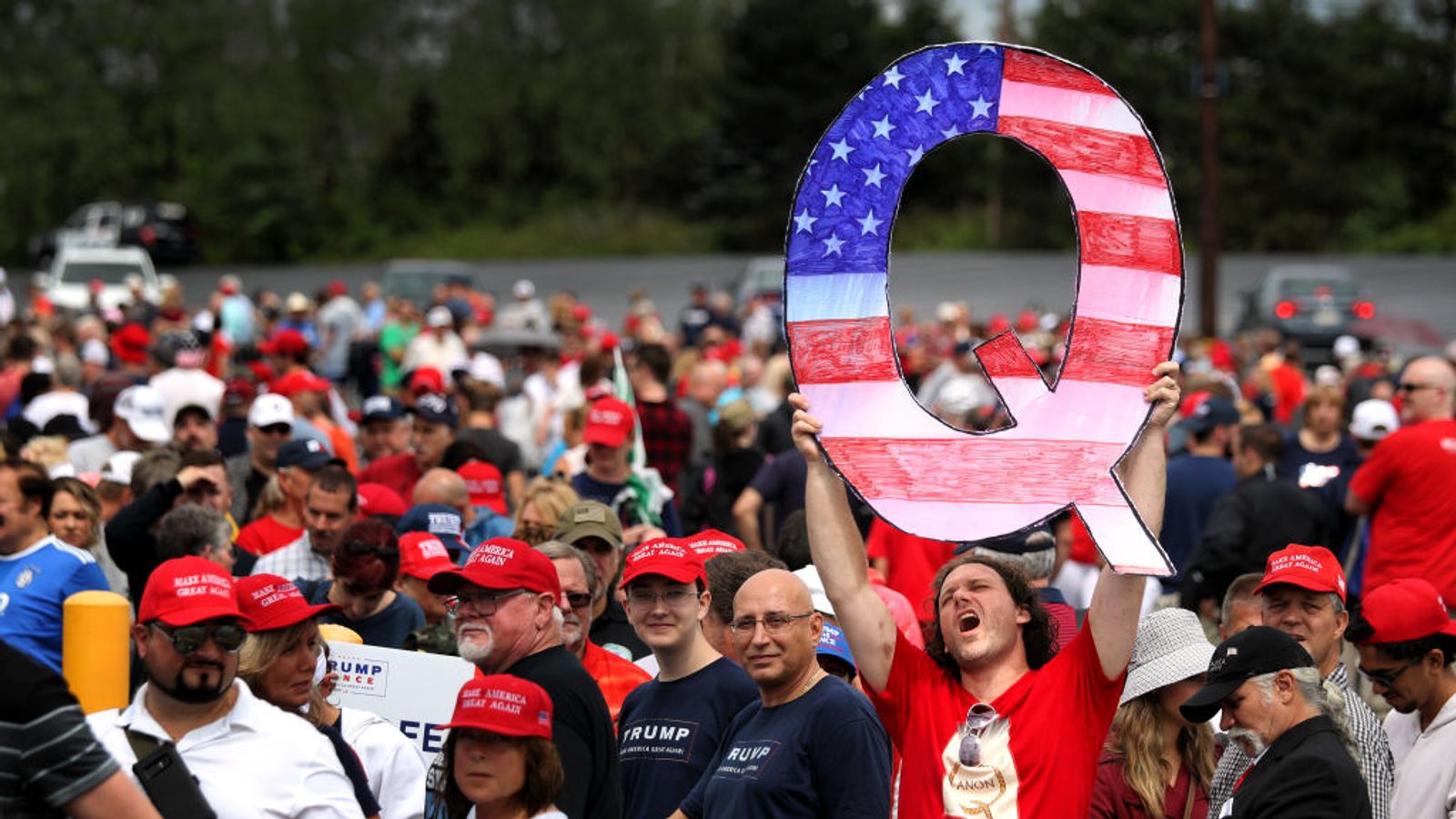 It has been described as a right-wing conspiracy theory, an emerging religious movement, and even as a domestic terrorism threat in one FBI bulletin – but what exactly is QAnon?

Put simply, QAnon is a surprisingly popular hoax based on the cryptic posts of an individual or group purporting to possess inside knowledge of the Trump administration’s secret fight against an evil global cabal.

QAnon’s followers (which include at least one Republican candidate for the US Senate) often disagree about very significant details of the conspiracy which they believe is taking place.

What details do they agree about?

Generally they all believe that Donald Trump is fighting against a secretive and evil global cabal, members of which include former Democratic presidential candidate Hillary Clinton and the billionaire liberal philanthropist George Soros, who both have been hate figures for the American political right for many years.

The supporters believe that a person or group inside the administration – the eponymous “Q” – is posting coded messages online to inform Mr Trump’s supporters about this secret war, and preparing them for an imminent event in which the president overthrows the evil cabal and imprisons its members.

Isn’t this the plot of a bad young adult fiction novel?

It might sound like one, but banners proclaiming Q are very popular at Mr Trump’s re-election rallies and at campaign events for other Republicans who have expressed support for him.

It is a much bigger deal that the substance of the conspiracy theories might lead you to believe.

Has Q ever provided any evidence of the claims?

Not only is there no evidence, but many of the claims Q has made – whether predictions regarding particular events on particular dates, or factual accusations – have been proven to be false.

But rather than lose supporters as a result of these incidents, Q has explained that the predictions and claims which haven’t come to pass were actually purposeful misdirection, and a necessary part of their cryptic revelations.

Psychologically this only serves to strengthen supporters’ belief in the conspiracy, Professor Stephan Lewandowsky at the University of Bristol explained to Vox, encouraging supporters to internalise any evidence which contradicts the claims of Q simply as evidence of the conspiracy against it.

After all, people believe in conspiracy theories because they fulfil psychological needs – not because they present convincing rational arguments, as Professor Karen Douglas told Sky News.

The messages were initially posted on 4chan, and have now moved to 8chan – internet forums which are significant hubs for the far-right due to their lack of content moderation.

Now, across fringe and mainstream social media platforms, there is a significant community of people who express a belief in the conspiracy and who come together to collectively interpret Q’s cryptic messages.

Posts and videos discussing these messages and riddles, whether offering interpretations or providing apocryphal commentary on the cabal, can regularly reach hundreds of thousands of views.

How are social media companies reacting?

Reddit has banned the /r/QAnon community for inciting harassment.

Twitter has announced it was taking action against “so-called QAnon activity” on the basis it could lead to offline harm, and said more than 7,000 accounts involved in QAnon had been removed from the platform for violating the company’s rules against spam, manipulation, and ban evasion.

Twitter added it would no longer be allowing content and accounts associated with QAnon to appear in its trending section or its recommendations, and that URLs associated with it would be blocked from being shared on the platform.

QAnon videos have also been downgraded on YouTube, and searches for the term receive a box providing context about the movement – in this case the Wikipedia article – similar to how coronavirus videos receive context boxes directing to national health authorities.

Despite the downgrading, YouTube remains a popular platform for accounts discussing the cryptic messages – some of whom regularly reach hundreds of thousands of viewers with each video

There are dozens and potentially hundreds of QAnon groups on Facebook, which the platform doesn’t apply any overt moderation to in the style of the other platforms.

Some of these groups are very active, featuring tens of thousands of members and thousands of posts every day.

Does Donald Trump know about this?

Supporters think he does, and point out that he has retweeted multiple accounts involved in spreading the QAnon message – although there is significant evidence the president doesn’t do much vetting of the messages he retweets.

At a rally for Mr Trump in Cincinnati last August, a man warming up the crowed used a QAnon motto “where we go one, we go all” to conclude his speech, although he later denied it was a reference to the conspiracy theory.

Did the FBI really describe them as a domestic terror threat?

An intelligence bulletin from an FBI field office in Phoenix, published by Yahoo News, specifically mentions QAnon and other “conspiracy theory-driven domestic extremists” as a domestic terror threat.

It added that the risks posed by these extremists were likely to grow during the 2020 presidential election cycle.