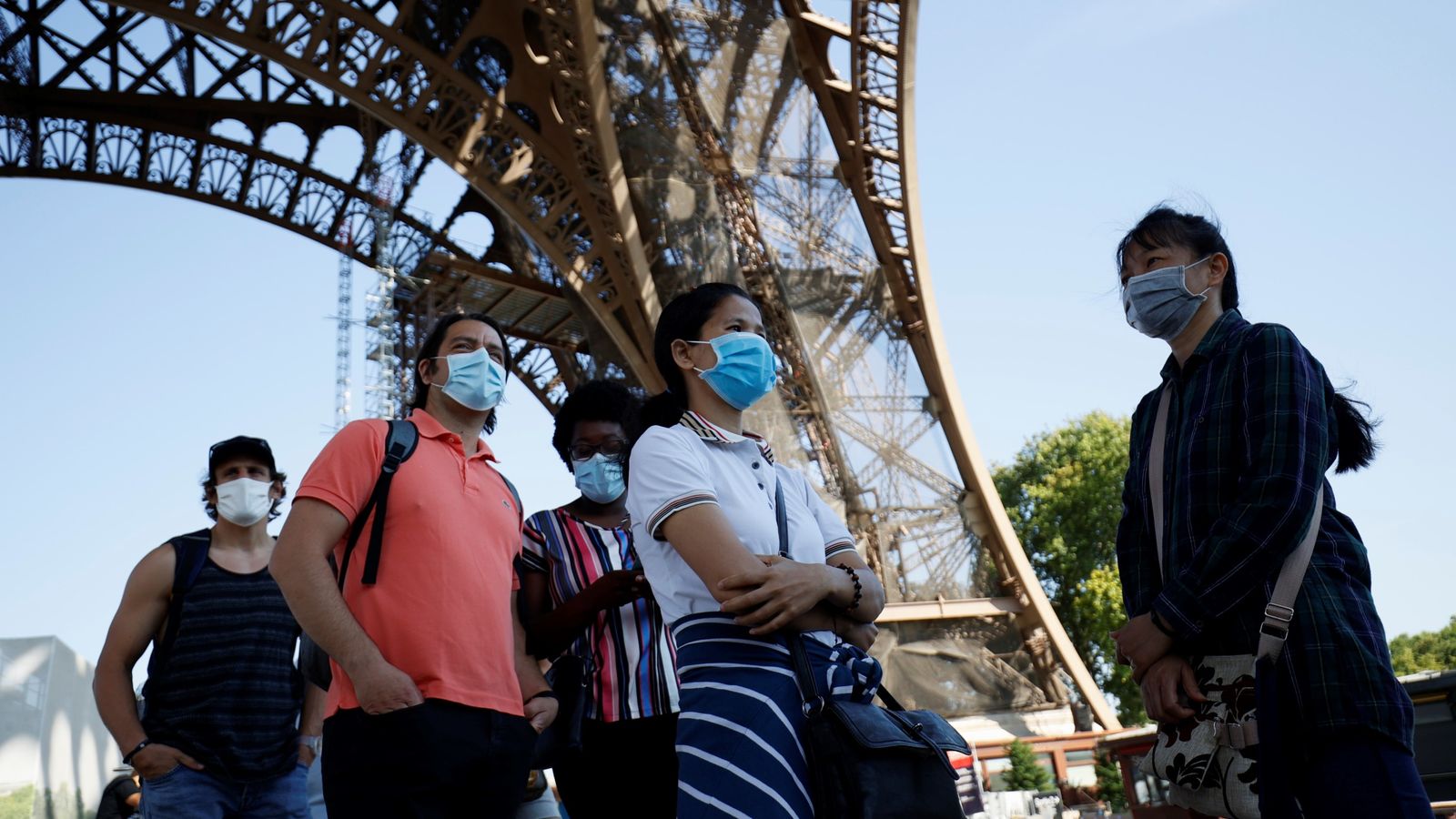 France has declared a significant rise in coronavirus cases – as researchers have said traces of COVID-19 are once again being found in Paris’s sewage system.

It marked the second day in a row that the country had seen a sizeable rise compared to earlier in the week, after a series of localised flare-ups prompted officials to make mask-wearing compulsory in enclosed public spaces.

The health ministry said there had been a 66% increase in cases over three weeks, and that a lag between people becoming infected and displaying symptoms meant the virus had likely been circulating “for several weeks already”.

The mayor of popular beach resort La Baule-Escoublac has warned the tens of thousands of tourists flocking there to observe social distancing, after the town was flooded with holidaymakers.

Meanwhile, researchers say some locations in Paris that had been testing negative for traces of coronavirus in their wastewater have been testing positive again since the end of June.

The virus traces had initially been detected at the beginning of the outbreak, but vanished when France went into lockdown back in March.

Early studies by scientists across the globe have suggested that sampling sewage for signs of COVID-19 could help estimate the number of infections in a geographic area without having to test every person, and could act as an early indicator before people are even diagnosed or sent to hospital.

Parisian researchers said in April that sampling wastewater in the French capital for a month reflected the rising and falling number of infections there.

Laurent Moulin, who heads a research laboratory run by public water utility company Eau de Paris, insisted the new findings on their own did not mean the virus is spreading again.

But Mr Moulin said the findings could be used in conjunction with other data to detect early warning signs, even before people become sick enough to seek medical help.

“We had the lockdown, which reduced the number of sick people, and then a little while later we saw a reduction of the concentration of [COVID-19] in the wastewater,” Mr Moulin said.

“What are we seeing since the end of June? We’ve seen some locations that were negative [for virus traces] and are becoming positive.”

To collect the samples, workers at a sewage plant in Noisy-le-Grand, in the eastern suburbs of Paris, have been filling plastic bottles with wastewater and putting them in a cool box.

These are then taken to the laboratory, where they are analysed by researchers in biohazard suits and masks.

The researchers test for coronavirus genomes – fragments of the virus’s genetic material which are not infectious and can be emitted by people who have no symptoms.

The evidence gathered by the laboratory will be used along with other data to track the progression of the virus.

Scientists in the UK, led by the UK Centre for Ecology & Hydrology, are conducting a similar study of wastewater.

France has the sixth-highest COVID-19 death toll in the world and reported 10 on Thursday, taking its total to 30,185, according to figures being tracked by Johns Hopkins University.

Neighbouring Belgium has also reported a 91% spike in infections in the last week, forcing the country to U-turn on its plans to ease lockdown measures.

In Spain, authorities have introduced tighter restrictions in an attempt to stamp out more than 280 coronavirus clusters.

The country’s health ministry reported 2,615 new cases on Thursday, compared with a daily average of 132 in June.