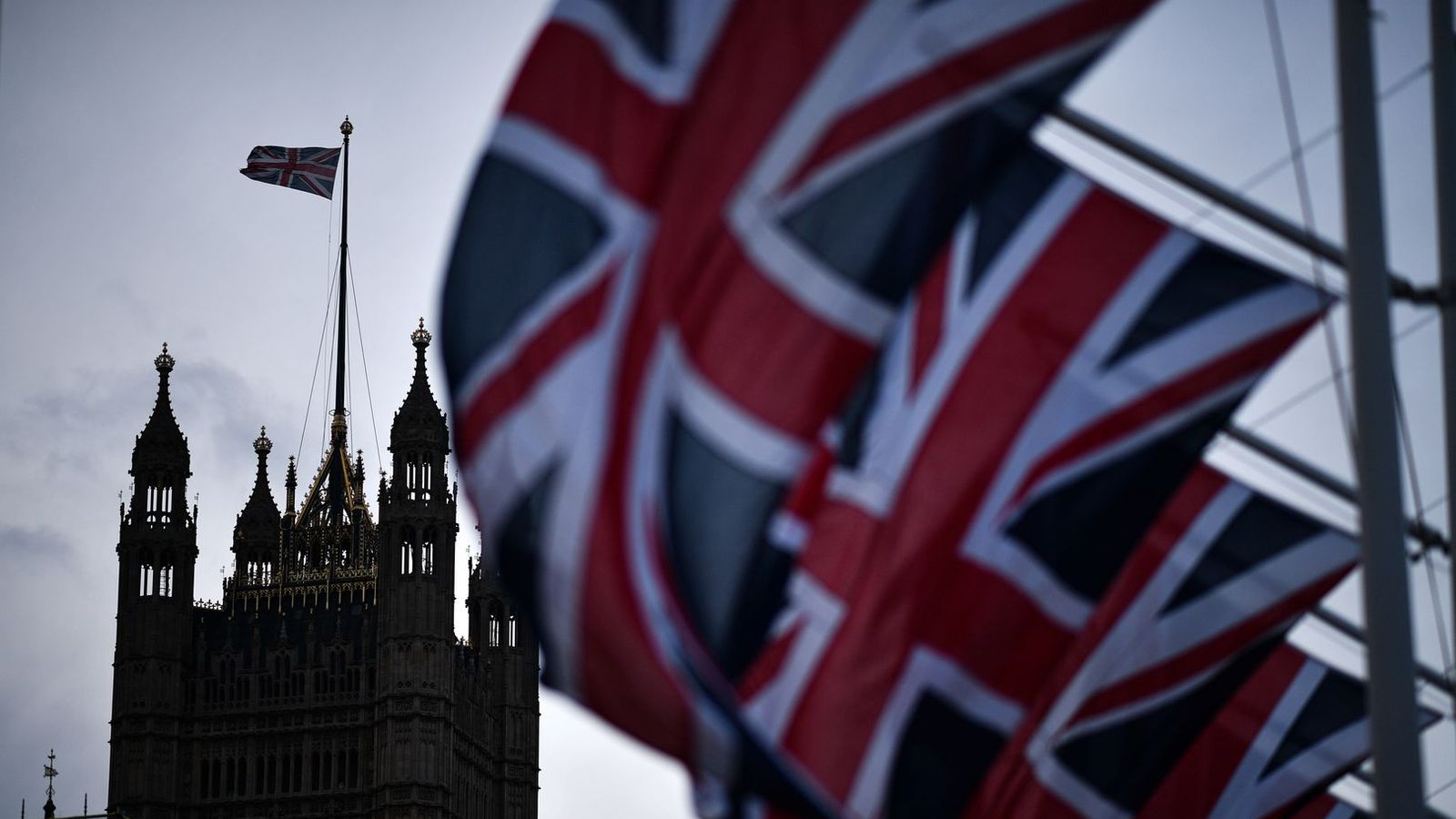 Yet today, questions of “The Union” too often boil down to the Boris and Nicola pantomime, as prime minister and first minister dance around re-running the Scottish independence question.

The challenge of governing the UK today is so much bigger than this, however.

Travelling 2,000 miles across and around the kingdom, and speaking to the leaders of all the nations as well as their citizens, there are strains and challenges evident like never before.

Sky News has seen how coronavirus was handled differently across the four nations of the United Kingdom causing angst in Westminster, while Brexit is generating fresh warnings from one-time allies, and bringing a fresh focus on all unions, everywhere.

Here are five reasons why the Union’s future feels uncertain…

1. A second Scottish independence referendum is far from impossible

Boris Johnson has vowed never to authorise a second Scottish independence referendum, and there is no reason to doubt his word on this, however strong the pressure from north of the border. But that doesn’t make it impossible.

Speaking to Sky News, leader of the Welsh Labour Party and First Minister for Wales Mark Drakeford revealed how it could happen.

He insisted no prime minister should have the right to stand in the way of an independence referendum in either Scotland or Wales if the people wanted one. In other words, should he be in Number 10, Keir Starmer should not block a vote on Scotland breaking away from the UK in the way Mr Johnson is currently doing.

“I am very clear that if a population in Scotland, or indeed in Wales, wanted to hold a referendum it is for the people of Wales and the people of Scotland to make that decision,” Mr Drakeford told me.

“And then that decision must be respected. So that’s my starting point… is that no Labour leader should argue that the component parts of the United Kingdom can be prevented from navigating a future for themselves.”

This is a headache for Sir Keir.

Successive Labour leaders have ruled out “pacts” with the SNP in the event of a hung parliament – and continue to do so – but the consequences of high stakes government formation talks involve unpredictable outcomes. The voices around the leader are crucial.

Richard Leonard, the embattled Scottish Labour leader, was unable to say never to supporting a second referendum, even though he readily declares “never” to supporting independence.

He told Sky he wants a “mandate” next May against a second referendum in the Scottish elections, an argument likely to hurt him if the SNP win big in May.

Separately, there is an outside chance the Supreme Court may eventually force the hand of the Westminster government to hold one sooner – in what would be an epic fight of mandates and arguments over sovereignty – though this involves too many legal imponderables for many in SW1 to have got their heads around yet.

Mr Hart says he does not have a crystal ball.

2. The SNP may not need to show how an independent Scotland can pay its bills to win

The clinching argument of the 2014 referendum – that Scotland can’t afford to go it alone – may no longer be sufficiently effective.

Pressed over whether a newly independent Scotland could borrow massively without the support of a Bank of England – which in March had to step in to defend high borrowing by the UK government – Nicola Sturgeon insisted Scotland would cope.

Initially Scotland would use Sterling before changing to a “different currency arrangement” or “a separate Scottish currency”.

But she added: “The idea that Scotland uniquely in the world is not capable of having its currency, of having the infrastructure to support that and operating like other small countries, the world over does, is just nonsense. And we are a country that has greater resources than many other countries across the globe, and we are perfectly capable of becoming an independent country and operating successfully an independent country.”

On the streets of Edinburgh, voters wanting independence showed little concern for the warnings, which echo so-called “Project Fear” during Brexit.

Asked whether Scotland could afford another coronavirus or a scheme like furlough, one young independence supporter thanked the Treasury, admitted there’d probably be a problem but then said “we don’t know until we do it”, and reaffirmed his commitment to breaking away.

This should worry cabinet ministers as they work on their arguments for the Union in the coming months.

3. Northern Ireland is the most fragile part of the United Kingdom, not Scotland

Northern Ireland has handled coronavirus strikingly differently, not that Westminster has noticed, necessitating co-operation with the Republic of Ireland, which is likely to cause angst among some unionists.

The government has developed a coronavirus contact tracing app compatible with the one in the Republic of Ireland. A north-south memorandum was struck with Dublin, hailed by nationalists, and work was done to keep the border flowing with the North.

Pubs in Northern Ireland did not reopen along the timetable of the British mainland, instead more closely to the Republic’s decision to keep them largely shut.

“I think coronavirus has changed the way everything works at this moment in time,” Robin Swann, Northern Ireland’s Ulster Unionist health minister, told me.

“I have as good a relationship with the health minister in Ireland as I do with Matt Hancock.”

He, like DUP first minister Mrs Foster, deny this is a shift with any constitutional implications, and reject the idea that embracing of Belfast-Dublin co-operation has any greater resonance beyond sensible information sharing in a global emergency.

Asked if people think political allegiances in Northern Ireland are moving because of coronavirus co-operation with the Republic, Mrs Foster said: “Well they’re definitely reading too much into it a lot. I mean, that’s not the case.”

However, Séamas de Faoite, nationalist on Belfast council, disagrees. He thinks “the conversation (about whether Northern Ireland’s future is with the Republic) has very seriously begun”.

The SDLP councillor added: “In the context of Northern Ireland’s politics coronavirus is neither green nor orange, it doesn’t respect or adhere to any constitutional viewpoints or barriers, and that has prompted us into the position where there is a realisation that north-south co-operation works, no matter what your constitutional position.”

One of the United Kingdom’s most senior unionists jokingly placed a bet with me that Northern Ireland might be the first to break away, before Scotland.

Constitutionally, there is a case for this.

This means the risks are huge.

Could community peace be maintained in the event of a referendum on its borders, given the turbulence which the 2014 and 2016 votes across the UK caused?

Ministers should not assume Wales’s future is assured in the event the other nations break away. Welsh first minister Mr Drakeford told me “we have to stand up for Wales, but Wales is part of the United Kingdom” – but added that “if the United Kingdom were to fracture… then everybody will have to think about the way in what remains can go on working for everybody”.

4. Boris Johnson’s ministers do not much like devolution as it stands

Coronavirus has meant a “great awakening” about the realities of devolution – the three nations’ ability to govern themselves in certain areas – Ms Sturgeon told Sky News. She felt too few in Westminster were ever even aware Whitehall has no direct control over health outside England.

Ms Foster and Mr Drakeford both say the ability to differ responses from Westminster have proved devolution is a success.

Yet cabinet ministers cannot hide their discomfort with it.

Scottish Secretary Mr Jack said he wished nations would not move at different speeds on coronavirus. “I would prefer we move as one, particularly because my constituency… especially close to the border… and it has been confusing for people, all the different rules regulations. And I know that others have said that from other parts of the UK to me, so I would prefer we move together as one.”

Welsh Secretary Simon Hart suggested that the first minsters have been playing politics in some cases with coronavirus.

“The idea that Wales or Scotland or NI or England may do things differently because they can,” he said.

“I think that is quite frustrating if you happen to be a business, charity, family, or individual, which may particularly in Wales’ case, have significant cross-border interests. If you’re struggling to run a business and you may be in one of the border counties when you rely very heavily on cross-border activity, that can be intensely frustrating and give rise to people thinking that this is about politics. It’s not about COVID or or economy.”

The Tory response to the challenges of the union is to fly the flag – something Ms Sturgeon believes pushes up support for independence.

Boris Johnson has announced a festival next year marking 100 years since the creation of Northern Ireland, while the UK government has just moved into a new “hub” in Edinburgh where there is a room big enough to hold cabinet meetings.

He argues: “I’ve never been much attracted to, sort of, ‘Rule Britannia’ British value sentimental argument to the United Kingdom unless you can make it work practically and demonstrate to people it makes a difference in their lives in the case has diminished, but I think you can make that practical case.”

Few would be surprised that Mr Drakeford or Ms Sturgeon warn against a no-deal Brexit, or the consequences of a deal.

But its implications in Northern Ireland are the least understood – as talks are still ongoing – and potentially far-reaching.

Speaking to Sky News, Ms Foster makes no secret of the strains it has caused to the Union.

“I think it did damage the relationship between the two of us,” she said, referring to Boris Johnson who agreed a deal with Brussels that she and the DUP vehemently opposed.

“And that’s what I’m engaged in the present.”

She worries no deal means more checks on goods coming from Great Britain.

She says she doesn’t see evidence of the Westminster government heading for no deal, but is cagey about Dominic Cummings and his commitment to the Union, but says that Michael Gove is her champion inside government.

“I have only met Dominic Cummings on a very limited number of occasions, and I don’t know what his inner thoughts are in relation to the Union. But I know that there are many other voices there as well, who absolutely advocate for the Union.”

Pressed on whether everyone wants a deal in government that will protect the Union, she appears to concede they do not.

“With Ms Sturgeon warning of the economic damage, Scottish Secretary Mr Jack told me there was no question the government would succeed in getting a deal eventually.”

“There is no doubt that Scotland voted over 60% against Brexit and that has upset people and I think we saw that reflected in the results in the general election in 2019 but I will say to people, you know, hold your nerve. We will get a deal.”