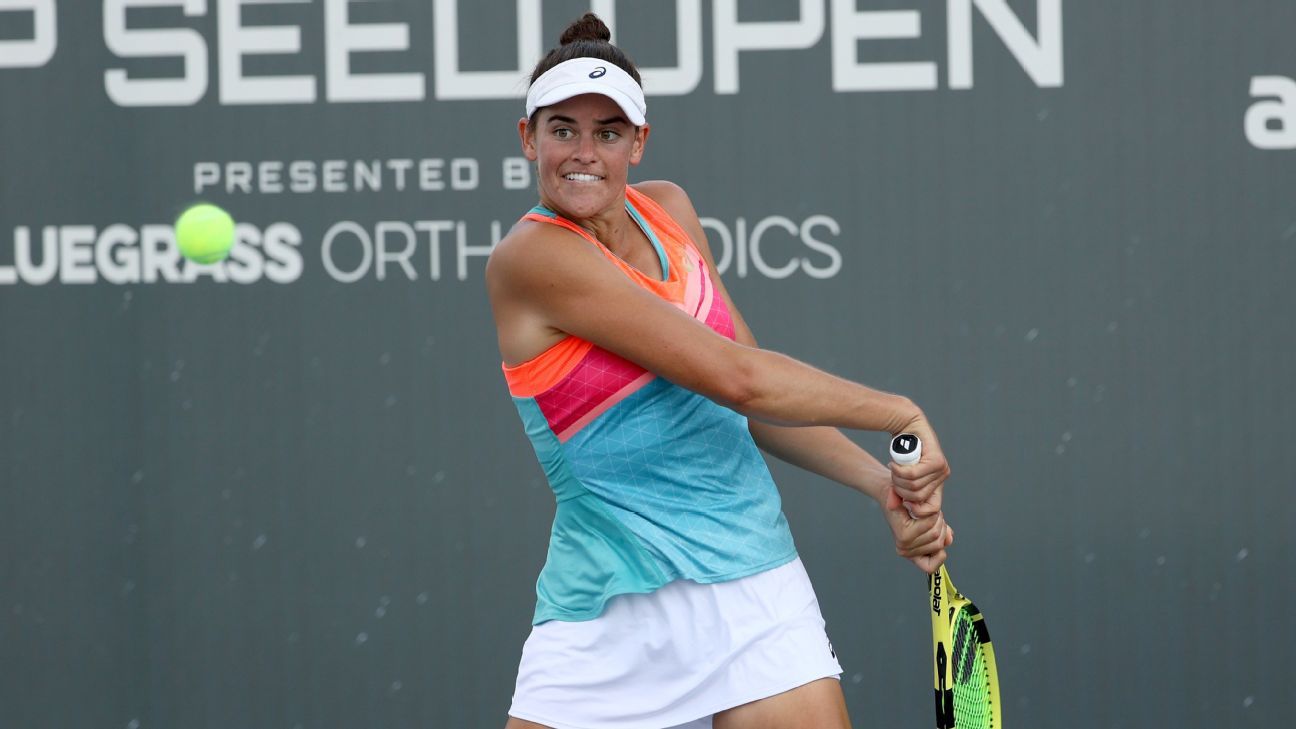 As one of the most highly touted junior tennis players in the country, the coaching staff at UCLA didn’t know what to expect from incoming freshman Jennifer Brady when she started at the school in the fall of 2013.

She had been ranked as high as No. 36 in the world as a junior and played in three of the four girls’ Grand Slam events. Head coach Stella Sampras Webster wasn’t sure if Brady would immediately expect to be the Bruins’ star player and be disappointed if she wasn’t in the No. 1 spot on the roster right away.

But Sampras Webster found herself pleasantly surprised by what happened when Brady arrived on campus.

“Jenny had such a unique mentality right from the start,” she said earlier this week. “So many players come in with somewhat of a selfish attitude and want to play high, and they want to play against the best, but her focus was simply about getting better. She said to all of us on the coaching staff, ‘I don’t care where I play. Just make sure I’m playing the right way.’

“She just used every single match, every single practice as an opportunity to get better. She didn’t get caught up in any of the other stuff. She knew if she just kept working and stayed focused, she could improve enough to be a pro. And she certainly has proven she could do just that, and that her hard work paid off.”

Now ranked No. 41 in the world, Brady is one of the hottest players in the game since the season restarted after a six-month suspension because of the coronavirus pandemic. She won her first career WTA title at the Top Seed Open in Lexington, Kentucky, in the summer’s first event in August and advanced to the third round at the US Open on Wednesday with a 6-1, 6-2 win over fellow American CiCi Bellis.

Brady, 25, needed just 51 minutes to earn the second-round victory. She did almost everything right — she hit four aces and 21 winners (compared to just four for Bellis) and had just 13 unforced errors. It was a clinical and convincing win over Bellis, the former teen phenom. Bellis, now 21, burst onto the scene as a 14-year-old during the 2014 US Open as she won her opening match and cemented her spot as a rising star.

Brady had a significantly different road. She could have turned professional following her junior career, but knew her game wasn’t quite ready to compete at the highest level. She took the road less traveled and went to the NCAA. Although there are an increasing number of women on the WTA Tour who have played in college, including Danielle Collins and Kristie Ahn, Sampras Webster said there is still something of a stigma about it.

“I learned how to train and definitely spent a lot more time on court practicing and in the gym,” Brady told ESPN of her time at UCLA. “[Before] I would do things a little bit, I want to say half-assed but I don’t know if I can swear, but I learned how to be more professional.”

After two college seasons, which included a team national championship and multiple All-American honors, Brady turned pro. It wasn’t an easy road. Brady had to work her way up on the ITF circuit. In one of her first matches — at a 50K event in Las Vegas in 2015 — she took on Alexandra Stevenson, the former Wimbledon semifinalist and current ESPN analyst.

“She outplayed me with her forehand, I remember that,” Stevenson said after calling Wednesday’s Brady-Bellis match. “I knew she was going to be a good player and could play at this level, but there’s a lot else that goes into it. I think a lot of people don’t realize how hard it is to do that, to get your ranking up enough to play in WTA events and the financing you need. But she did what it took and went all over the world playing in these small tournaments, and obviously was able to make it.”

It is that experience that Stevenson believes prepared Brady for the current conditions at the US Open.

“Going from ITF to the WTA is like going from Motel 6 to the Four Seasons,” she said. “The level of competition is high there, but everything else is so much different. She’s used to not having people in the stands or ball kids and just having to do so much herself. But having gone through that makes you a fighter, and that’s what we’re seeing with her. She never gives up because she’s had to work hard to get here.”

Brady won four singles and five doubles titles at the ITF level before she was able to consistently play in WTA events in 2016. She had a breakthrough season in 2017, advancing to the fourth round at both the Australian Open and US Open, but she struggled with achieving consistent results. She found more success in doubles (she and partner Alison Riske reached the semifinals in Melbourne in 2019).

Everything was coming together for Brady to start 2020. She defeated world No. 1 Ashleigh Barty in front of her home crowd in Brisbane and moved into the top 50 for the first time in her career. She beat Elina Svitolina, another top-10 player, in February in Dubai and ultimately made it to the semifinal.

Tennis makes its return to the big stage! Play for FREE, answer questions and compete for $1,000! Make Your Picks

Despite the long break from competition, Brady returned to the court in August and won her first WTA title. She will now face Caroline Garcia, who knocked off top-seeded Karolina Pliskova in straight sets on Wednesday, in the third round of the US Open on Friday (1 p.m. ET, ESPN).

Sampras Webster, who eagerly has been watching all of Brady’s matches and texting with her afterward, believes Brady very possibly could come out ahead against Garcia and continue her run in Queens.

“If she can just maintain her composure and be able to relax and continue to play and not get overwhelmed and thinking about too much, then I think she can beat anyone,” she said. “There’s just no limits to her right now, because she’s got a great serve. When she’s serving well and she’s hitting her forehands well, she’s tough to beat.

Brady says she is as capable as anyone right now to win her first major title next week.

“I think in the women’s game anybody could win a Grand Slam,” she said. “I think just being out here playing and having some good wins, it definitely boosts my confidence. And knowing that, if I’m here a week-and-a-half from now playing in the finals, I can go out there and win that match. [That’s] definitely a belief in my mind.”