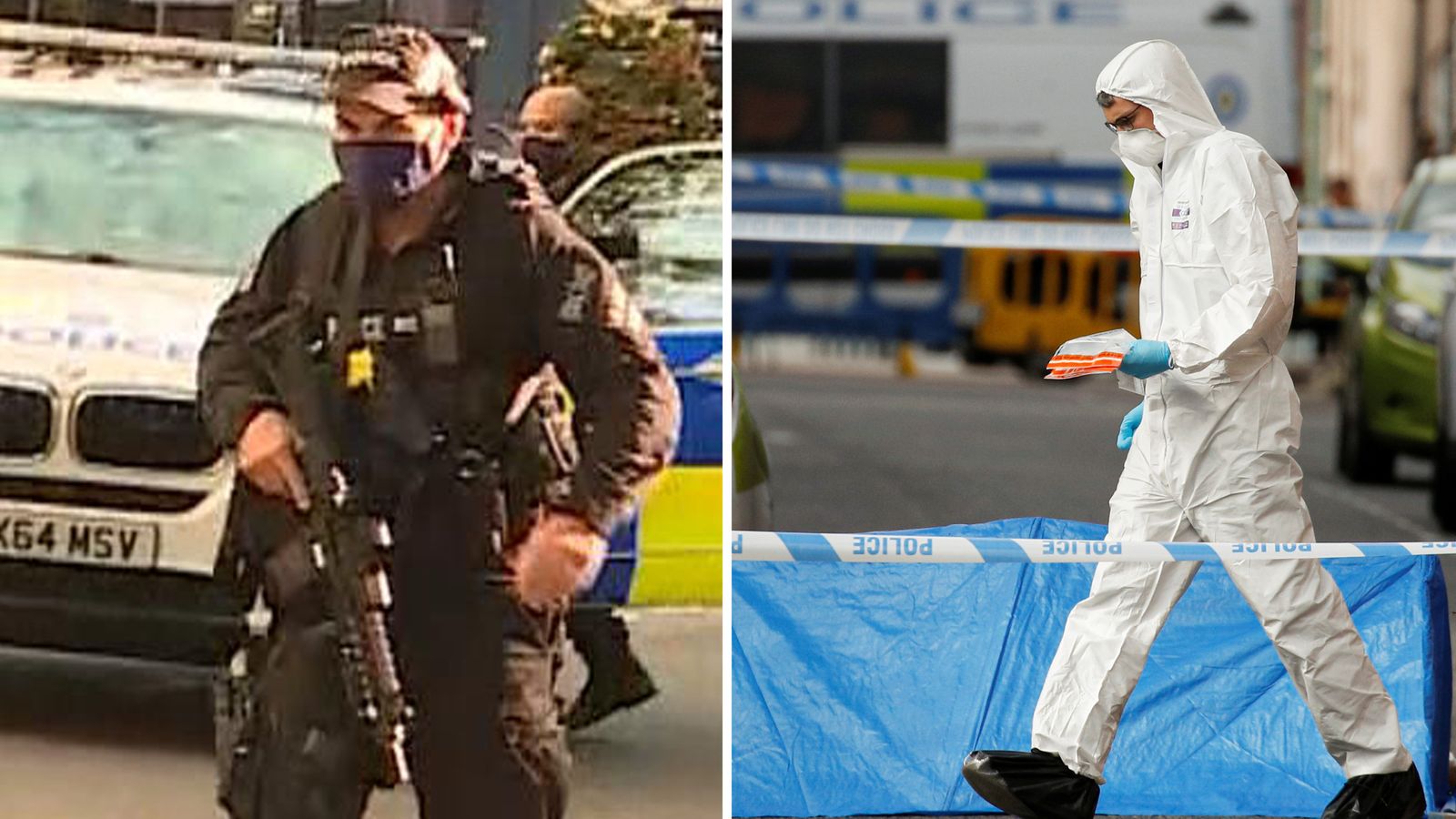 One man has died and two other people are seriously injured following a “random” series of stabbings in Birmingham city centre.

Five others were also injured in what West Midlands Police have described as a “major incident” overnight – and a murder investigation has been launched.

One unknown male suspect is being sought but no arrests have been made, Chief Superintendent Steve Graham told a news conference on Sunday, adding that the public should remain “alert”.

There is no suggestion of terrorism, gang involvement, that firearms were used or that the stabbings were a hate crime, he said, describing it as a “random attack with no clear motive” and saying no links had been found between the victims.

Officers and ambulance crews were called to reports of a stabbing in the city centre at 12:30am on Sunday, and a “number of other stabbings were reported in the area shortly after”.

“We believe the incidents, which took place between 12.30am and 2.20am, are linked and we’re doing all we can to find whoever was responsible,” Mr Graham said.

The first attack took place in Constitution Hill, to the north of the city centre, he said, before further attacks in Livery Street, Irving Street and Hurst Street as the suspect made his way south towards the Arcadian area.

Eyewitnesses reported as many as eight people were injured during what Mr Graham described as a “linked series” of incidents.

Police confirmed early on Sunday morning that a “major incident” had been declared, but work was still ongoing to determine how many people had been injured.

The force later said ahead of the 11am news conference: “We can now confirm that we have launched a murder investigation following last night’s events.

“A man has died and another man and a woman have suffered serious injuries. Five others have also been injured.”

“Significant resources”, Mr Graham said, were being used to track the suspect, denying reports the man was seen running out of the area.

“Already we’ve got people going down drains, we’ve got that level of detailed searches taking place which will hopefully reassure the people that we are doing everything we can do to trace the offender,” he added.

“About 14 ambulances” were sent to Birmingham city centre from around midnight, West Midlands Ambulance Service spokesman Nathan Hudson, who was also one of 11 attending paramedics, said.

Seven patients were treated by ambulance staff, five of them were taken to the city’s new Queen Elizabeth Hospital.

Mr Hudson said: “Three have suffered critical injuries and sadly one man had lost his life … Two further patients were transported to Heartlands Hospital and an outpatient with minor injuries was not transported with ambulance assets.”

Emergency service personnel – including armed police – have remained on the scene throughout the morning, with forensic tents having been erected in several streets and road closures in place.

One small blue forensic tent was seen in Barwick Street and two other tents were put up in Irving Street, close to the gates of a primary school.

Several yellow police evidence markers could also be seen on the ground, some near to broken glass.

Police have urged people to remain calm and stay away from the area, and have warned that the response would be ongoing “for some time”.

Most of Hurst Street, which runs past the Arcadian, was taped off on Sunday morning, in an area which had already been closed off to traffic to aid social distancing.

Boris Johnson thanked the emergency services and said his thoughts were with anyone affected by the “terrible incident”, while Home Secretary Priti Patel said emergency services were “working hard to find whoever is responsible and bring them to justice”.

All my thoughts are with those affected by the terrible incident in Birmingham last night.

My thanks to the emergency services who are working hard at the scene. Anyone with information should contact @WMPolice

All my thoughts are with those affected by the shocking incident in Birmingham last night.

Our emergency services are working hard to find whoever is responsible and bring them to justice.

Foreign Secretary Dominic Raab said anyone close to the area should be “very vigilant”.

Speaking to Sky News’ Sophy Ridge On Sunday, Mr Raab said: “My thoughts are with the victims and their families, there is obviously an ongoing police investigation.

“I can’t say too much more at this stage, but people should be very vigilant if they are in that area.”

West Midlands Police and Crime Commissioner David Jamieson said a rise in violence was “almost inevitable” due to the pandemic.

He told reporters “a lot of the pent-up feelings of people have, and not being able to get out, and combine that with people who are now unsure about their future and about their jobs, it was almost inevitable that we would see a growth in violence.

“I’m not saying that this is directly related to that, but nevertheless we are seeing now a growth of violence among younger people, particularly younger males, we’re seeing that growing across the region.”