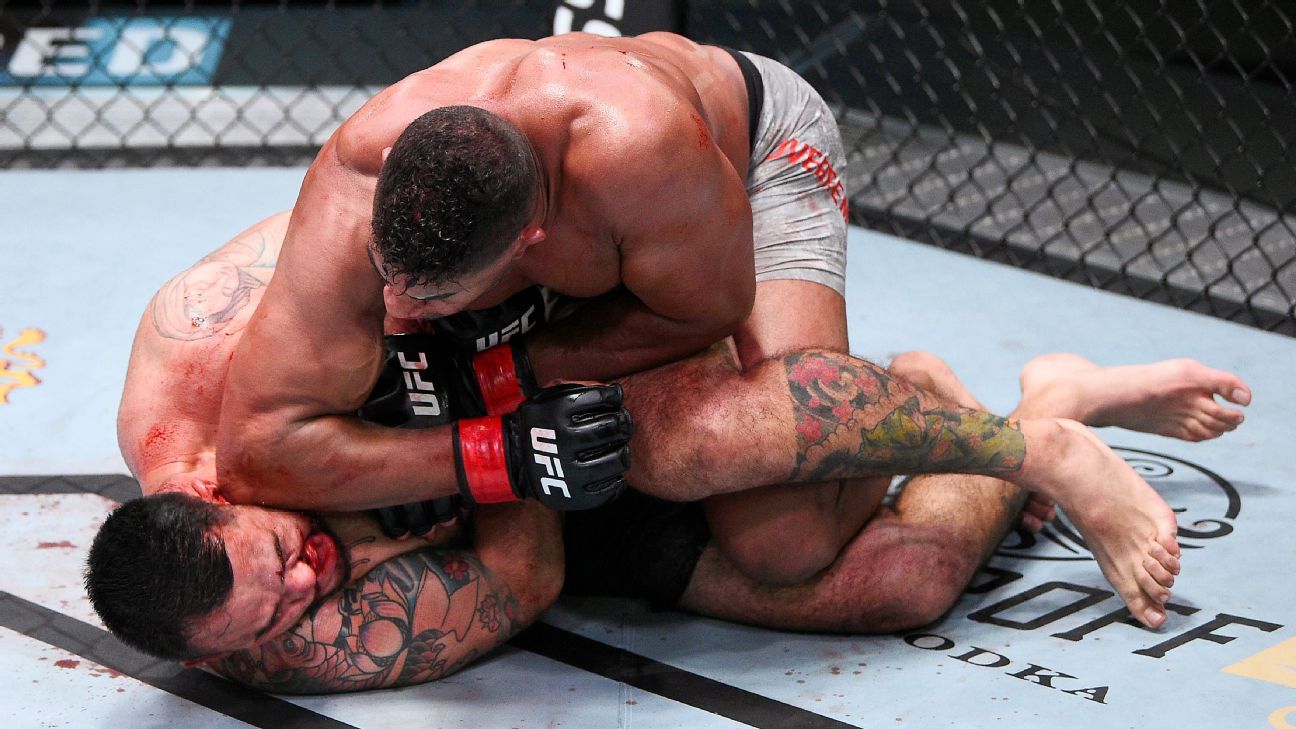 Overeem stopped up-and-comer Augusto Sakai early in the fifth round in the UFC Fight Night main event in Las Vegas. The win was the fourth in Overeem’s past five fights, keeping him in the hunt for the UFC heavyweight title that has eluded him.

Yes, time could be running out on the 40-year-old Overeem, but his experience helped him beat Sakai. In the final three rounds, Overeem, known for his kickboxing, used takedowns to control Sakai. Overeem used numerous elbows and hammer fists while in top position, and referee Herb Dean stopped the fight 26 seconds into the fifth round.

Overeem has recorded finishes in 42 of his 47 career wins. And speaking of finishes, several other fighters on the seven-fight card earned impressive ones as well.

What was the biggest takeaway from Alistair Overeem’s performance? Who’s next for him?

Helwani: That was a veteran, professional performance by Overeem, in what was his 66th pro MMA fight and 47th pro win. What a career for one of the greatest heavyweights of all time. And, worth noting, if not for a late fifth-round loss to Jairzinho Rozenstruik last December, he would be on a five-fight winning streak right now. Wild.

And you know what has always impressed me about Overeem? Despite being a legend with an incredible resume, he never picks and chooses opponents. He doesn’t consider himself to be above anyone, when in reality he would have every right to feel that way. I mean, just look at the names he fought recently: Sergei Pavlovich, Aleksei Oleinik, Rozenstruik, Walt Harris, Augusto Sakai. These are tough fighters, no doubt, but they aren’t exactly the biggest names in the division. But all he does is fight, and, more often than not, win. 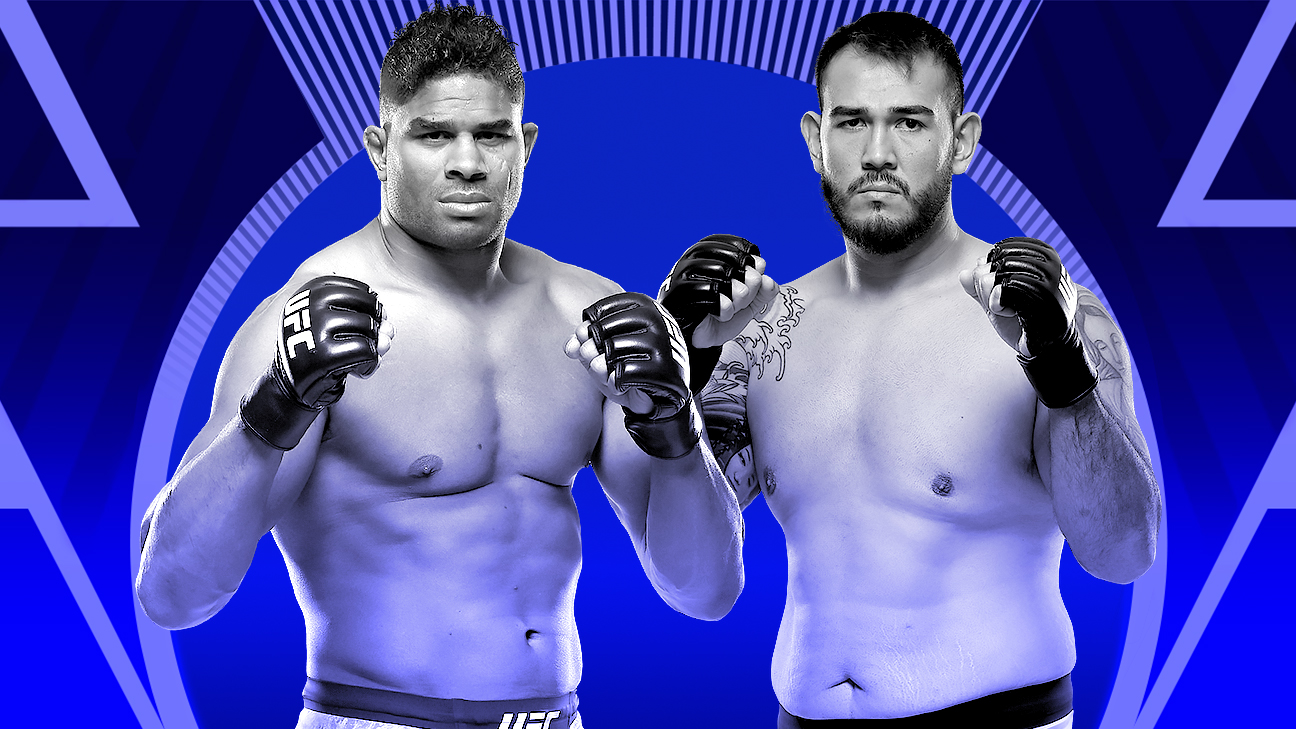 All fights from UFC Fight Night: Overeem vs. Sakai will be available to watch on ESPN+.

Watch the complete card on ESPN+

It’s incredible that he’s still doing this at 40 years old, and especially considering he started his pro career in 1999.

It’s easy to forget that not that long ago he lost two straight via stoppage and it seemed like we were all prepping for that uncomfortable “is it time for Overeem to hang ’em up” discussion. So much for that. He is still very much a player at heavyweight, and it’s nice to see.

One opponent idea I don’t like: Jon Jones. No thanks. If Jones isn’t fighting Brock Lesnar next, I think he should wait for the title shot. Too dangerous to put him in there against a veteran Overeem.

Is Michel Pereira finding the right balance between showman and fighter?

Wagenheim: Michel Pereira is an entertainer. That has not changed since the last time we saw him inside the Octagon or the time before that. But on Saturday night he showed just a smidge of discipline, a quality he will have to continue to develop if he is to be a horror show, not just a sideshow, for the UFC welterweight division.

Pereira’s performance was a masterwork. He outlanded Zelim Imadaev 88-23 overall and 39-7 in the final round. Pereira landed what he wanted to land whenever he wanted to land it, while absorbing practically no return fire. It was a matador vs. a bull. Imadaev, a former professional boxer, could not touch him. And Pereira knew it. As the fight wore on, the flashy Brazilian became bolder and bolder with his hands-down, chin-out antics. The key part: as the fight wore on.

That was about 14 backflips short of what I expected #UFCVegas9

What was most impressive about Pereira, to me, was that he started the fight in as buttoned down a style as we might reasonably expect from him. He didn’t go with the acrobatics until he had fully established that he was quicker, more elusive and far more dangerous than his Russian opponent. This needs to be a crucial part of Pereira’s approach moving forward, that and the killer instinct that enabled him to get the submission finish in a fight he was 21 seconds from settling for a lopsided decision win.

Imadaev has three fights in the UFC and lost them all. It’s only going to get more treacherous for Pereira. After the fight, he called out Jorge Masvidal. He’s not likely to get that fight, but if the matchmakers stick him in the Octagon with an opponent with a skill level even close to that of “Gamebred,” it’s going to require a lot of Pereira.

But that’s a future concern. For now, following two missteps in the last year — an upset defeat and a careless disqualification — Pereira is back to being a fighter the UFC and its fans can be excited about.

What are your thoughts on Brian Kelleher’s performance on Saturday and year so far?

Wagenheim: Brian Kelleher was the biggest betting favorite on the card, at -310. So one way to look at his submission victory over Ray Rodriguez is that Kelleher simply did what he was supposed to do. But nah, that would be a terribly myopic perspective.

Kelleher had a lot to overcome even before he stepped inside the cage. Originally, he was scheduled to face Ricky Simon. Then, a week before fight night, his opponent was pulled because of a cornerman’s COVID-19 test. Kelleher went a couple of days without knowing if he would be fighting at all, then was slotted against Kevin Natividad. That’s the fighter Kelleher faced off against at Friday’s weigh-ins, but before the day was over, he had a third opponent.

No one other than the UFC matchmakers had to do more adjusting during fight week.

Yet Kelleher maintained his focus. That became evident when it came time to step inside the Octagon. Kelleher wasted no time in engaging with Rodriguez, and when the UFC newcomer shot for a takedown, that was all Kelleher needed to make it a short night’s work. He clamped on a guillotine choke and got the tapout just 39 seconds into the fight.

It was Kelleher’s third victory of 2020 in his fourth fight of the year. He wants still another date in the cage, and why not?

Focused. Quick. Efficient. That was what Brian Kelleher brought to Saturday night.