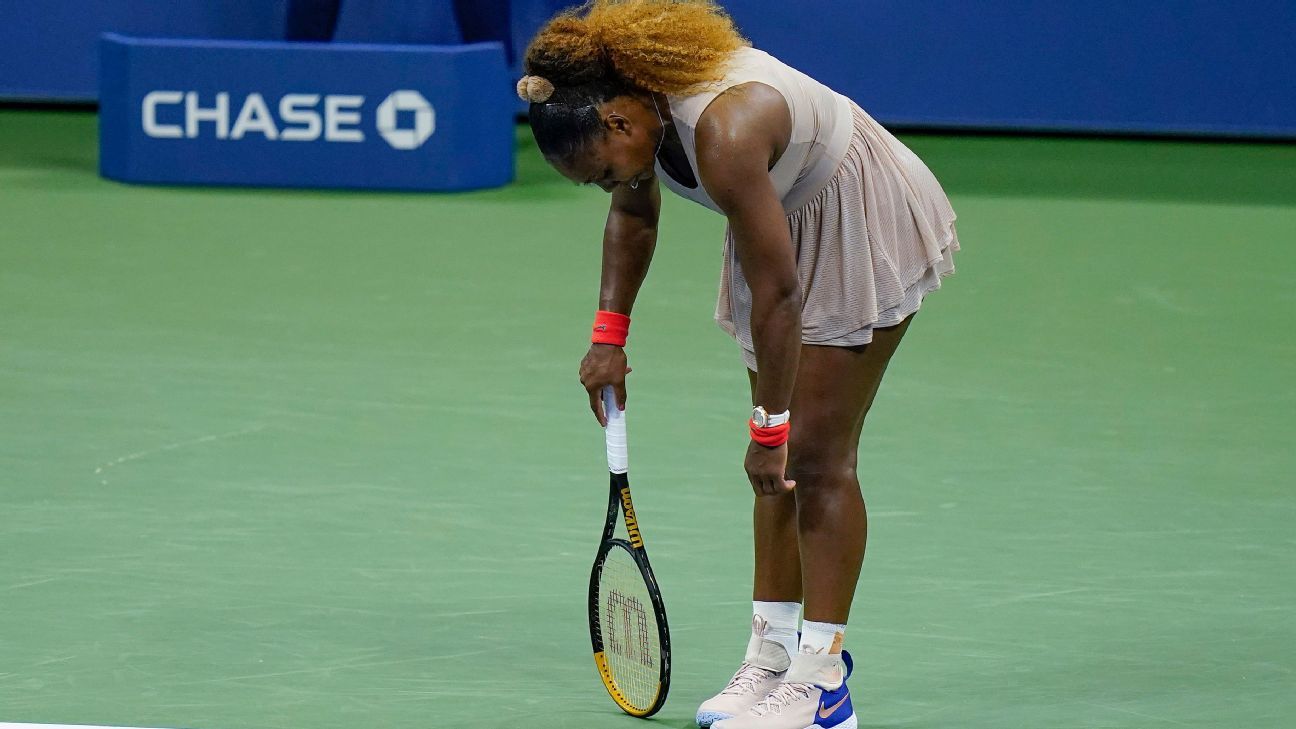 Serena Williams held onto the back of her legs as she bent over, wincing in pain on the court at Arthur Ashe Stadium on Thursday night.

She limped over to her seat, requesting a trainer to take a look at her left ankle. Her coach, Patrick Mouratoglou, and her longtime agent, Jill Smoller, stood from their seats with worried expressions. Her husband, Alexis Ohanian, was still and silent, staring at his wife. Her opponent, Victoria Azarenka, sat on the other side of the umpire’s chair with her eyes closed, so focused on the task at hand she didn’t show the slightest hint of irritation when a bug crawled on her nose.

It was the second game of the third set of their women’s semifinal clash at the US Open, locked at deuce. The momentum was very much on Azarenka’s side. She won the previous three games and rallied for a spectacular comeback to force a decider after losing the first set 6-1. After a sluggish start, Azarenka was suddenly in control of every point.

Even with a mask on — featuring her trademark “S” logo — the agony was evident on Williams’ face. The outcome seemed inevitable. Despite an impressive run during the US Open filled with aces, comebacks and mental fortitude, Williams would not be making history yet again.

Williams returned to the court with new tape wrapped around her ankle. She showed some fight but was ultimately ousted by her longtime friend — and foe — 1-6, 6-3, 6-3.

She had been so close. For much of the fortnight, it felt as if this would finally be the major where she would tie Margaret Court’s record of 24 Grand Slam titles.

“It’s obviously disappointing,” she said after the match. “At the same time, you know, I did what I could today. I feel like other times I’ve been close and I could have done better. Today, I felt like I gave a lot.”

Since returning after giving birth in September 2017, the 38-year-old has reached the final of four Grand Slams — twice at Wimbledon and at the previous two US Opens. Many wondered if the pressure had become too much, and the growing pleas of her fans were too overwhelming. She had lost all previous finals in straight sets despite powering her way the tournaments. When all eyes were on her, she was unable to play her dominant brand of tennis. As her time in the sport increasingly nears its end, naysayers question if she can reach the mark.

In this strange and tumultuous year, the conditions of no fans and limited distractions looked to benefit Williams. Six of the top 10 players in the world opted out of the tournament. Several of the top seeds suffered upset early upsets, and she managed to bounce back from slow starts to win three back-to-back three-set matches over Sloane Stephens, Maria Sakkari and Tsvetana Pironkova on her way to the semifinals.

During the first set Thursday night, Williams was doing everything right. She won 86% of points on her first serve, won three of her four break points and had 12 winners. The broadcast team said it was the best they had seen her look all tournament.

She was one set away from securing a rematch of the 2018 US Open title match against Naomi Osaka, who defeated Jennifer Brady 7-6 (1), 3-6, 6-3 earlier Thursday. It felt as if the stars were aligning for a dream final.

“I started really strong,” Williams said during her postmatch news conference. “Then she just kept fighting. She just changed and started playing better and better. Maybe I took a little too much off the gas pedal at some point.

Azarenka hadn’t won a match in over a year until coming to New York for the two-tournament bubble. Since the start of the Western & Southern Open, which she won after Osaka retired before their final, Azarenka has won 11 matches in a row. And now she’s in her first major final since the US Open in 2013, where she lost to Williams.

She will square off against Osaka on Saturday afternoon with both players seeking their third major title, and Williams will be left wondering what could have been and how close she was — again — to the record books.

Thankfully for Williams, she won’t have to wait long for another opportunity. She confirmed her intention to play the French Open, which begins later this month. Although she hasn’t won at Roland Garros since 2015, she is motivated.

“Obviously I’m never satisfied,” she said before the tournament began about her quest for No. 24. “That’s been the story of my career. So, yeah, it is what it is. I took a year and a half off for a baby. So I don’t know.