Joe Biden is pressing ahead with forming his government by announcing his picks for some of the top jobs in his economic team.

A number of his choices are set to make history – together they make up the country’s most diverse economic leadership team ever.

His picks include the first woman to head up the US Treasury, the first black person to deputise and the first women of colour leading the Office of Management and Budget and the Council of Economic Advisers.

The president-elect is also clearly keen to surround himself with heavyweights. Many of his nominees have decades of economic experience, in government, in academia and at America’s central bank.

The transition team said this team would help “lift America out of the current economic downturn and build back better”.

If confirmed, Janet Yellen will be the first woman to lead the Treasury Department in its nearly 232 year history.

She is a highly regarded economist having formerly chaired the US Federal Reserve and worked as a senior economic adviser to President Bill Clinton.

She led America’s central bank between 2014-2018 and served as vice chair before that. Markets rallied last week when it was first made clear last week she would be appointed.

She is widely credited with having helped lead America through the recession following the 2008 financial crash and has spoken about the need to address challenges ranging from inequality, financial exclusion and climate change.

Donald Trump broke with the tradition that usually sees presidents reappoint their predecessor’s choice to head up the Federal Reserve for a second term, hence Yellen only served one four year term at the bank.

Her breadth of experience and beliefs are likely to make her palatable to both progressive Democrats and Republicans. 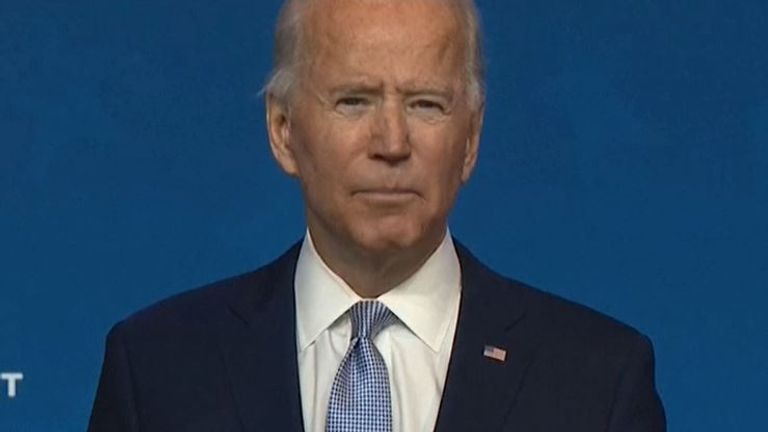 This will be the most diverse economics team in American history.

For the first time the Deputy Treasury Secretary will be black. Nigerian born Wally Adeyemo served in a number of economic advisory positions under Barack Obama and is currently the CEO of the not-for-profit Obama Foundation.

In addition to Janet Yellen there will also be three other women in senior positions, two of colour.

Neera Tanden, a former adviser to both Obama and Hillary Clinton and CEO of the liberal think tank Center for American Progress has been appointed to serve as Director of the Office of Management and Budget.

Cecilia Rouse, a labour economist and senior academic at Princeton University, is Biden’s pick to serve as the chair of the Council of Economic Advisers (CEA).

Both will be the first women of colour in their roles.

Ms Rouse has previously served on the CEA and earlier this year she organised a letter signed by 100 economists calling for more action to mitigate the effects of the COVID-19 pandemic.

Underneath her on the CEA, Biden has appointed Jared Bernstein and Heather Boushey. Both have distinguished economic backgrounds and both advised Biden during the presidential campaign.

Neera Tanden is the daughter of Indian immigrants and as well as being a longstanding Hillary Clinton ally, she served as a healthcare adviser to President Obama playing a role in formulating the Affordable Care Act – or ‘Obamacare’.

But her nomination to lead the US Budget Department has drawn criticism from both the left and the right.

This matters because her appointment needs Senate confirmation, and unless the Democrats can win two razor tight Senate runoffs in Georgia, it’s likely to be controlled by the Republicans.

Progressive Democrats don’t like her because she’s been an outspoken critic of key figures from that wing of the party including Bernie Sanders.

They see her politics as too far to the right, some have today circulated old tweets from her supporting, amongst other things, Donald Trump’s policies on social security.

While on the other side Republicans don’t like her because of her record of very public criticism and jibes aimed at their leaders.

A spokesman for one Senate Republican said she “stands zero chance of being confirmed”.

Confirming Ms Tanden in her position may be Biden’s first major test in the Senate.