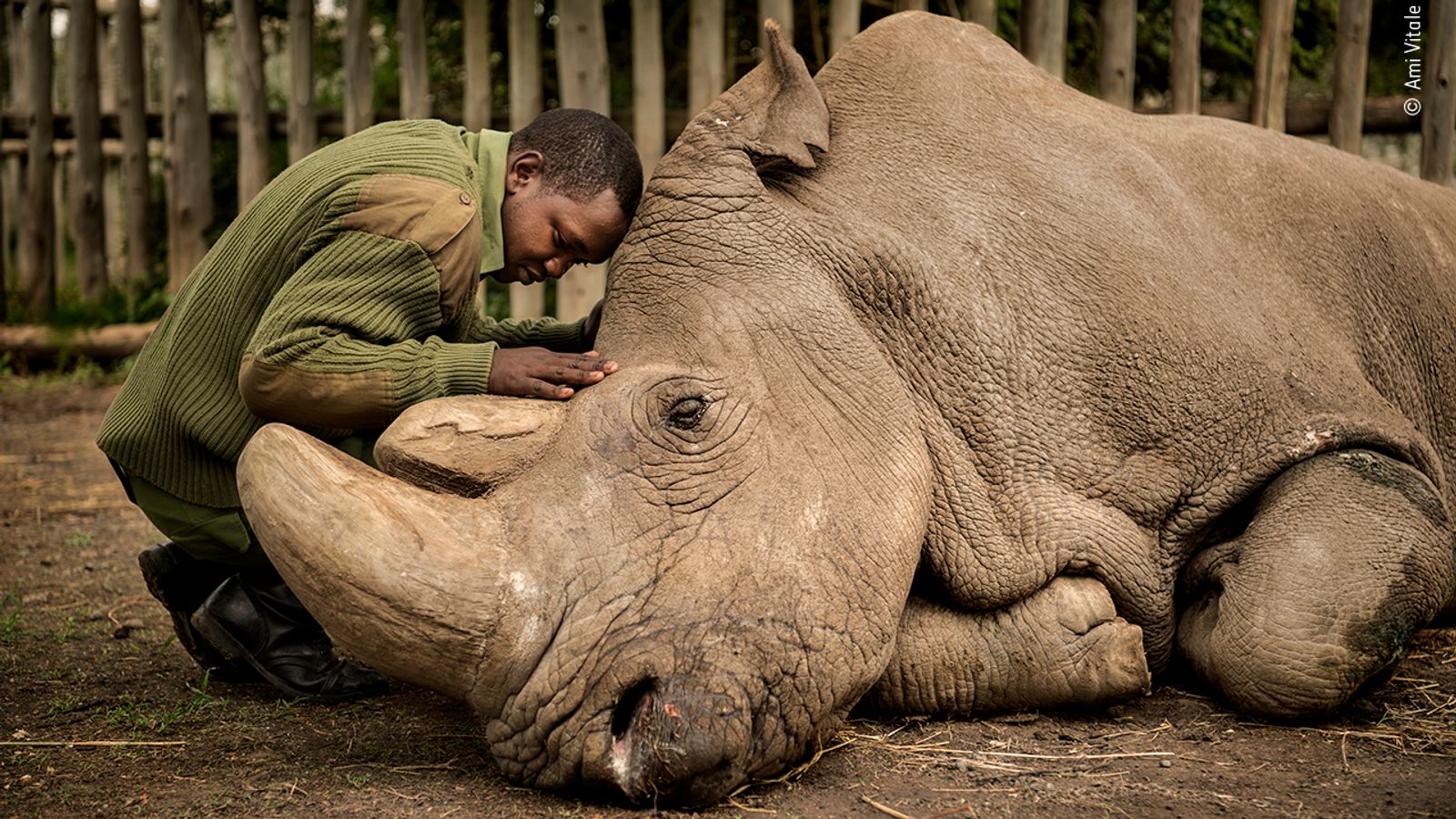 From comical snaps of a picture-perfect family of owls and a dog eyeballing a moose, to serious shots of a zebra head “trophy” and the heartbreaking moments leading up to the death of the last male northern white rhino left on the planet – these are some of the most striking images of wildlife taken in 2020.

While the winner of the Natural History Museum’s Wildlife Photographer Of The Year was crowned in October, voting is now open for the People’s Choice award, which is chosen by the public.

The image above is called The Last Goodbye, by US photographer Ami Vitale, and shows rhino Sudan being comforted in the moments before he died at the Ol Pejeta Wildlife Conservancy in northern Kenya in 2018. Aged 45, he was the last northern white rhino left in the world. Vitale says he hopes Sudan’s legacy will serve as a wake-up call to the reality of extinction.

Here are the other images that have made the shortlist, chosen by the museum from more than 49,000 entries from around the world.

Family Portrait by Andrew Lee, from the US

Sometimes it’s hard work getting all your subjects to smile for the camera at the same time, and these burrowing owls of Ontario, California, were no exception for Andrew Lee. Actually a family of 10, he managed to snap them all save for Dad, after several days of waiting. His patience paid off, with nine inquisitive faces all facing the lens head-on.

Eye To Eye by Andrey Shpatak, from Russia

This handsome face belongs to a Japanese warbonnet fish, snapped in the Sea of Japan. Living a territorial lifestyle among the rocks of shallow coastal waters, this species was once thought to be almost impossible to observe due to the fish’s timid nature. However, it seems they have found their courage and are now often brave enough to swim right up to divers – leading to striking images such as this one.

Licence To Kill by Britta Jaschinski, from Germany

Britta Jaschinski photographs items seized at airports and borders around the world, investigating why there is still a demand for wildlife products. Jaschinski says the hunter of this zebra, confiscated at a border point in the US, was probably unable to give proof that the animal had been killed with a licence. She used the shopping trolley to pose the question: wildlife or commodity?

Drawn And Quartered by Laurent Ballesta, from France

The sharks of Fakarava Atoll, French Polynesia, hunt in packs but tend to be selfish and do not share their prey, leading to a frenzied scramble for dinner. In Laurent Ballesta’s image, scraps of grouper flesh fall from the jaws of two grey reef sharks as they tear the fish apart – and the rest of the pack circles in hope.

Hare Ball by Andy Parkinson, from the UK

Andy Parkinson spent a long time in the cold, with winds of up to 60mph surging around him, watching the mountain hares near Tomatin in the Scottish Highlands. After five freezing weeks, he caught the perfect moment – a little female hare covered in a dusting of snow, curling her body into a perfect spherical shape.

Baby On The Rocks by Frederic Larrey, from France

This six-month-old snow leopard cub was usually following its mother, says photographer Frederic Larrey, so this image shows a rare moment as it sought protection alone among the rocks on the Tibetan Plateau. This is an uplifting photo of new life, with a healthy breeding population of snow leopards in the area – a somewhat rare place where the animals are free from persecution by hunters.

Close Encounter by Guillermo Esteves, from the US

Moose are large, imposing animals – so the worried look on this dog’s face is probably a fair reflection of how most people would react when coming face to face with those antlers. Taken on the side of the road at the Antelope Flats in Grand Teton National Park, Wyoming, this image shows the large bull taking an interest in the canine visitor – luckily with the windscreen between them.

Taken at the Mai Po Nature Reserve in Hong Kong, within the Frontier Closed Area on the Chinese border, this photograph came after years of studying tide tables and waiting for the perfect atmospheric weather conditions. Joseph Dominic Anthony said he wanted to convey the story and mood of the reserve in one single shot, juxtaposing the wildlife with the encroaching urban development behind.

The Real Garden Gnomes by Karine Aigner, from the US

Despite the fact Marco Island’s thriving community of Florida burrowing owls have a penchant for setting up resIdence on neatly mown lawns, photographer Karine Aigner says the area’s human residents are mostly happy to share the space with their feathered neighbours – making for comical images such as this one.

Only one is clearly visible, but this picture actually shows two Eurasian red squirrels finding shelter in a box set up by photographer Neil Anderson in a pine tree near his home in the Scottish Highlands. Using a wifi app on his phone, he was able take stills from the ground, leaving the squirrels to sleep in peace.

Backstage At The Circus by Kirsten Luce, from the US

In order to train a bear to walk on two feet, photographer Kirsten Luce says she was told they are chained by the neck to the wall when they are young to strengthen their leg muscles. This photo was taken at the Saint Petersburg State Circus, where the trainer performs his daily act with three Siberian brown bears.

Green sea turtles are classified as endangered, but at locations such as Little Farmer’s Cay in the Bahamas they are thriving thanks to an ecotourism project run by fishermen who use shellfish scraps to attract them to the dock. Photographer Thomas Peschak says he hopes the image provides a snapshot of the pristine population the world’s seas once housed.

In a striking image, a huge male lion lifts its head and stares at photographer Wim van den Heever. Sitting on top of a large granite rock on the open plains of the Serengeti, in Tanzania, the last rays of that day’s sunlight break through storm clouds to provide a dramatic backdrop.

This long-nosed dragon has positioned itself on a piece of wire mesh outside a workshop, where artificial light attracts moths and insects – an easy meal when you’re a hungry lizard. The picture was taken in the Great Sandy Desert in Western Australia, where the wildlife has had to adapt to harsh, hostile living conditions.

The Alpha by Mogens Trolle, from Denmark

Mandrill monkeys have been difficult to capture for primate photographer Mogens Trolle, so this image of an alpha observing his troop he says was particularly special. When a male becomes alpha he undergoes physical changes that accompany a rise in testosterone levels, resulting in the colours on his snout becoming even brighter – perfect for a beautiful image.

A Special Moment by Oliver Richter, from Germany

Oliver Richter has spent years observing the European beavers near his home in Saxony, Germany. This family portrait is set in a favourite feeding area and reflects the care and love the adults show towards their young, he says.

Shut The Front Door by Sam Sloss, from Italy/ US

Now, here’s an example of the wonder of nature – a coconut octopus carrying its home made of shells. These are small creatures that create protective shelters from the perfect tools, from shells to even bits of glass bottles, to hide themselves from both prey and predators. This picture was taken on the black sand of the Lembeh Strait, Sulawesi, Indonesia.

Peeping out from a bag in a small remote village in India, this cheeky Asian palm civet kitten demonstrates just how comfortable the creatures are in the company of the humans who live there. Photographer Pallavi Prasad Laveti says she sees the image as one of hope, as in other parts of the world the animals are not so free.

Visiting the Norwegian archipelago Svalbard, photographer Petri Pietilainen had hoped to see polar bears – but this sighting of one of the creatures making its way towards a steep cliff to capture nesting birds probably surpassed expectations.

Bushfire by Robert Irwin, from Australia

This bird’s eye view shows the devastating effect of a bushfire on woodland near the border of the Steve Irwin Wildlife Reserve in Cape York, Queensland, Australia. Home to many endangered species, fires are one of the biggest threats to the habitat.

A Window To Life by Sergio Marijuan Campuzano, from Spain

A cute image taken by Sergio Marijuan Campuzano shows Iberian lynx kittens Quijote and Queen playing in the abandoned hayloft where they were born in eastern Sierra Morena, Spain.

Losing The Fight by Aaron Gekoski, from the UK

As urban areas such as Jaen grow in Spain, threats to wildlife increase, and photographer Aaron Gekoski says Iberian lynx have become a casualty of road accidents in the area. In an attempt to stop the deaths, fencing is being improved and under-road tunnels have been constructed – providing a lifeline for many other creatures as well as lynx, Gekoski says.

Wildlife carer Julie Malherbe is a busy woman, taking a call to assist an animal rescue as she looks after three orphaned grey-headed flying foxes, also known as megabats. Native to Australia, these creatures are vital for dispersing seeds and pollinating scores of species of flowering and fruit-bearing trees. Sadly, they are listed as vulnerable to extinction because of the destruction of habitats and mass deaths caused by increasingly high temperatures.

Spirit Of Bhutan by Emmanuel Rondeau, from France

On assignment for WWF UK, Emmanuel Rondeau was tasked with capturing the elusive wildlife of the Bhutanese mountains. Surprised to find a rhododendron at an altitude of 3,500 metres (11,500ft), he installed a camera trap, hoping to snap animals using the path nearby. Returning many weeks later, he says he was amazed to find a head-on picture of a takin, with the blue sky, pink flowers and mustard-yellow coat of the animal perfectly complementing each other.

You can vote for our favourite image for the People’s Choice Award on the Natural History Museum website until 2 February 2021. The winner will be showcased in the annual Wildlife Photographer Of The Year exhibition at the museum until 4 July 2021