Helwani: This year has not been kind to many. It certainly wasn’t kind to Marvin Vettori early on.

But all’s well that ends well for the fiery Italian. 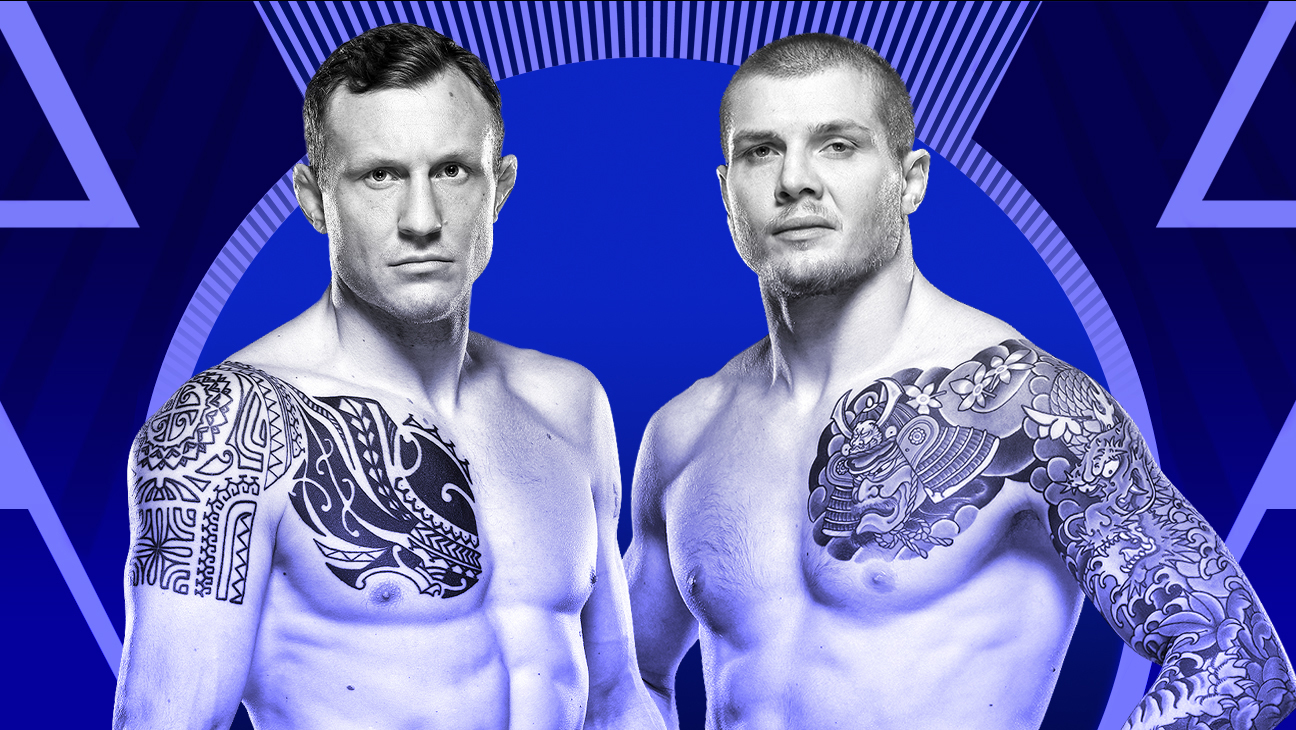 All fights from UFC Fight Night: Hermansson vs. Vettori will be available to watch on ESPN+.

Watch the complete card on ESPN+

First, his bout against Darren Stewart, scheduled for March 21, was canceled due to the pandemic. That was the first fight card scrapped due to COVID-19.

His next fight was booked for April 25 versus Karl Roberson, however, that was also canceled due to COVID.

That fight was then re-booked for May 13, but was scrapped a day before the fight after Roberson fell ill.

On top of all that, Vettori’s grandfather passed away this year, too.

The 27-year-old Vettori seemed upset. He seemed frustrated. He was extremely eager to prove that he’s a new face to look out for at 185, and he just couldn’t catch a break.

His first chance to prove that point came in June when he finally got his hands on Roberson. He won that fight via first-round submission.

That led to getting booked opposite former Strikeforce middleweight champion Jacare Souza on next weekend’s UFC 256 card, which would have been the highest-profile fight of Vettori’s career.

By now you probably know that fight got scrapped once Vettori took this main event spot against Jack Hermansson after Hermansson’s opponent, Kevin Holland, tested positive for COVID.

This was the spot he craved. This was the moment he strived for ever since he lost that split decision to Israel Adesanya in 2018.

And wouldn’t ya know it, “The Italian Dream” turned his 2020 nightmare into … a dream.

He closed out the year with the best win of his career. No doubt about that.

Truth be told, it looked like it would be another first-round finish for Vettori. He seemed awfully close to ending Hermansson with a little more ground-and-pound after dropping him midway through the round. But, a potentially ill-advised decision to go for a submission allowed Hermansson to escape and ultimately survive the round.

That may have been a small blessing in disguise because it allowed for Vettori to dig a little deeper and go 25 minutes for the first time in his UFC career.

They even made history, according to ESPN’s Stats & Info, because the 286 combined significant strikes in the main event were the most in middleweight history and second most at 185 or heavier, behind the 304 significant strikes between Daniel Cormier and Stipe Miocic at UFC 241.

At last, there can be no denying Vettori’s place among the 185 elite anymore. Vettori is for real and is a force to be reckoned with.

The best part about the win, at least for me? Vettori can stop talking about that Adesanya split-decision loss like it’s some kind of validation of his place in the division. He doesn’t need to bring it up anymore. Time to move on. He just beat Jack Hermansson, ESPN’s No. 6-ranked middleweight, and is now on to bigger and better.

Who, you might ask? Well, he called out Paulo Costa after the win (I think. All the bleeped-out expletives surrounding the callout made it hard to make out.)

I like that idea, though, Costa seems to have his heart set on Robert Whittaker, which is a fight I like a lot, as well, and might make more sense from a rankings perspective.

The winner of next week’s Holland vs. Souza fight would be an appropriate fight, especially if Holland wins, which would mean his 2020 record will be 5-0. Heck, Kelvin Gastelum, Derek Brunson and even Darren Till make sense next.

See, when you’re a new face in a division the options are a plenty. It’s a good spot to be in.

But Vettori can worry about all that next year. For now, la vita es bella for Italy’s Marvin Vettori.

The most impressive undefeated fighter was …

Okamoto: Man, these guys didn’t make this decision easy. Four fighters went into Saturday night’s fights undefeated. All four emerged the same way, and all four were extremely impressive in their own way. So, in order, from just very impressive to ridiculously impressive, I would list them as Roman Dolidze, Jordan Leavitt, Ilia Topuria and Jamahal Hill.

In the end, I couldn’t go in any direction other than Hill, considering who he did it to. Hill finished off Ovince Saint Preux via strikes in the second round, and even though there isn’t much excitement about Saint Preux — we know exactly who he is and isn’t at this stage of his career — he’s good, and he’s a legitimate test. And this was his 40th professional fight, 23rd in the UFC.

For Hill to not just beat him, but beat him convincingly, and establish range the way he did, fight as disciplined as he did … even though he was favored to win, it was an eye-opener. He’s only been fighting professionally since 2017. This was a highly composed, nuanced effort from him.

I still considered ranking Topuria’s knockout of Damon Jackson (another veteran) higher, it was that pretty and somewhat unexpected from a talented grappler, but ultimately, you can’t deny what Hill did on Saturday. I did not see such a thorough performance coming from him in this fight.

Raimondi: Jordan Leavitt unleashed a hellacious slam knockout of Matt Wiman that put Wiman to sleep on impact. Wiman’s head bounced off the canvas. Leavitt used his right arm to really drive Wiman’s head and neck into the mat. It was a visceral sight. Wiman was twitching briefly immediately after the slam, though he eventually was able to leave under his own power. No one wants to see stuff like that, but the argument that slams — or even a certain kind of slam — should be illegal is invalid.

First off, slam knockouts happen very infrequently — just 12 times in the 27-year history of the UFC. Secondly, almost every single one of those slams was a counter to what the other person was doing. In this case, Wiman jumped guard and wrapped his legs around Leavitt’s waist. At any time, Wiman could have released that position and got his feet under him. But he chose not to — and faced the consequences. And that’s just what this sport is, right? It’s dangerous. Knees and shins to the head are perfectly legal and happen in almost every fight.

Why didn’t he just put his feet On The ground

If you take away the ability to slam, that would mean more fighters jumping guard or holding onto submissions too long, like how Rose Namajunas did when she was slammed and knocked out by Jessica Andrade in their strawweight title fight at UFC 237. Namajunas could have released her kimura submission grip at any time and protected herself. But she chose not to, and that cost her the crown. A slam is an effective counter to those techniques. And the threat of a slam knockout is enough to act as its own deterrent, hence it only happens about once every two years or so.

Dominick Cruz made a good point on the broadcast, though. He said strikes to the back of the head are illegal, so why would slamming someone on the back of his or her head be legal? That’s fair, and Cruz has expertise. But again, the onus is on the fighters to not put themselves in vulnerable positions. It’s a fight, after all. “Protect yourself at all times” is a real thing. Spikes or piledrivers — when a fighter drives his opponent’s head into the canvas when the opponent has no control — are illegal, as they should be. But slams? Quinton “Rampage” Jackson‘s slam of Ricardo Arona is one of the most iconic finishes in MMA history. How many things can we take away before an MMA fight ceases to be a legitimate fight? This isn’t Brazilian jiu-jitsu. Slams should stay. And fighters like Wiman should be wary of protecting themselves in those positions.

Wagenheim: MMA is the concussion business. We might not want to acknowledge that, because it can douse our fandom with a cold shower of harsh reality. But this is a sport where the goal is to damage an opponent, with the biggest bull’s-eye typically affixed on the opponent’s head.

Knockouts are riveting. Knockouts are revolting. I know a lot of lifelong sports fans who can’t bring themselves to watch MMA, and its combat cousin, boxing, especially at a time when games like football are taking measures to lessen the violence. Even those of us who watch fights every weekend can feel conflicted. Sometimes a finish makes the heart go thump-THUMP. Sometimes a finish brings a queasy feeling to the stomach.

Jordan Leavitt’s slam KO of Matt Wiman did a little of both for me. Leavitt showed maturity beyond what might be expected of a fighter making his UFC debut. Wiman, who had made 17 previous trips inside the Octagon, inexplicably put himself in jeopardy. That’s where the conflict lies. Wiman was partially responsible for the slam that rendered him unconscious.

Nonetheless, a sport that bans strikes to the back of the head simply cannot allow a maneuver that targets that area of the body in a manner far more dangerous than a typical punch does. Leavitt used his forearm to immobilize Wiman’s head, which made the slam gruesomely impactful, more so than many of the punches that draw rebukes from referees. But even a different type of slam endangering the back of the head, such as the one Jessica Andrade used last year to dethrone Rose Namajunas, is too dangerous for this sport.

Go ahead and accuse me of trying to turn MMA into touch football. And don’t ask me to draw the line at the precise point where competition veers too far into brutality. But those who set the rules need to address the most dangerous aspects of this sport with common sense and consistency before someone felled by a concussive finish does not get back up.