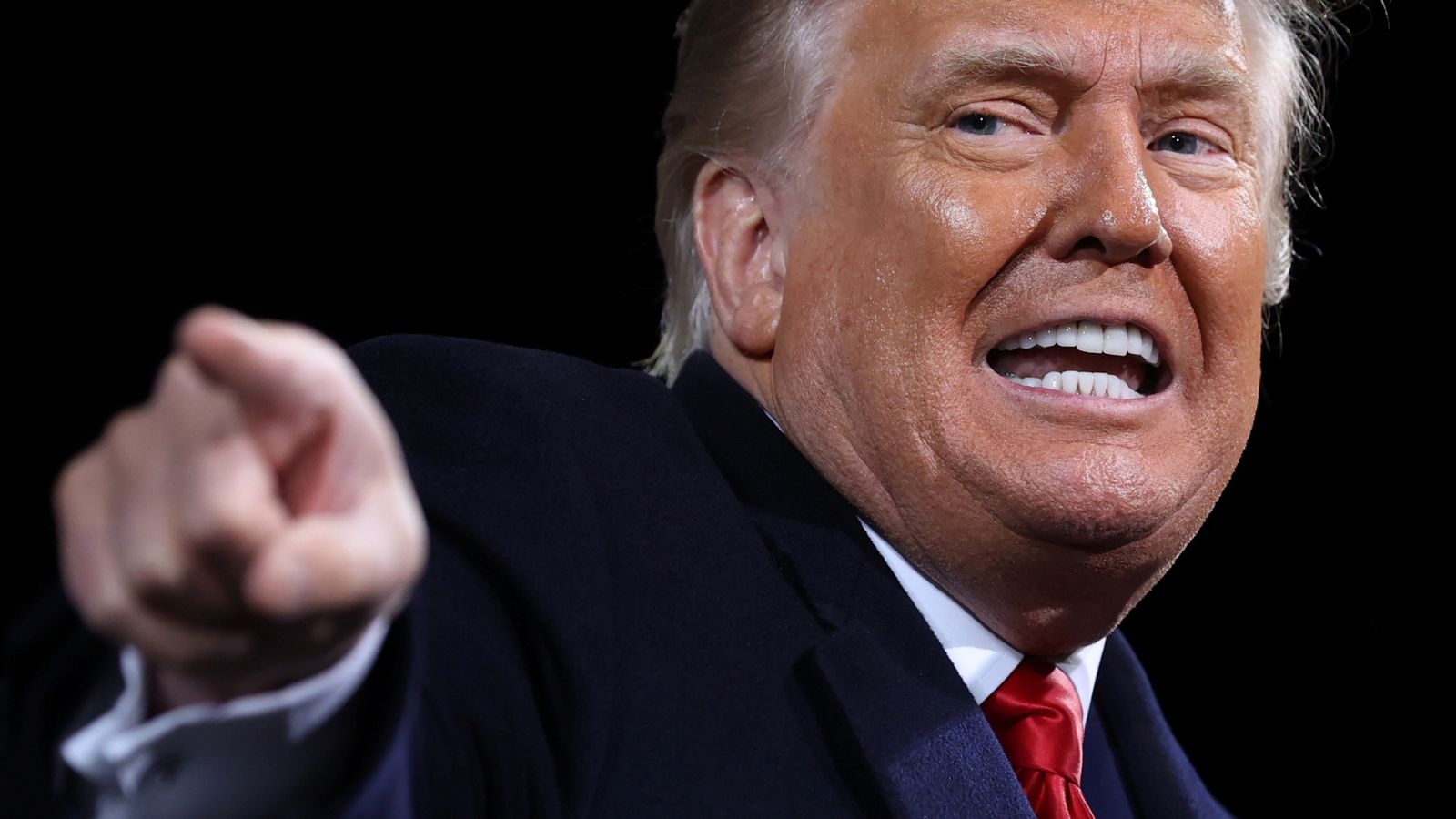 Donald Trump won the 2020 election and anyone who says otherwise is wrong – at least that is the belief among supporters who turned out to cheer for him at a rally in Georgia.

“Four more years!” they chanted at an airfield on the outskirts of the city of Valdosta.

To the sound of music and shouts, the president and first lady walked out on to a raised platform, flanked by a wall of well-wishers, many of them wearing red Make America Great Again caps and waving posters.

“They cheated and they rigged our presidential election but we will still win it,” Mr Trump said.

It was his first rally since election day on 3 November – a vote the Republican incumbent lost to his Democratic rival Joe Biden.

Yet it’s a defeat the several thousand men and women at the airfield – most of them without face masks and with no social distancing – refused to recognise.

Instead they appeared convinced that the election was stolen from them.

The gathering was even called a victory rally.

Many cite as proof a surveillance video that the Trump campaign claims shows secret “suitcases” of ballots being counted on election night without observers at a site in Georgia, even though it has been dismissed by Republican election officials.

President Trump shared the footage during the rally, drawing boos from the crowds as they turned on the media in a cordoned off area for – as they see it – failing to report the true story of the election.

A man brandishing the slogan “Stop The Steal” on a cardboard poster, who gave his name as Steve, told me: “I think the fraud is in your face. There is a tremendous amount of evidence and the people who are saying there is no evidence are not even looking.”

He added: “I want to send a message to support Donald Trump because we love Donald Trump and to help stop the steal of the election of our freedoms and our country.”

A second man called Keith used the Star Wars character Obi-Wan Kenobi, who is killed by Darth Vader, but returns as a more powerful force, to describe what he thinks will happen to the president if he does not serve a second term.

“He’s going to be more powerful in defeat than in the actual Oval Office,” he said.

“I know Donald Trump is a fighter. We support Donald Trump because he supports the American people and that is why we are supporting him now. We are going to back our president.”

Despite his anger at what he sees as fraudulent election results, Mr Trump urged his supporters to take part in a crucial run-off vote next month for Georgia’s two seats in the Senate.

If the Republicans fail to hold on to them, the balance of power in the upper chamber will shift to the Democrats, in a move that would enable Mr Biden to push on with his agenda and challenge Mr Trump’s legacy without becoming embroiled in bipartisan wrangling.

Yet for Mr Trump’s fans at the airfield, it is impossible to conceive of such an eventuality because they think he will serve a second term.

One man, dressed in the red, white and blue of the American flag and calling himself “Uncle Sam”, said: “He [Mr Trump] is our chief executive, he is our commander in chief. He is going to defend the Republic. Joe Biden did not win and he will not win.”

The election results would suggest otherwise.

In fact the state of Georgia voted Democrat for the first time since 1992.

Down the road from the rally, in the city centre, the mood is far more about Christmas cheer than election fever.

Marley Atkinson, 30, a mother who was out with her two young children, said she was not impressed by Mr Trump’s claims of fraud.

“I feel he is just acting like my toddler when he didn’t get his way and now he’s upset about it and that is just ruining any chance of me voting for him in future elections,” she said.