The fight against COVID-19 has taken a historic leap forward after the Pfizer/BioNtech vaccine was given to someone outside a clinical trial for the first time.

Grandmother-of-four Margaret Keenan, 90, has become the first person in the world to receive the jab as part of a vaccination programme.

Mrs Keenan, who has lived in Coventry for six decades but is originally from Eniniskillen, Northern Ireland, was given the vaccine by nurse May Parsons at the city’s University Hospital at 6.31am.

She said being the first was “a privilege” and “the best early birthday present I could wish for” as it would mean she could spend time with her family and friends in the New Year “after being on my own for most of the year”.

She thanked Ms Parsons and the NHS staff for looking after her “tremendously”.

And added: “My advice to anyone offered the vaccine is to take it – if I can have it at 90 then you can have it too!”

Mrs Keenan, who worked as a jewellery shop assistant until only four years ago, will receive a booster jab in 21 days to ensure she has the best chance of being protected against the virus.

The UK became the first country in the world to approve the Pfizer vaccine last week.

At the weekend it began arriving in batches at a hospital in south London ahead of the UK-wide rollout.

Vaccinations will be given at dozens of hospital hubs from today – called “V-Day” by Health Secretary Matt Hancock – with people aged 80 and over and care home workers among the first to receive the jab.

Nurse Ms Parsons said it was a “huge honour” to be the first in the country to deliver the vaccine to a patient.

She added: “The last few months have been tough for all of us working in the NHS, but now it feels like there is light at the end of the tunnel.”

Mrs Parsons, originally from the Philippines, has worked in the NHS for the last 24 years and been at University Hospitals Coventry and Warwickshire since 2003.

The government has secured 40 million doses of the vaccine, which needs to be refrigerated at -70C (-94F). Studies have shown the Pfizer/BioNTech jab is 95% effective in preventing COVID-19 and works in all age groups.

The UK could have up to four million vaccine doses by the end of December, NHS Providers has told Sky News. Around 800,000 doses arrived in the first batch.

NHS England medical director Stephen Powis said on Sunday that beginning COVID vaccinations “feels like the beginning of the end“, but warned the campaign will be a “marathon, not a sprint”.

After the UK licenced the vaccine last week, the pace of the Medicines and Healthcare Products Regulatory Agency (MHRA) regulatory approval process has attracted some criticism, with suggestions it was putting speed over winning public confidence. 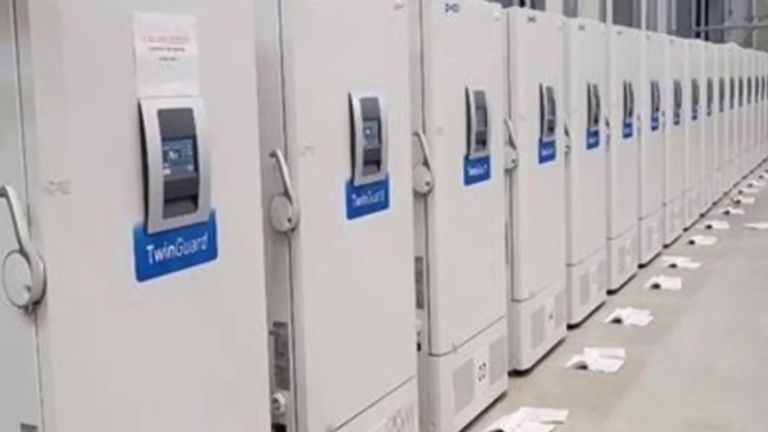 Vaccine marks ‘the beginning of the end’

Dr Anthony Fauci, the director of the US National Institute of Allergy and Infectious Diseases, criticised the regulators that proceeded “quickly” and “superficially”, saying that the US had “the gold standard of a regulatory approach.” By comparison, he said: “The UK did not do it as carefully.”

He later apologised and said his comments about the UK’s approval were “taken out of context”.

The MHRA’s fast approval also came under fire by the European Medicines Agency (EMA), which suggested that its slower approach was more likely to win over public confidence.

Alongside the vaccine rollout today, the government has published a report highlighting the work and achievements of its Vaccines Taskforce (VTF).

Boris Johnson said: “The approval of the Pfizer-BioNTech vaccine for use in the UK marks a momentous step in our fight against COVID-19.

“But we still have some way to go and everyone needs to keep following the rules to keep the virus under control.”

The highly-anticipated vaccine rollout this week comes after more than 61,000 deaths from a virus that has ravaged the UK as well as the rest of the world – with more than 1.5 million fatalities recorded globally.