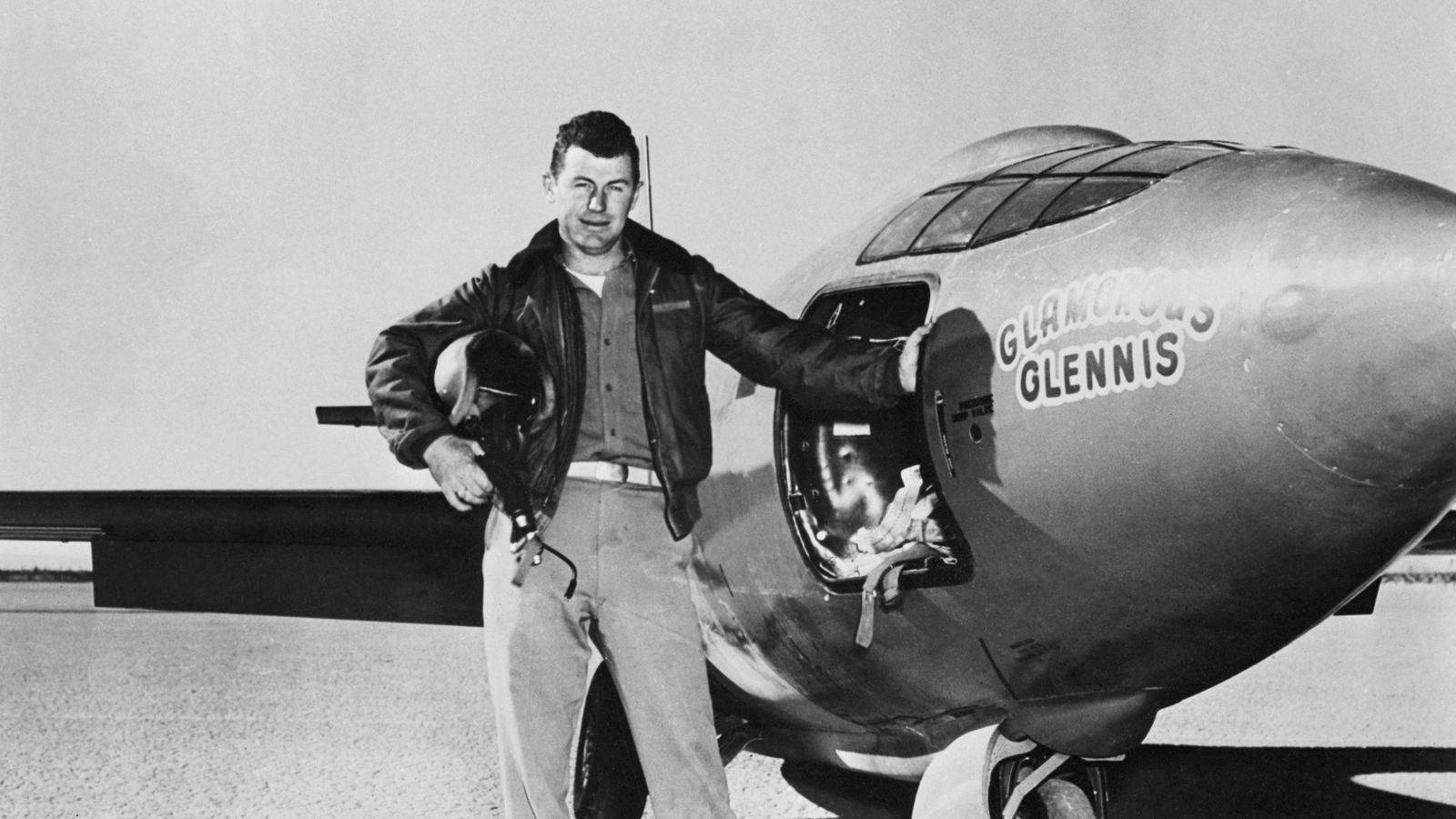 Chuck Yeager, the first pilot to break the sound barrier, has died aged 97.

The US World War Two fighter pilot’s exploits were told in Tom Wolfe’s book “The Right Stuff” and the 1983 film it inspired.

Retired Air Force Brigadier General Charles “Chuck” Yeager was a 24-year-old captain when he flew a Bell X-1 rocket plane faster than 660mph to break the sound barrier on 14 October 1947.

He later said the plane could have gone faster if it had carried more fuel.

“When you’re fooling around with something you don’t know much about, there has to be apprehension. But you don’t let that affect your job.”

Yeager nicknamed the rocket plane and all his other aircraft “Glamorous Glennis” for his wife who died in 1990.

His feat was kept top secret for about a year when the world thought the British had broken the sound barrier first.

The pilot commemorated the achievement sixty-five years later to the minute on 14 October 2012, when he flew in the back seat of an F-15 Eagle as it broke the sound barrier at more than 30,000 feet above California’s Mojave Desert.

Yeager, who was born in the small town of Myra in West Virginia in February 1923, enlisted in the Army Air Corps after graduating from high school in 1941.

He later regretted that his lack of a college education prevented him from becoming an astronaut.

Yeager started off as an aircraft mechanic and, despite becoming severely airsick during his first airplane ride, signed up for a programme that allowed enlisted men to become pilots.

He shot down 13 German planes on 64 missions during World War Two, including five on a single mission.

Yeager was once shot down over German-held France but escaped with the help of French partisans.

He became a test pilot beginning at Wright-Patterson Air Force Base in Dayton, Ohio, after the war.

Yeager returned to combat during the Vietnam War, flying several missions a month in twin-engine B-57 Canberras making bombing and strafing runs over South Vietnam.

He also received the Presidential Medal of Freedom in 1985.

Yeager had retired from the Air Force in 1975 and moved to a ranch in Cedar Ridge, Northern California, where he continued working as a consultant to the Air Force and Northrop Corp.

The pilot and his first wife Glennis Yeager had four children before her death from ovarian cancer.