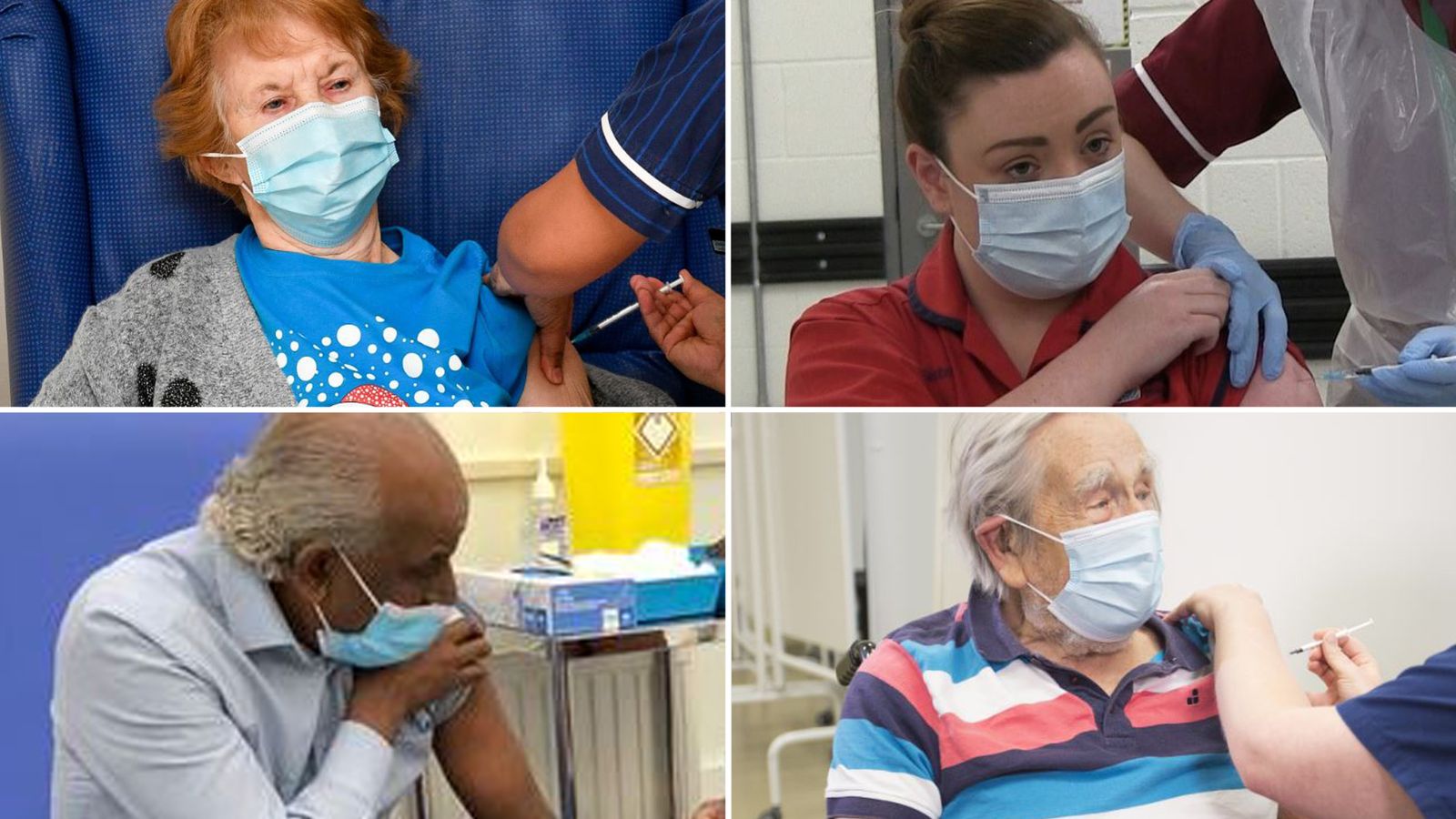 They are the history makers – the first people in the UK and the world to receive the Pfizer/BioNTech vaccine outside a clinical trial.

People aged over 80, as well as care home workers and NHS staff, have been given the first batches as the mass vaccination programme is rolled out nationwide. So who are they and what did they say after having the COVID-19 jab? 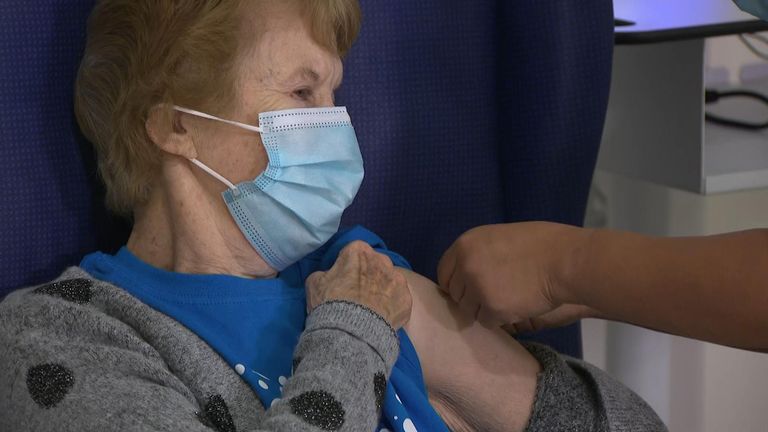 The grandmother, who turns 91 next week, was the very first person to have the vaccine on Tuesday morning, after receiving it from nurse May Parsons at University Hospital in Coventry.

Known to family and friends as Maggie, Mrs Keenan, who has a daughter, a son and four grandchildren, said: “I feel so privileged to be the first person vaccinated against COVID-19.”

She also said: “It’s the best early birthday present I could wish for because it means I can finally look forward to spending time with my family and friends in the new year after being on my own for most of the year.” 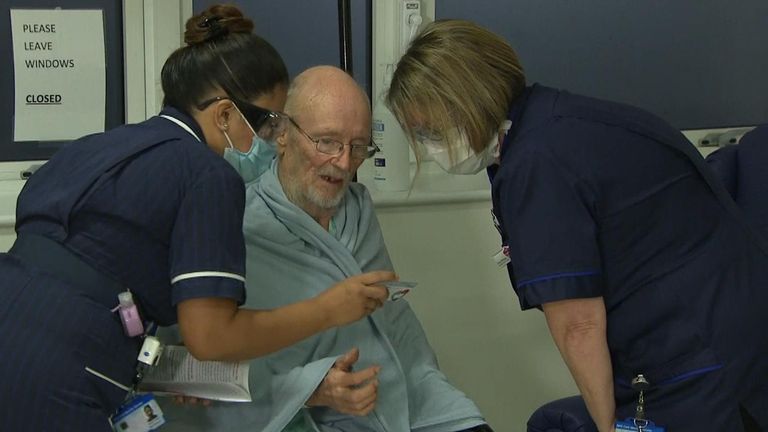 Mr Shakespeare, 81, was the first man to receive the vaccine

The second patient – and the first male – to receive the vaccine was a man called William Shakespeare, who just like his famous literary namesake, was from Warwickshire.

In a world when people hardly ever remember who came second, Mr Shakespeare might just tip the balance.

Mr Shakespeare, 81, who was also vaccinated in Coventry, said he was “pleased” to be given the jab.

“I need to say, the staff at this hospital are wonderful,” he added.

Later in the Commons, Mr Hancock quoted The Merchant of Venice, in a nod to Mr Shakespeare.

The health secretary said: “Well, this year I’ve sometimes turned for inspiration to the Bard, when they prick us do we not bleed?

“It was a delight and a coincidence to find that Mr William Shakespeare of Stratford-upon-Avon, a constituent of the vaccine rollout minister (Nadhim Zahawi) – by coincidence, don’t get any ideas – was called forward to be the second person to be vaccinated by the NHS.” 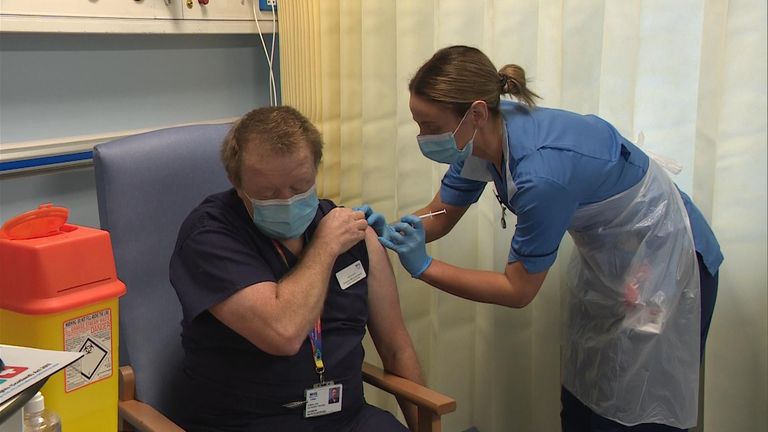 NHS worker first person in Scotland to get jab

In Scotland, Mr Mencnarowski, a clinical lead at NHS Lothian, was among the first in line to be vaccinated at the Western General Hospital in Edinburgh. He said he felt “very proud and excited to be part of it all”.

Mr Mencnarowski paid tribute to the staff in his department, saying they have gone “the extra mile” throughout the crisis. He will now go on to vaccinate others.

Among the first care home workers to be protected with the vaccination – and Wales’ “Patient A” – was Craig Atkins from Ebbw Vale.

Mr Atkins, a maintenance worker at BankHouse Care Home, said the past nine months had been difficult – but he was doing this for the home.

He said: “It was nerve-wracking. But this is for the residents.”

Over in Belfast, Joanna Sloan, a deputy sister at the Royal Victoria Hospital, became the first person on the island of Ireland to receive the vaccine.

She is the sister in charge of COVID vaccination for the Belfast Health and Social Care Trust, Northern Ireland’s largest.

The 28-year-old mother-of-one from Dundrum, County Down, had her wedding postponed because of the pandemic.

Ms Sloan received the jab at the Royal Victoria Hospital and described it as “a momentous day”.

As the vaccine was administered, she said she was thinking: “At last – we are here.”

Ms Sloan added: “Through everything that healthcare workers (went through), either in hospital or (the) community – people themselves losing family members, us losing colleagues – it felt like it was a huge moment and that this was and could possibly be the final hurdle in the fight against COVID.”

She is a former emergency department nurse and has been in her job for six years.

At the age of just 16 in 1938, and subsequently into the war, the now 98-year-old great grandfather worked with the Air Force taxiing planes – but described the day as one of his most exciting.

Asked if he was worried about COVID-19, he said: “I worry more about my family than me. When the doctor asked me to have the vaccine I said ‘yes’ to help advertise it.

“I don’t think I may ever live a normal life again… but I live in hope that by the middle of next year, we might be living a normal life. It is an exciting day.”

Mr Dyer, 90, was the first person in London to get the vaccine as part of the national rollout.

The hospital volunteer told Sky News: “I’m pleased to have it actually.

“When they suggested that they’re going to vaccinate everyone I thought ‘ooh that’s a good idea’.

“I have met some people that are utterly opposed to it and I can’t understand why.”

He added: “I feel very honoured actually to think I’ve had the vaccination and it’s not cost me any money.”

Mr Dyer said he is looking forward to seeing his son, and thanked the scientists for developing the jab, saying we’re in a debt we can never repay.

The 61-year-old care home nurse had the Pfizer jab in Croydon to set a good example to his colleagues, some of whom are anxious about taking the vaccine.

He said: “When I was told yesterday that I would be one of the first few ones to get the jab, I was thinking how proud of myself and how privileged I am.”

Prime Minister Boris Johnson visited the vaccination centre at Guy’s Hospital in London on Tuesday morning to meet some of the first people there to receive the vaccine.

Lyn Wheeler, 81, from Bromley, was the first patient to be given the injection there and was vaccinated in front of Mr Johnson.

When he asked her how it had been, she said: “It’s all for Britain.”

She urged people to have the jab, adding: “I’m going for it because I feel there’s no other way forward, we can’t keep sitting in our houses.”

Dr Shukla said of the vaccination that he “felt very comfortable” and “did not feel anything”.

He added: “I felt very proud. It was a great privilege to participate in this very important activity.

“I don’t take this for granted – there are hundreds of people who have worked day and night for this vaccination.

“The whole world is looking to us to how this goes. I’m very grateful for our wonderful health service – it is the best in the world.”

They were the first people in Milton Keynes and the first couple in the UK to get the jab, away from trial conditions.

Speaking to Sky News, Mrs Simper said: “If I can convince other people to have it done to keep us safe as we are keeping them safe then that’s good – because a choice between COVID-19 or the injection, give me the injection every time.”

She added: “I’m relieved to be getting it done.”

Mrs Simper also said she was hoping to hug her grandchildren and great grandchild in a few months.

In Sheffield, Mr Moore, 82, was among the first in the city to get the jab.

He described the emergence of the vaccine as “like winning the pools… knowing that by maybe May time, we might be back to normal – great isn’t it?”

Mr Moore, who was vaccinated alongside his wife Janet, says he didn’t mind staying in over lockdown, declaring his partner as the “best cook on the planet”.

Mrs Moore says it’s “fantastic” and had the jab in between other appointments, adding: “I think it’s exciting!”

Mr Moore says he is looking forward getting back behind the wheel of his car, while his wife is excited to be seeing family again.

After getting the vaccine in Newcastle, the nurse said: “It feels like I’ve had the golden ticket at Willy Wonka’s chocolate factory.”

The 68-year-old had a heart attack 10 years ago and has worked part-time since coming back to work – she’s carried on throughout COVID in the eye department at the city’s Royal Victoria Infirmary.

She told Sky News: “I feel so relieved now, I’ll be back for my booster in a few weeks but this is the start of winning some freedom back.

“They saved my life with the heart attack and this is the start of another exciting time.”

The care home worker told Sky News she was “positive, happy and relieved” after receiving the jab.

“I haven’t touched or hugged my mum since March,” said Ms Duggan, a chef at a care home in South Wales.

“It’s been horrible,” she added.

The 47-year-old is tested for COVID-19 every week and was among 300 getting their first dose of the vaccine at Cwmbran Stadium on Tuesday.

“I feel positive. I’m happy and relieved. Everybody has had it tough. It’s nice to have some peace of mind. I just want everything to be normal.”

The couple, both 84, were visiting a clinic at the University Hospital Coventry and were asked at 10.30am if they would like to receive the vaccine on Tuesday.

The pair, who have been married for 65 years, told Sky News they didn’t think they would be vaccinated before Christmas.

The Gortons added they have found the pandemic “very grim” and had to cancel their holidays.