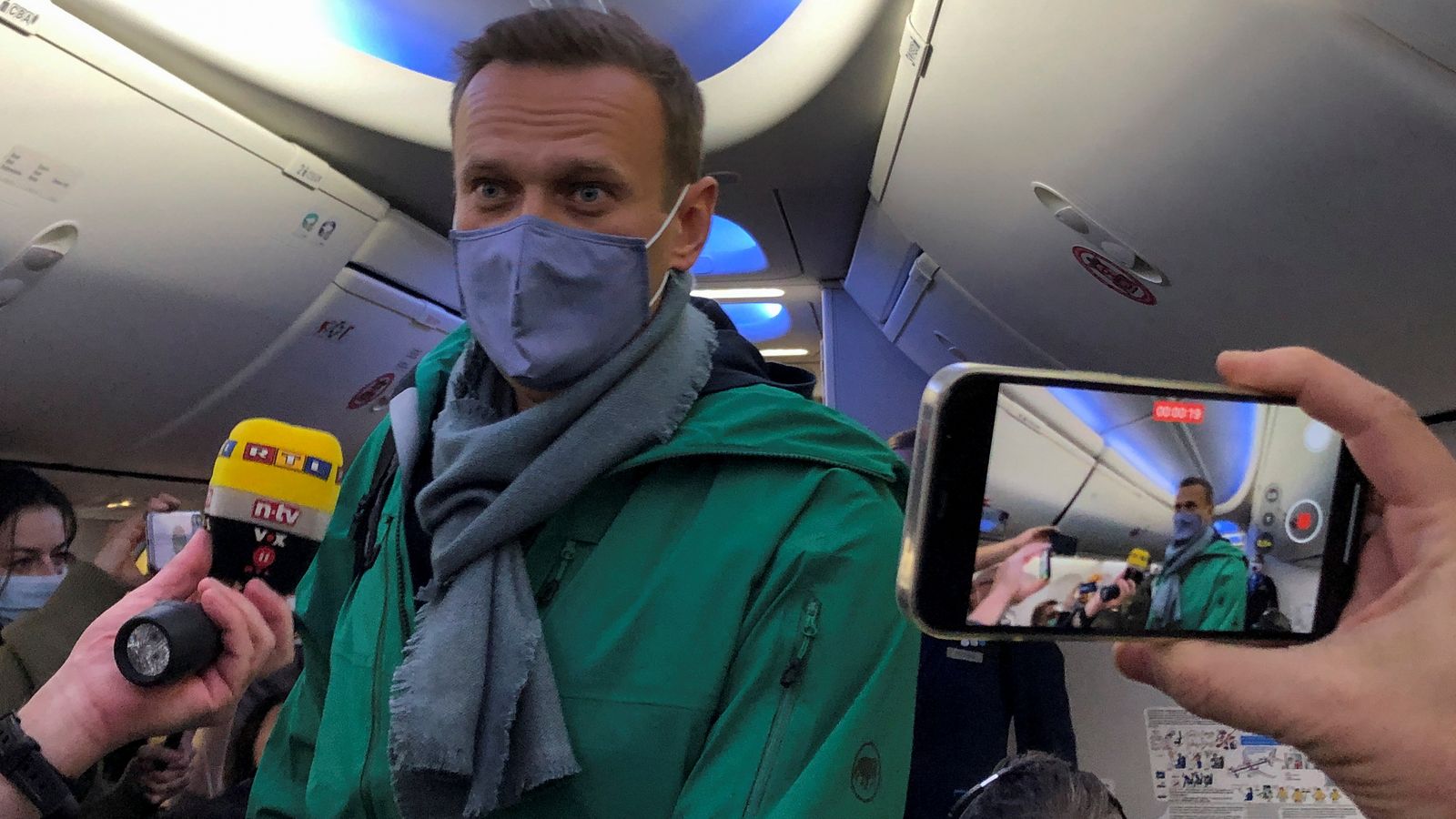 Poisoned Putin critic Alexei Navalny has arrived in Russia, where he faces the threat of arrest.

The Russian dissident flew back from Germany where he had been recovering after being exposed to the Soviet-era novichok nerve agent in August.

The plane he was travelling on had been scheduled to land at Moscow’s Vnukovo airport but it was later diverted to the city’s Sheremetyevo airport.

Hundreds of his supporters had gone to Vnukovo airport to meet him.

Police detained several people at Vnukovo and cleared a crowd out of the terminal. Supporters chanted “Russia will be free!” and “Navalny! Navalny!”.

Earlier, after boarding the aircraft in Berlin on Sunday, he told reporters: “This is the best moment in the last five months. I feel great. Finally, I’m returning to my home town.”

He said he did not think he would be arrested, calling himself an innocent person.

“What do I need to be afraid of? What bad thing can happen to me in Russia?” he added. “I feel like a citizen of Russia who has every right to return.”

The 44-year-old had said on Instagram: “It was never a question of whether to return or not. Simply because I never left.

“I ended up in Germany after arriving in an intensive care box for one reason: They tried to kill me.”

Mr Navalny fell ill on a flight to Moscow from the Siberian city of Tomsk last summer but Russia has consistently denied involvement in the poisoning of Mr Navalny and has said it has seen no evidence that he was poisoned.

He is now on the Federal Wanted List and is implicated in a number of criminal and administrative cases which give law enforcement broad scope to keep him under prolonged investigation.

This would most likely mean he is not around for September’s parliamentary elections.

Russia’s Federal Penitentiary Service has submitted a request to revoke a three-and-a-half-year suspended sentence which wrapped up in December and jail him instead.

They say he “systematically and repeatedly violated” the terms of his probation both whilst he was in Germany and on a number of occasions before.

If the court agrees, he could serve three-and-a-half-years in jail, minus a few months already spent under house arrest.

Mr Navalny has said: “[President Vladimir Putin’s] servants are acting as usual by fabricating new criminal cases against me.

“But I’m not interested in what they’re going to do to me. Russia is my country, Moscow is my city and I miss it.”

On top of that, Russia’s investigative committee has opened a new criminal case accusing him of the supposed misallocation of crowd-sourced funds at his RBK anti-corruption foundation.

“If they really want to go after him, this would be the worst case scenario,” said his lawyer Vadim Kobzev.

“Three-and-a-half-years and then 10 years on top of that which is the maximum he can get for this new criminal case.”

He thinks a jail term of that length is unlikely. Recent cases against Mr Navalny have all resulted in suspended sentences, “but we’re all trying to read the tea leaves here,” Mr Kobzev said.

The authorities’ most likely course of action – at least in the medium term – will be extended periods under house arrest with restrictions placed on, for example, his use of the internet.

Mr Navalny off-line is far less of a threat to Mr Putin’s cronies than the anti-corruption investigations he posts to his YouTube channel.

His team will endeavour to keep those going but it is not the same.

And suffice to say, despite the investigations into Mr Navalny’s own alleged wrong-doing, authorities have still refused to open any kind of inquiry into how exactly the symbol of Russia’s democratic opposition ended up fighting for his life on a work trip to Siberia, with a deadly novichok nerve agent coursing through his veins.

President Vladimir Putin’s glib comment that the FSB would have finished the job if they had really wanted him dead is no substitute.

Nor, as Mr Navalny so convincingly proved in a telephone call with one of the FSB officers tasked with cleaning up the evidence of his poisoning, is it true.