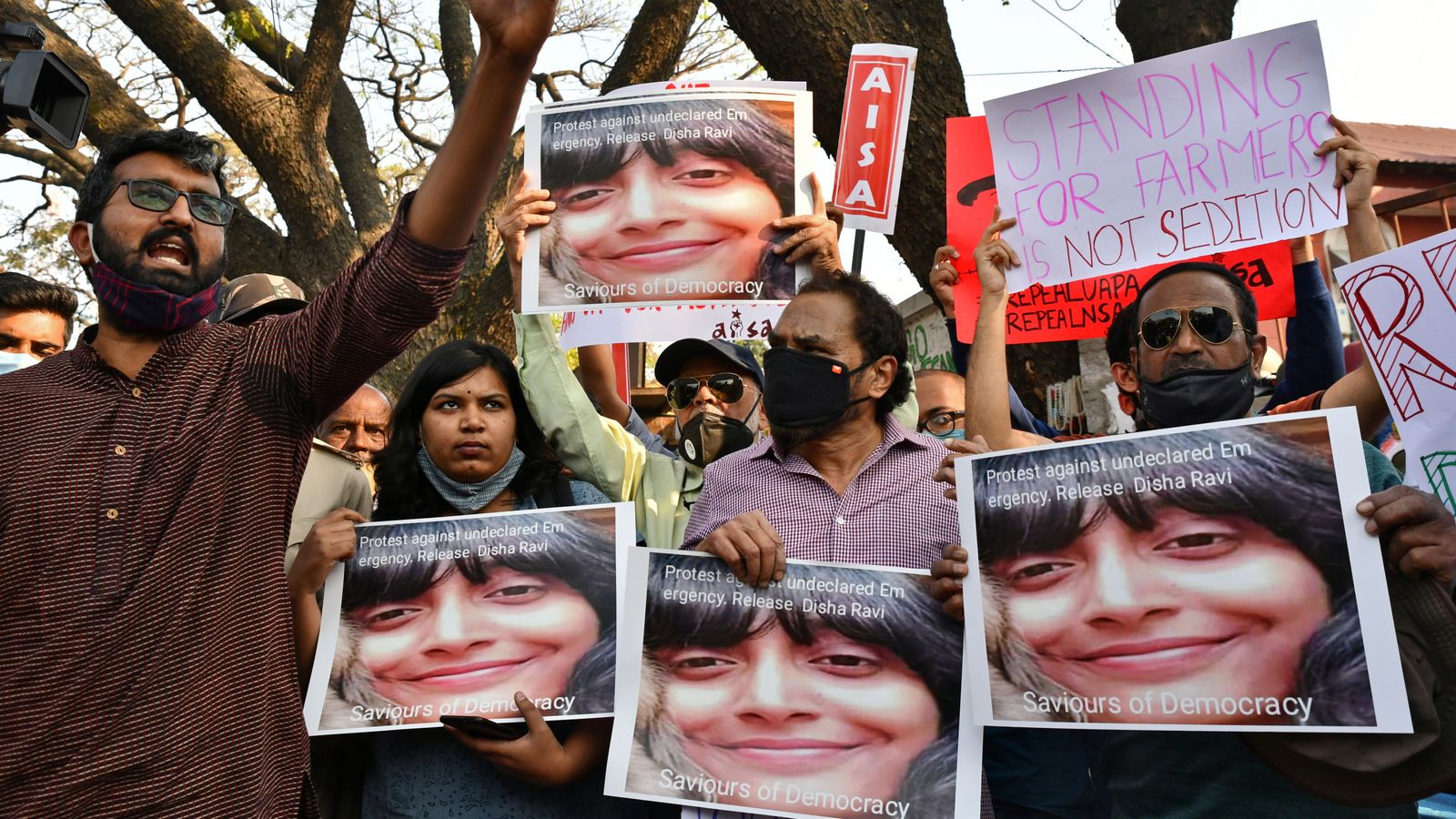 The arrest of a climate activist for circulating a document on social media supporting recent mass demonstrations by farmers has sparked further protests in India.

Disha Ravi, 22, is facing allegations that she helped edit and distribute the document.

Supporters have called her detention “an unprecedented attack on democracy”, saying it was designed to “scare away youngsters from raising their voice”.

Police, who arrested Ms Ravi in Bengaluru on Saturday, said the document spread misinformation about the farmer protests on the outskirts of New Delhi and “tarnished the image of India“.

They say Ms Ravi shared the document with Swedish teenage climate activist Greta Thunberg, who tweeted it earlier this month.

Fresh protests took place on Monday in the southern city of Bengaluru and in Mumbai, demanding Ms Ravi be freed.

Arvind Kejriwal, chief minister of Delhi, tweeted that Ms Ravi’s arrest was “an unprecedented attack on democracy” and that “supporting our farmers is not a crime”.

Leo Saldanha, a member of the Environment Support Group in Bengaluru, said: “This is their way of trying to scare away youngsters from raising their voice about anything.

“This sends a message to all young people out there that, you know, shut up and stay at home or this is what is going to happen to you.”

The arrest has also attracted international condemnation, including from the niece of US vice president Kamala Harris, Meena Harris, who has criticised the Indian government for silencing activists.

Police have issued arrest warrants for two other activists, Nikita Jacob and Shantanu Muluk, saying the three created the document and shared it with others.

The government initially tried to discredit the protesting farmers, many of whom are Sikhs, saying they were motivated by religious nationalism.

Since November, tens of thousands of farmers have camped outside the capital and blocked roads as part of protests over new agricultural reform laws which they say will devastate their incomes.

It has posed a major challenge to Prime Minister Narendra Modi’s Hindu nationalist-led government, which claims the laws are needed to modernise Indian farming.

Abductors ‘threatened to shoot us’: Released Nigerian schoolgirls relive their mass kidnap terror
‘It’s one and done’: Single-dose Johnson & Johnson COVID vaccine cleared in the US
Trump’s political career should be dead and buried but this felt like a campaign rally
Gunmen release 27 teenage boys who were kidnapped from boarding school in Nigeria
EU leaders divided over vaccine passports to allow travel this summer