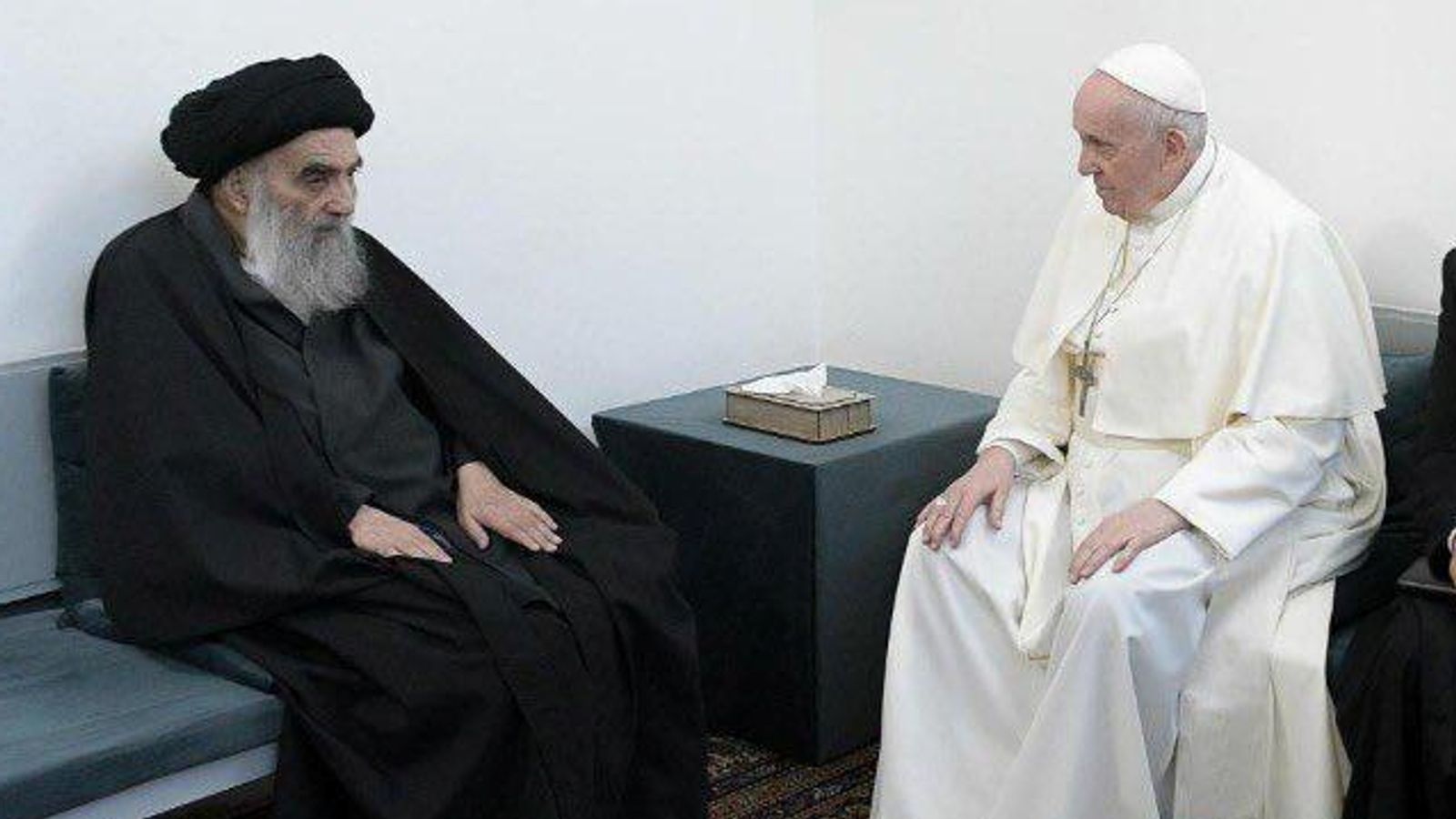 The Pope arrived at the cleric’s small home in a bullet-proof vehicle. As he entered the house, white doves were released, reflecting the themes of this four-day visit to Iraq – peace, reconciliation and inter-faith dialogue.

The meeting – the first of its kind between two such senior leaders in the Christian and Muslim world – was held privately and holds huge symbolism.

Al Sistani is revered by the Shia majority in Iraq but his influence across different sects and across the Muslim world runs deep.

Speaking yesterday in Baghdad, the Pope spoke of his desire for interfaith dialogue and religious tolerance at a time of increasing religious polarisation.

Francis said: “Only if we learn to look beyond our differences and see each other as one human family, will we be able to begin an effective process of rebuilding and leave to future generations a better, more just and more humane world.”

From Najaf the Pope travelled to Ur, the ancient archaeological site believed to be the birthplace of Abraham, the patriarch of the three monotheistic religions – Islam, Christianity and Judaism.

Day two of the visit ends with mass at the Chaldean cathedral in the capital, Baghdad.

Despite criticism about the timing of the trip, with the country experiencing a spike in coronavirus cases, Vatican officials and the Iraqi government say precautions are being taken. Crowds will be limited and social distancing enforced.

Yet in Christian communities in the north of the country, where the Pope will come tomorrow, the desire to see their Holy Father is strong and it’s hard to see how distancing will be maintained.

On Sunday the Pope will fly to the Kurdish city of Erbil before taking a helicopter to Iraq’s second city, Mosul.

The destroyed city was held by the so-called Islamic State for four years between 2014 and 2017. Its grand mosque of al Nouri, where ISIS leader Abu Bakr al Baghdadi declared his caliphate in 2014, is in pieces.

The most poignant part of the trip will be his visit to Christian towns desecrated under ISIS.

Iraq’s religious minorities including Christians and Yazidis have been persecuted for years and suffered terribly first under Al Qaeda and then ISIS.

In the 1990s, Iraq’s Christian population was about 1.5 million. It now stands at around 250,000. Thousands have been killed by extremists and many hundreds of thousands more forced to flee.