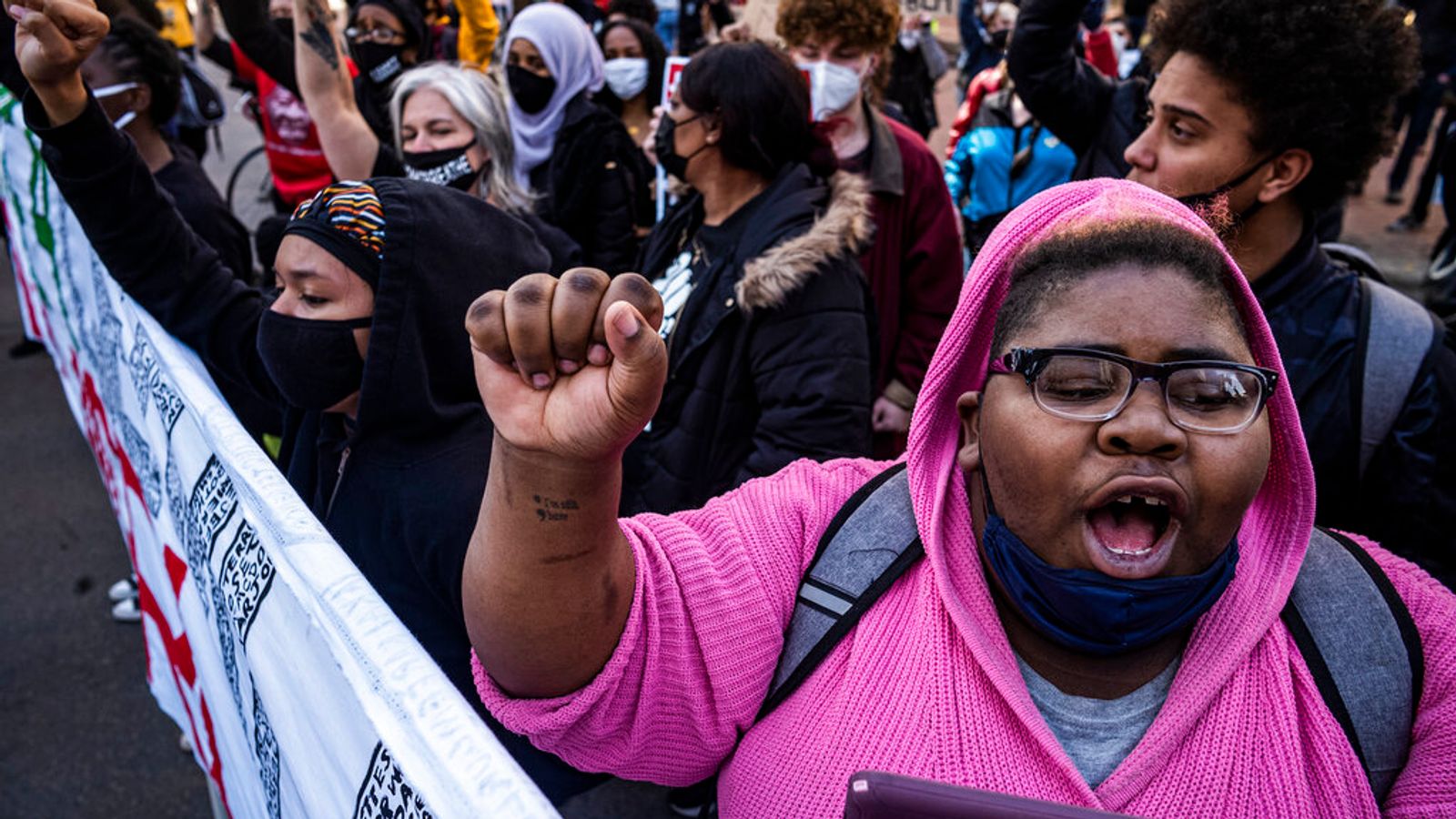 Emotions are higher than expectation outside court in Minneapolis.

People shouting for justice for George Floyd over an undercurrent of concern this trial won’t go their way.

His sister Bridgett Floyd, who was representing the family in court, addressed supporters outside: “He was so family oriented. He loved his family. He loved his daughter. Gianna meant the world to him.

“And we will never get that back. I want you guys to continue to pray for our family because we need it, we need it.”

This is a community deeply traumatised by the killing of George Floyd. There’s a sense a guilty verdict would go some way in helping them heal.

“There is no accountability when you’re this skin colour,” says Toshira Garraway, who runs a group supporting families against police violence. She has questions after the father of her child was found dead in 2009.

“We have to bank on this case because for so many of us we didn’t even get a trial,” Toshira tells me.


Protesters march ahead of Chauvin trial

Not everyone here is confident they’ll get the verdict they want. Minneapolis is a city on edge – the courthouse already heavily fortified and protected by the national guard.

Inside, the eyes of the world are following proceedings. Such is the level of interest this is the first criminal trial to be fully televised in the state of Minnesota.

The former police officer charged with the murder of George Floyd appeared in person on court cameras today. Dressed in a dark suit and face mask, Derek Chauvin took notes as he followed legal wrangling in court.

This would give the jury another avenue for conviction. Derek Chauvin’s legal team have appealed against this additional charge and that has delayed jury selection which was due to begin on Monday.

Selecting a jury was already going to be a lengthy process. Finding twelve impartial people in a community with such intense emotions around the issue of policing is already a challenge.

Potential jurors have already been asked their views on policing, if they ever attended any protests and how many times they viewed the video of Derek Chauvin with his knee on George Floyd’s neck.

In a city where nearly one in five people are black, it will be a challenge to find any that don’t already have an opinion on what happened to George Floyd.

The protests outside the courthouse have all been peaceful but there’s a deep mistrust in the police here and the demonstrators come with their own armed security and team of chaplains.

“And so we’re trying to bring more of a peaceful presence and be here knowing that people are coming with trauma.”

The intense public interest in this trial is two-fold – people want justice for George Floyd but a conviction would also represent a potential barometer for change in a country where police officers are rarely held accountable for brutality against black people.

The ruling will be defining not just for the Floyd family but for a whole community. In a trial that is expected to be one of the biggest in US history, only time will determine if it changes the course of racial injustice in America.